The Solar Satellite: MIB-UFO: Virtual Reality and Reality Tunnels. This is my contribution to an upcoming book on the Men in Black by Nick Redfern. 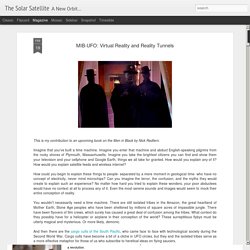 Imagine that you've built a time machine. Imagine you enter that machine and abduct English-speaking pilgrims from the rocky shores of Plymouth, Massachusetts. Imagine you take the brightest citizens you can find and show them your television and your cellphone and Google Earth, things we all take for granted. How would you explain any of it? How would you explain satellite feeds and wireless internet? The Secret Sun: Search results for kotze. I have a strange fetish for the ends of things - pop culture things, that is. 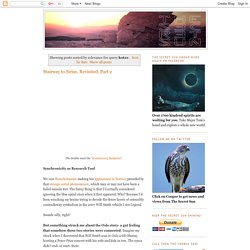 I call it the "LA Woman Phenomenon. " For some reason it seems as if creative endeavors define themselves as they close up shop. The Secret Sun: The Exegesis: Synchronicity, Semiotics and All-Seeing Eyes. Synchronicity is a wonderful and powerful thing. 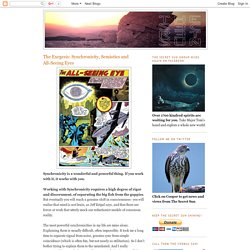 If you work with it, it works with you. Working with Synchronicity requires a high degree of rigor and discernment, of separating the big fish from the guppies. But eventually you will reach a genuine shift in consciousness- you will realize that mind is not brain, as Jeff Kripal says, and that there are forces at work that utterly mock our reductionist models of consensus reality. The most powerful synchronicities in my life are mine alone. Explaining them is usually difficult, often impossible. Synchronicity often comes in waves, often tied to astrological influence for some unknown reason. The Secret Sun: Beyond Synchronicity: Agency and Causality. There's a certain school of thought (let's call them School #1) that is willing to entertain the paranormal- psi, poltergeists, UFOs and so on- but does so in the context of a kind of unconventional interpersonal psychology. 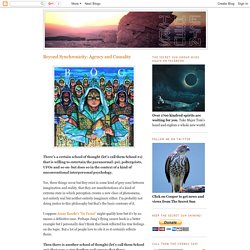 Yes, these things occur but they exist in some kind of grey zone between imagination and reality, that they are manifestations of a kind of extreme state in which perception creates a new class of phenomena, not entirely real but neither entirely imaginary either. The Secret Sun: Bowie: The Starman Returns to the Sky. The Legend is now complete. 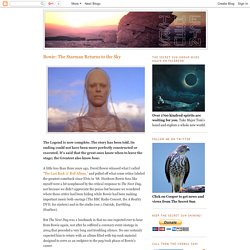 The story has been told, its ending could not have been more perfectly constructed or executed. The Secret Sun: You Don't Need Their Permission Anymore, Part 1. The final collapse of American popular culture-Nicki Minaj at the Grammy Awards I hadn't time to fully process Whitney Houston's death when I first posted on it. 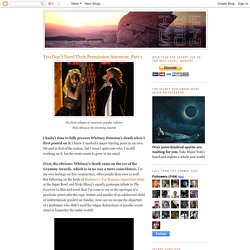 I knew it marked a major turning point in my own life and in that of the nation, but I wasn't quite sure why. The Secret Sun: Exegesis Addenda: Lessons Learned in a Modern Mystery Cult. When I wrote The Secret History of Rock ‘n’ Roll I spent a lot of time worrying that some might see it as a major detour from the work I was doing here on The Secret Sun. 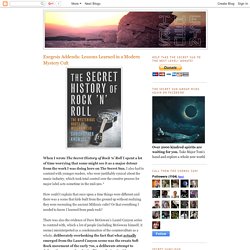 I also had to contend with younger readers, who were justifiably cynical about the music industry, which took total control over the creative process for major label acts sometime in the mid-90s. . * The Secret Sun: Memory Expansion. Lately I've been experimenting with a bit of active imagination before my hypnogogia sessions. 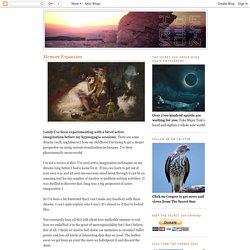 There are some dreams (well, nightmares) from my childhood I'm trying to get a deeper perspective on using various visualization techniques. I've been phenomenally unsuccessful.I'm not a novice at this- I've used active imagination techniques on my dreams long before I had a name for it. If you can learn to get out of your own way and let your unconscious mind break through it can be an amazing tool for any number of creative or problem-solving activities. Boutros Boutros-Ghali Dead at 93: His United Nations History.

The Egyptian diplomat Boutros Boutros-Ghali, whose five years at the helm of the United Nations was marked by war in Europe and genocide and famine in Africa, died on Tuesday at the age of 93. 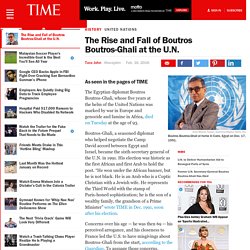 Boutros-Ghali, a seasoned diplomat who helped negotiate the Camp David accord between Egypt and Israel, became the sixth secretary general of the U.N. in 1991. His election was historic as the first African and first Arab to hold the post. “He won under the African banner, but he is not black. He is an Arab who is a Coptic Christian with a Jewish wife. He represents the Third World with the stamp of Paris-honed sophistication; he is the son of a wealthy family, the grandson of a Prime Minister” wrote TIME in Dec. 1991, soon after his election. 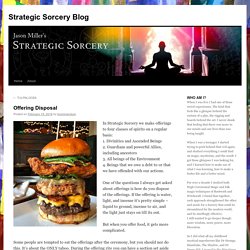 Joseph Stalin certainly thought so, which is why he sentenced Alexander Tchijevsky, the scientist who hypothesized that armed conflicts tended to ebb and flow in accordance with solar events, to a labor camp in Siberia for eight years for even daring to suggest such an outlandish idea. According to Tchijevsky, if human psychology can be reduced to physico-chemical processes in the brain, then, like other physico-chemical processes in nature, it can be directly influenced by its surroundings.

The book of Jubilees remarks that Jared or Yeh-red, an Old Testament patriarch, was so called because in his days the angels descended upon the earth - Yaw-rad "descend". It is interesting to note that "Jordan" comes from that same root word denoting "descent, coming down or falling" - Yar-dane "the place of the descent". The source of the Jordan river is Mount Hermon - the point of descent of the Watchers.

Mt. Hermon resides in the ancient land formally known as "Sidonia". The super-human angelic beings descended, created hybrid offspring with human women, the "nephilim" and mighty men of renknown preserved in ancient myths. Shadow Self: Embracing Your Inner Darkness. Beneath the social mask we wear every day, we have a hidden shadow side: an impulsive, wounded, sad, or isolated part that we generally try to ignore. The Shadow can be a source of emotional richness and vitality, and acknowledging it can be a pathway to healing and an authentic life. – C. Zweig & S. Wolf. Untitled. Have you ever dreamt of being a real artist? Have you ever wondered what it would be like to call yourself a real painter, or a real writer, or a real actress, or a real musician? Have you ever described yourself as someone who does something amazing and magical and wonderful and life-affirming and then added “on the side”?

Venus in Aquarius. The Secret Sun: Wizards, Workings and Walk-Ins: Born in Flames. Space/Gods: They Can't Be Sirius...(UPDATE 5/1) Oh sure, that's a normal news story. The Secret Sun: Demand the Impossible. Here's a description taken from Jeff's site. The Secret Sun: The Mythic, Mithraic Mysticism of Michael Clayton. Is an ancient myth masquerading as a legal thriller. The Secret Sun: Interlude: 'Tis a Magic Place.

NASA-Funded Study: Over 32 Advanced Civilizations Have Collapsed Before Us, And We’re Next In Line. As any long-time reader of this column knows, we routinely draw from historical lessons to highlight that this time is not different. Throughout the 18th century, for example, France was the greatest superpower in Europe, if not the world. How Delilah Conquered Radio By Listening To Her Listeners. The Secret Sun: Masonic Manhattan: I'll Be Home for Mithras. I wrote about the panoply of symbolism you see in Manhattan in "Pantheopolis," but the holiday season got me thinking about Mithras, the original reason for the season. I was considering Mithras today since WorldNetDaily linked to a story on the movement among Fundamentalists against Christmas.

Whether or not this will grow remains to be seen, especially with the popularity of the annual "War Against Christmas" panic among the Right. But it is true, Virginia, nothing about our modern celebration of Christmas is biblical and the total commercialization of Christmas has kicked it loose from any recognizable religious origins of any variety.