Hybrid warfare. Hybrid warfare is a military strategy that blends conventional warfare, irregular warfare and cyberwarfare.[1] By combining kinetic operations with subversive efforts, the aggressor intends to avoid attribution or retribution.[2] Hybrid warfare can be used to describe the flexible and complex dynamics of the battlespace requiring a highly adaptable and resilient response.[1][3] But it can also be to direct an influx of refugees to destabilize areas and regions in terms of economy and to create social unrest. 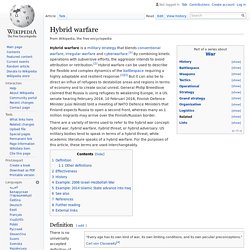 General Philip Breedlove claimed that Russia is using refugees to weakening Europe, in a US. senate hearing February 2016. 10 Februari 2016, Finnish Defence Minister Jussi Niinistö told a meeting of NATO Defence Ministers that Finland expects Russia to open a second front, whereas many as 1 million migrants may arrive over the Finnish/Russian border. There are a variety of terms used to refer to the hybrid war concept: hybrid war, hybrid warfare, hybrid threat, or hybrid adversary. The Alchemical Egg. The Secret Sun: The Holy Fool (UPDATED) The jingling of bells during the dance is meant to frighten evil spirits and the clashing of sticks represent the fight between good and evil. 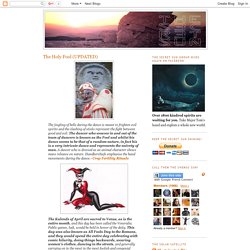 The dancer who weaves in and out of the team of dancers is known as the Fool and whilst his dance seems to be that of a random nature, in fact his is a very intricate dance and represents the naivety of man. A dancer who is dressed as an animal character shows mans reliance on nature. Handkerchiefs emphasise the hand movements during the dance.- Crop Fertility Rituals The Anglo-Saxons called April Oster-monath or Eostur-monath, the period sacred to Eostre or Ostara, the pagan Saxon goddess of spring, from whose name is derived the modern Easter.- Wikipedia It's probably no coincidence that April Fools' Day is celebrated at the same time that two other similar holidays are celebrated. In tribute to Attis, the priests of Cybele - known as Galli or Galloi - would castrate themselves and dress as women.

The Secret Sun: Week in Review: McKinnon, China's Ubermen in Space. ITEM:China has set some pretty tough standards for its astronaut corps: No scars, no history of serious illness in the last three generations of your family, and no tooth cavities. 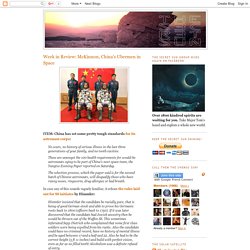 These are amongst the 100 health requirements for would-be astronauts vying to be part of China's next space team, the Yangtse Evening Paper reported on Saturday. The selection process, which the paper said is for the second batch of Chinese astronauts, will disqualify those who have runny noses, ringworm, drug allergies or bad breath. In case any of this sounds vaguely familiar, it echoes the rules laid out for SS initiates by Himmler: The Secret Sun: Transformers, part 2: Ultraterrestrials.

Angels=alien androids John Keel's work has been floating around in my head in a oblique way, as I continue to process all of the Keelian weirdness that's gripping the world. 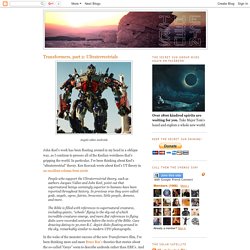 In particular, I've been thinking about Keel's "ultraterrestrial" theory. Ken Korczak wrote about Keel's UT theory in an excellent column from 2006: People who support the Ultraterrestrial theory, such as authors Jacques Vallee and John Keel, point out that supernatural beings seemingly superior to humans have been reported throughout history. In previous eras they were called gods, angels, ogres, fairies, brownies, little people, demons, and more.The Bible is filled with references to supernatural creatures, including giants, “wheels” flying in the sky out of which incredible creatures emerge, and more.But references to flying disks were recorded centuries before the texts of the Bible. This makes a lot of sense. The Secret Sun: Alchemy, The Joker and Rubeo. The always-revelatory Inside the Cosmic Cube is looking into the alchemical origins of the Joker. 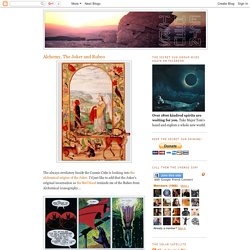 I'd just like to add that the Joker's original incarnation as the Red Hood reminds me of the Rubeo from Alchemical iconography... Also, it seems that Heath Ledger had read The Killing Joke DRE: Have you read many Batman comics? Modern Pagan News & Commentary. The Secret Sun: Fireworks (UPDATES) Ah, subtlety. 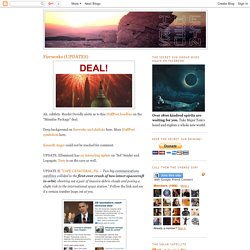 Reader Davidly alerts us to this HuffPost headline on the "Stimulus Package" deal. Deep background on fireworks and obelisks here. More HuffPost symbolism here. Kenneth Anger could not be reached for comment. UPDATE: Elluminati has an interesting update on "Sol" Sender and Logogate. UPDATE II: "CAPE CANAVERAL, Fla. – Two big communications satellites collided in the first-ever crash of two intact spacecraft in orbit, shooting out a pair of massive debris clouds and posing a slight risk to the international space station. " Click to enlarge. The Secret Sun: How Did They Hear What I Was Dreaming? The art I am most entranced by is the art I feel was stolen from my dreams. 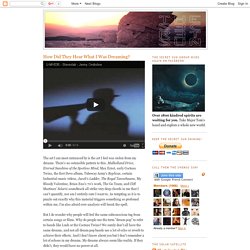 There's no ostensible pattern to this. Mulholland Drive, Eternal Sunshine of the Spotless Mind, Max Ernst, early Cocteau Twins, the first Devo album, Tubeway Army's Replicas, certain Industrial music videos, Jacob's Ladder, The Royal Tannebaums, My Bloody Valentine, Brian Eno's 70's work, The Go Team, and Cliff Martinez' Solaris soundtrack all strike very deep chords in me that I can't quantify, nor am I entirely sure I want to. As tempting as it is to puzzle out exactly why this material triggers something so profound within me, I'm also afraid over-analysis will break the spell.

AstroGnostic: Trapped Here on this Alien World-UPDATED!!! NOTE: Scroll to bottom of post for important update. 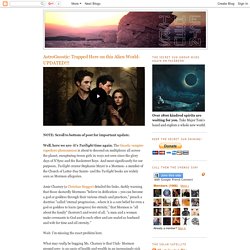 Well, here we are- it's Twilight time again. The Gnostic vampire-superhero phenomenon is about to descend on multiplexes all across the planet, enrapturing tween girls in ways not seen since the glory days of N'Sync and the Backstreet Boys. And most significantly for our purposes, Twilight creator Stephanie Meyer is a Mormon- a member of the Church of Latter-Day Saints- and the Twilight books are widely seen as Mormon allegories. Amie Charney (a Christian blogger) detailed the links, darkly warning that those dastardly Mormons "believe in deification – you can become a god or goddess through their various rituals and practices," preach a doctrine "called “eternal progression...where it is a core belief for even a god or goddess to learn (progress) for eternity," that Mormon is "all about the family" (horrors!)

The Fool Card in Tarot - Tarot. You might surmise that the Fool would be card number one of the Major Arcana. 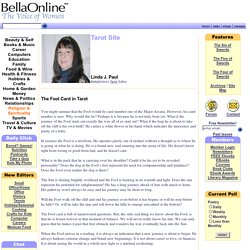 However, his card number is zero. Why would this be? Perhaps it is because he is not truly born yet. The Secret Sun: Up From the Underworld. Heath Ledger's untimely death has people talking about the various symbols that are always put into play from events like this. 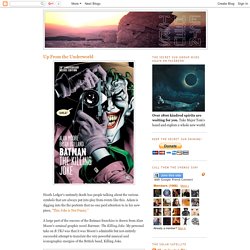 Adam is digging into the the portents that no one paid attention to in his new piece, "This Joke is Not Funny. " A large part of the success of the Batman franchise is drawn from Alan Moore's seminal graphic novel Batman: The Killing Joke. My personal take on B:TKJ was that it was Moore's admirable but not-entirely successful attempt to translate the very powerful musical and iconographic energies of the British band, Killing Joke. As I've written in the past, Moore's interest in the occult world was probably heavily inspired by the band, who were talking these themes up many years before Moore himself.

The Secret Sun: Secret Sun Data Dump: Watching the Nines (UPDATED) The big event of 9/9/9 was Barack Siskobama's health care speech, which may or may not signal his political resurrection. He let his worst opponents run wild over the summer which severely dampened the morale of his base. But he's been known to use playin' possum as a political technique, so it will be interesting to see if apparent return to form is all part of some ritual cycle. In that light, the photo credit there is certainly interesting. The first numbers we heard from the New Tut were 700,000 and 1943 (=17). 17 is the 7th prime number. The Secret Sun: Newsstand Oracle. When I was a kid my life revolved around Valles' News (pronounced Valis' News). It was one of those old-school variety stores that even had a lunch counter in my early days.

It's where I got my periodical scriptures- comic books, MAD magazines and Creem- as well as the sugar and caffeine overdoses needed to best process it all. The Secret Sun: The Ancient Astronauts Are Coming Back... The Secret Sun: Seventeen Minutes. The Secret Sun: Revel and Ritual in the Post-Prosperity Age (UPDATE) In America, one of the lingering legacies of our Puritan roots is a simultaneous mistrust and economic exploitation of holidays and festivals. It really wasn't until the late 19th Century that holidays like Christmas and Halloween became popular- or even tolerated in some quarters.

We've seen this conjunction- an obvious phallus and womb- for millennia, and in everything from St. The Curious Case of John Carter: Secrets and Synchronicities. It's generally a tradition here on The Secret Sun to look at movies long after they've been in the theaters, usually because I like to take the time to analyze them on my computer screen. I also like to be able to post screenshots with captions, since what's being said is often as important as what's being shown. The Secret Sun: Space/Gods: Mars, Moonshots and Masonry (UPDATED 1400 EST) Aldrin had put forth his proposals at a Mars summit in Plymouth, England, a fact which definitely caught my attention. For some reason, Plymouth and Mars seem to be very intimately linked.

I uncovered this strange connection back in December: it set my hidden agenda detector a-pinging. The Secret Sun: Ritual Drama: Solaris, or Cybele and Attis in Space. Spoiler alert: This article contains spoilers for Solaris. One of the many reasons I pay careful attention to commentary tracks on DVDs is to hear writers and directors explain what the film they made is supposed to be about. And one thing that always puzzles me is when the creators don't seem exactly sure what their film is saying.

The Secret Sun: Osiris, The Oscars and The Babylon Gate. The Academy Awards are being held this Sunday night. They don't seem to have the same cultural cache they once did, but we can say the same about Hollywood itself. So What? A Very Sirius Election: Bringing it All Back Home. Angelic beings descend to Earth from Sirius in classic Masonic Tracing Board Ancient Egyptian historians will tell you quite soberly that for thousands of years the gods themselves walked the earth and ruled their land. The Secret Sun: Space/Gods: The Pyramid of Apollo (UPDATED) The Secret Sun: The Secret Sun Best of the Zeros: Music.

Hidden experience: interview with Richard Dolan on the owl book. Visiting Scarfolk, the Most Spectacular Dystopia of the 1970s. Survivorship.Org. Breath Awareness: 4 Insights On How Breath Can Provide Mind-Body Healing Benefits. Mindfulness Beats Conventional Treatments For Lower Back Pain.