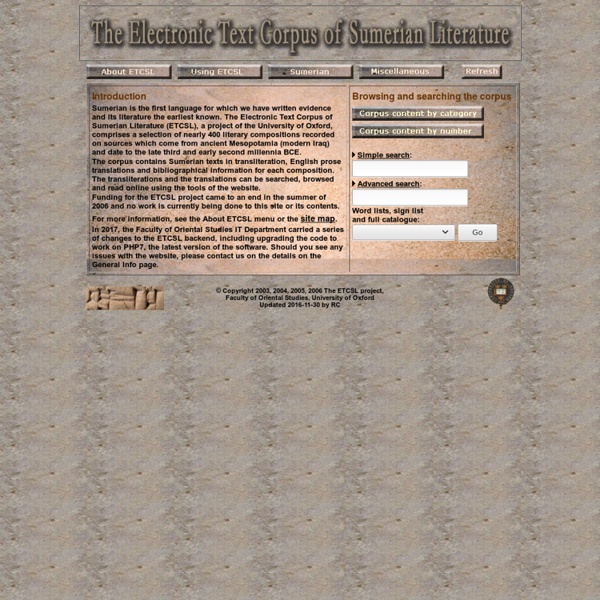 DESCENT OF THE GODDESS ISHTAR INTO THE LOWER WORLD Return to Ancient Near East index Return to Main Index DESCENT OF THE GODDESS ISHTAR INTO THE LOWER WORLD [From The Civilization of Babylonia and Assyria, M. Jastrow, 1915] To the land of no return, the land of darkness, Ishtar, the daughter of Sin directed her thought, Directed her thought, Ishtar, the daughter of Sin, To the house of shadows, the dwelling, of Irkalla, To the house without exit for him who enters therein, To the road, whence there is no turning, To the house without light for him who enters therein, The place where dust is their nourishment, clay their food.' They have no light, in darkness they dwell. "Gatekeeper, ho, open thy gate! Let the palace of the land of no return rejoice at thy presence! He bade her enter the first gate, which he opened wide, and took the large crown off her head: "Why, O gatekeeper, dost thou remove the large crown off my head?" [The second half of the poem, the reverse of the tablet, continues is follows:]

Sumerian Language Page - Мозилин фајерфокс (Mozilla Firefox) E Pluribus Unum - History of Motto Carried by Eagle on Great Seal Origin and Meaning of the Motto Carried in the Beak of the Bald Eagle on the Great Seal E pluribus unum is the motto suggested by the committee Congress appointed on July 4, 1776 to design "a seal for the United States of America." The below sketch of their design accompanied a detailed description of their idea for the new nation's official emblem. A motto's purpose is to express the theme of a seal's imagery – especially that of the shield. The center section of this shield has six symbols for "the Countries from which these States have been peopled": the rose (England), thistle (Scotland), harp (Ireland), fleur-de-lis (France), lion (Holland), and an imperial eagle (Germany). Linked together around the shield are 13 smaller shields, each with the initials for one of the "thirteen independent States of America." On August 20, 1776, this first committee submitted their Great Seal design to Congress (including Benjamin Franklin's idea for the reverse side).

Sumerian Mythology FAQ by Christopher Siren, 1992, 1994, 2000 cbsiren at alum dot mit dot edu This FAQ used to be posted on the third of every month to alt.mythology. An older text copy of this FAQ is available via anonymous ftp pending *.answers approval at: rtfm.mit.edu at /pub/usenet/news.answers/mythology/sumer-faq last changes: July 27, 2000: complete revision including incorporating Kramer's Sumerian Mythology and Black & Green's God's Demons and Symbols of Ancient Mesopotamia. Adapa (Dan Sullivan) has constructed a more complete Sumerian-English dictionary at: (Restored! I have constructed a rudimentary Sumerian-English, English Sumerian glossary using Kramer's The Sumerians and Jacobsen's Treasures of Darkness, although parties interested in the Sumerian language may be better served at the prior two pages. note: This FAQ is partly based on an anthropology paper which I wrote in 1992, using some of the sources detailed below. Contents: I. History Culture

Akkadian language (Babylonian and Assyrian cuneiform texts) Home page (DUB.E = tuppi bitim, 'home clay tablet') on Akkadian, an introduction collected by John Heise. Akkadian is a great cultural language of world history. These pages are about the cuneiform writing system on clay tablets, the language, the grammar. Some texts examples with transliteration and explanation are presented. 'secondly', 'once again', 'variant', (a word the ancient scribes used to mark another version) This variant now with a bird's eye view on Mesopotamia and its history (4th, 3rd millennium so far). Welcome! Last change Feb 17 1996, see [ What's new], [ Prefatory notes] Quick to the chapters [Index] [ Intro] [ Mesopotamia] [ Texts] [ Cuneiform] [ Language] [ Books] [ Links] [Title caption, a mini course in Akkadian cuneiform] Babylonian and Assyrian cuneiform texts, an introduction collected by John Heise. These pages should run well with Netscape, but may give problems with other browsers (I am using TABLEs). ) stand for the long vowels. Book references 1.

Ministries of Nineteen Eighty-Four - oh my God the BBC is literally playong out ministry of truth propaganda just as Orwell exposed The Ministry of Peace concerns itself with war, the Ministry of Truth with lies, the Ministry of Love with torture and the Ministry of Plenty with starvation. These contradictions are not accidental, nor do they result from ordinary hypocrisy: they are deliberate exercises in doublethink.— Part II, Chapter IX Ministry of Love[edit] The Ministry of Love, like the other ministries, is misnamed, since it is largely responsible for the practice and infliction of misery, fear, suffering and torture. In a sense, however, the name is apt, since its ultimate purpose is to instill love of Big Brother—the only form of love permitted in Oceania—in the minds of thoughtcriminals as part of the process of reverting them to orthodox thought. This is typical of the language of Newspeak, in which words and names frequently contain both an idea and its opposite; the orthodox party member is nonetheless able to resolve these contradictions through the disciplined use of doublethink. Room 101[edit]

BBC race storm as white people blocked from Radio 1 trainee scheme The 12-month position at Radio 1's Newsbeat is only available to candidates from a black, Asian or non-white ethnic minority background. The trainee position at the taxpayer-funded broadcaster is described as "the ideal environment for multi-media training" for up-and-coming journalists. The job advert was posted online by Creative Access, a company hoping to boost the number of ethnic minority people working in the media. It has sparked a wave of criticism of social media, with some users accusing the BBC of discrimination and racism. Twitter user Victoria wrote: "My nephew would like to apply, he's fair-skinned though. "How should I tell him he doesn't qualify? "Alternatively, does BBC host these schemes acknowledging it recruits according to skin colour, and therefore has to balance its discrimination with non-white training schemes?" Adam Stanley said: "Why can't I apply? And James Bruce said: "Oh dear. "This is not a job, but simply a training and development opportunity.

Why so many blacks in commercials and TV shows?