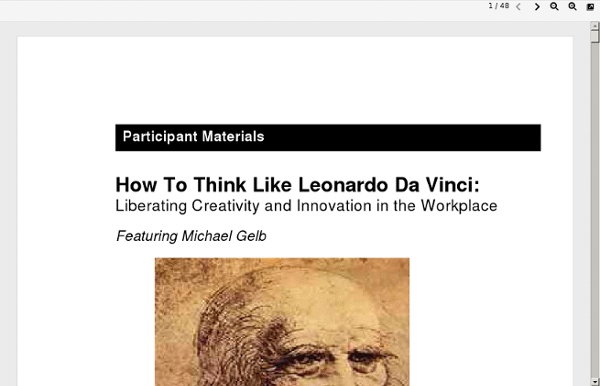 How to Think Like Leonardo Da Vinci Edit Article Cultivating CuriosityThinking ScientificallyPracticing Creativity Edited by LifeOptimizer.org, Krystle, Teresa, Sondra C and 28 others Leonardo da Vinci was the ultimate Renaissance man: an accomplished scientist, mathematician, engineer, inventor, anatomist, painter, sculptor, architect, botanist, musician, and writer. How to Think Like a Genius Edit Article One Methods:Metaphorming: The Official "Think Like a Genius"® Method There are many ways to classify a genius. But if you look at the historical figures whom most people would consider geniuses, such as Albert Einstein, Leonardo Da Vinci, and Beethoven, you can see one thing they all share in common: they were all able to think in a way different from the mainstream, and thus made connections that no one else did.

40 websites that will make you cleverer right now The indexed web contains an incredible 14 billion pages. But only a tiny fraction help you improve your brain power. Here are 40 of the best. whizzpast.com – Learn about our awe inspiring past all in one wonderful place. Reinventing Discovery: The New Era of Networked Science Reinventing Discovery: The New Era of Networked Science is a book written by Michael Nielsen and released in October 2011. It argues for the benefits of applying the philosophy of open science to research. Summary[edit] The following is a list of major topics in the book's chapters. appendix - The problem solved by the Polymath Project Reviews[edit]

Naked female scientist tries to tame beluga whales in the arctic By Daily Mail Reporter Created: 23:47 BST, 15 June 2011 Braving sub-zero temperatures, she has thrown caution — and her clothes — to the wind to tame two beluga whales in a unique and controversial experiment. Natalia Avseenko, 36, was persuaded to strip naked as marine experts believe belugas do not like to be touched by artificial materials such as diving suits. The skilled Russian diver took the plunge as the water temperature hit minus 1.5 degrees Centigrade. The beauty of nature: Like a scene from a classic pre-Raphaelite painting, naked Natalia Avseenko swims with beluga whales in the Arctic Belugas are famed for the way in which their faces are able to convey human-like expressions.

Technologies of Qi – Energy Flows Where Attention Goes Can we direct Qi (or Chi) into our bodies using the power of imagination? The ancient practitioners of Tai Chi and Qigong definitely thought so. They taught that the flow of Qi energy is directe d by the mind, and it is through our imagination, that Qi is first felt, then reinforced. In their understanding of Qi, the mind and body cannot be separated. Beginning students learn to imagine Qi as a tingling sensation in the limbs, torso and palms of the hand, and then direct this sensation through the bodies meridians or energy pathways.

Creativity Quotes From Mycoted The quotations here fall into two main categories. The first category is from people who have had a very restricted vision, with hindsight their comments can be used as powerful examples of what can happen if you don't allow creative thoughts to flourish. The second category is from people who have had a much more creative, open view of life. "Computers in the future may weigh no more than 1.5 tons." --Popular Mechanics, forecasting the relentless march of science, 1949 "I think there is a world market for maybe five computers." One OccupyWallStreet graph to rule them all Since the year of my birth the working class has gotten NOTHING while the wealthiest 1% have taken EVERYTHING. And this graph stops at 2007, right before the biggest crash since the Great Depression. I can only imagine how much worse things look from a statistical view since then when it comes to graphing income inequality. When people ask "What are demands of #OccupyWallStreet?" I'd like to point to this graph and let them try to figure it out for themselves. It is not that hard to see why anti-corporate greed protesters are out in the streets fighting to be heard.

Yoga & Magical Thinking: A Defense Lets face it, when it comes to magical thinking, yoga people are some of the worst perpetrators around. Author and yogi Matthew Remski is right on the money when he observes “the facebook status updates that define yoga culture can be summed in one line. As I think so I shall be”.