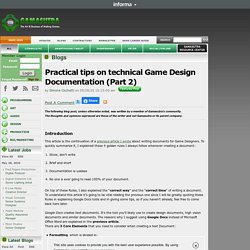 The thoughts and opinions expressed are those of the writer and not Gamasutra or its parent company. This article is the continuation of a previous article I wrote about writing documents for Game Designers. To quickly summarize it, I explained these 4 golden rules I always follow whenever creating a document: Show, don’t write Brief and short Documentation is useless No one is ever going to read 100% of your document. On top of these Rules, I also explained the “correct way” and the “correct time” of writing a document. Google Docs creates text documents. Rafael Vazquez's Blog - 5 Practical game design tools to help design your game. The following blog post, unless otherwise noted, was written by a member of Gamasutra’s community. 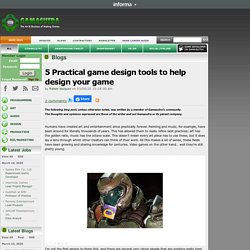 The thoughts and opinions expressed are those of the writer and not Gamasutra or its parent company. Humans have created art and entertainment since practically forever. Painting and music, for example, have been around for literally thousands of years. This has allowed them to really refine best practices; art has the golden ratio, music has the octave scale. This doesn’t mean every art piece has to use these, but it does lay a lens through which other creators can think of their work. Alvaro Salvagno's Blog - Inspiration is an excuse : practical tools for game designers. The following blog post, unless otherwise noted, was written by a member of Gamasutra’s community. 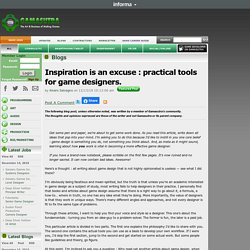 The thoughts and opinions expressed are those of the writer and not Gamasutra or its parent company. Get some pen and paper, we’re about to get some work done. As you read this article, write down all ideas that pop into your mind. I’m asking you to do this because I’d like to instill in you one core belief : game design is something you do, not something you think about. And, as meta as it might sound, learning about how you work is vital in becoming a more effective game designer. Here’s a thought : all writing about game design that is not highly opinionated is useless — see what I did there? I’m obviously being facetious and mean-spirited, but the truth is that unless you’re an academic interested in game design as a subject of study, most writing fails to help designers in their practice.

Through these articles, I want to help you find your voice and style as a designer. The Concept. Daniel Cook: Game Design Theory I Wish I had Known When I Started. CreatingMinds - tools, techniques, methods, quotes and quotations on all matters creative. Paul Tozour's Blog - Decision Modeling and Optimization in Game Design, Part 8: Graph Search. World is set up. 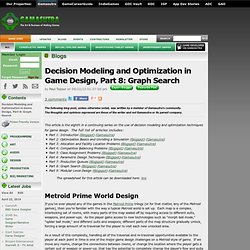 Each map is a complex, interlocking set of rooms, with many parts of the map sealed off by requiring access to different suits, weapons, and power-ups. As the player gains access to new technologies such as "morph ball mode," "spider ball mode," and different suits and weapons, different parts of the map structure gradually unlock, forcing a large amount of re-traversal for the player to visit each new unlocked area. As a result of this complexity, handling all of the traversal and re-traversal opportunities available to the player at each point in time is one of the major game design challenges on a Metroid style of game. If we move any rooms, change the connections between rooms, or change the location where the player gets a certain suit or weapon or power-up, that has the potential to completely change the player's flow and quite possibly break the game.

4 Powerful Game Development Tools. September 20th, 2012 When making a game, you want to : Work efficiently and quicklyEasily organize and keep track of your ideasSee your game in action as soon as possibleEasily test if the final product matches to your Game Design In this article, I present 4 powerful game development tools that you can use to achieve the 4 goals stated above. 1) Game Design document (GDD) Update 23/03/2013 : some of my ideas here about game design documents may be outdated, check this article for more up-to-date ideas. 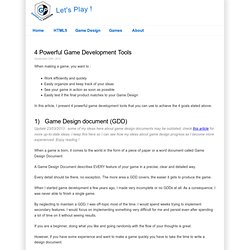 Starting From Scratch: Five Tips for Better Game Design. Features - A Producer's 10 Lessons Learned the Hard Way. [Experienced Sony Computer Entertainment Europe producer David Manuel shares the secrets he's learned from years of seeing developers fail to learn from the mistakes they've made on projects in the past, and offers suggestions on the key learnings to integrate into your production process.] 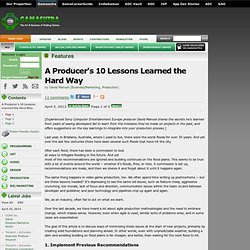 Last year, in Brisbane, Australia, where I used to live, there were the worst floods for over 30 years. And yet over the last few centuries there have been several such floods that have hit the city. After each flood, there has been a commission to look at ways to mitigate flooding in the future. And yet most of the recommendations are ignored and building continued on the flood plains. Risk and Reward Deluxe « #AltDevBlogADay. I recently came across a quote from Cliff Bleszinski (source forgotten) where he contemplated that he’d rather have other game designers ripping off Gears of War’s “active reload” mechanic than its cover-based shooting. 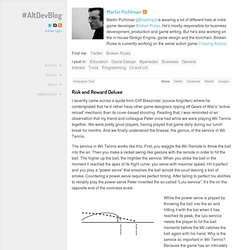 Reading that, I was reminded of an observation that my friend and colleague Peter once had while we were playing Wii Tennis together. We were pretty good players, having played that game daily during our lunch break for months. And we finally understood the finesse, the genius, of the service in Wii Tennis. The service in Wii Tennis works like this: First, you waggle the Wii Remote to throw the ball into the air. Then you make a racket swing-like gesture with the remote in order to hit the ball.

Tools for Creation. Tools for Ideation.