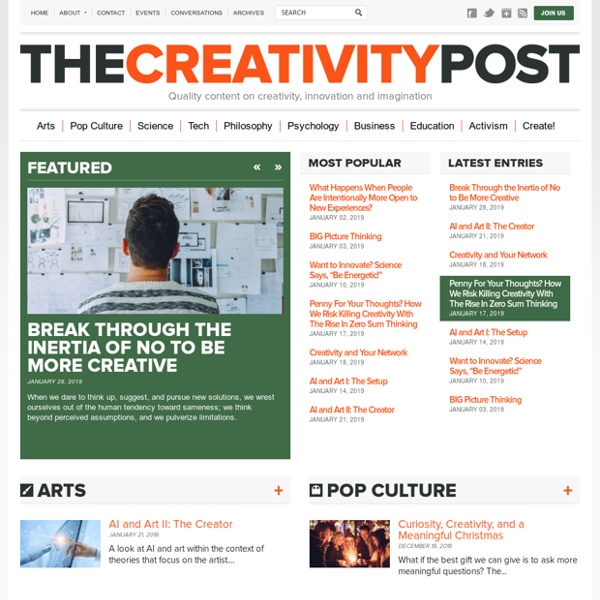 From Evaluation to Inspiration January 13, 2014 It's time to shift from a culture of evaluation to a culture of inspiration. Failure: The Good F-Word January 10, 2014 The value of failure is that it creates a dent in our usual routines and propels us to re-evaluate our strengths, as well as seek out new creative solutions. No one can escape life´s inevitable curve balls, but perhaps by meeting them with the right mindset—with an awareness of our underlying strength and adaptability—we can learn to embrace adversities, and harness their capacity to lead to greater well-being and resilience. What’s Sparking Me Now January 08, 2014 I am everyday surprised, humbled, and giddy excited about bike commuting and its impact on creativity, people, and cities across the world – specifically on local community connectivity, release and mindfulness, manufacturing, and fashion.

How to Start a Novel Time to confess: I’m a closet novelist. For the last six years, I’ve been sitting on a great plot, but I find the idea of writing a novel daunting. A few days ago, my best friend said to me, “You should write your novel this year. You know, the one where the young woman is in a bus in Rio de Janeiro, and she suddenly hears…” “You remember the story? But I told you about it six years ago!” The 10 habits of highly creative people, applied to creative companies « Marketing Babylon The book Creativity : Flow and the Psychology of Discovery and Invention (previously titled: Creativity: The Work and Lives of 91 Eminent People) contains an exploration of the common personality traits of creative people. The traits are articulated as a series of ten paradoxes. Before listing them, he writes: Of all human activities, creativity comes closest to providing the fulfillment we all hope to get in our lives.

DIY Urbanism Competition Call for Artists Now Available « Pop UP Pearl 22 Mar Park(ing) Day, San Francisco. [photo courtesy of SPUR] 5 Lessons From a Tragedy Photo by Vanessa Paxton The world is full of suffering. It is also full of overcoming it. ~Helen Keller My beautiful state, the one I’ve called home for all of my life, is burning.

60 Historical Photos Worth 1000 Words The American newspaper editor Arthur Brisbane said that “a picture is worth a thousand words” in 1911. Over 100 years later, this still rings true. Each photograph tells a story, a special event or moment, and helps us witness the past. From historical landmarks and well-known people to the basic daily routines of the past, these 60 pictures have lessons for us, and portray the past in a way that we can empathize with and understand it more intimately. Lateral thinking Lateral thinking is solving problems through an indirect and creative approach, using reasoning that is not immediately obvious and involving ideas that may not be obtainable by using only traditional step-by-step logic. The term was coined in 1967 by Edward de Bono. [1] According to de Bono, lateral thinking deliberately distances itself from standard perceptions of creativity as either "vertical" logic (the classic method for problem solving: working out the solution step-by-step from the given data) or "horizontal" imagination (having many ideas but being unconcerned with the detailed implementation of them).

Gallery Introduction At Except, we use VUE almost every day; because of its simplicity, we have found it to be the most useful tool available for quickly making system maps and causal loop diagrams. Click for full image 30 Incorrectly Used Words That Can Make You Look Bad While I like to think I know a little about business writing, I often fall into a few word traps. For example, "who" and "whom." I rarely use "whom" when I should.