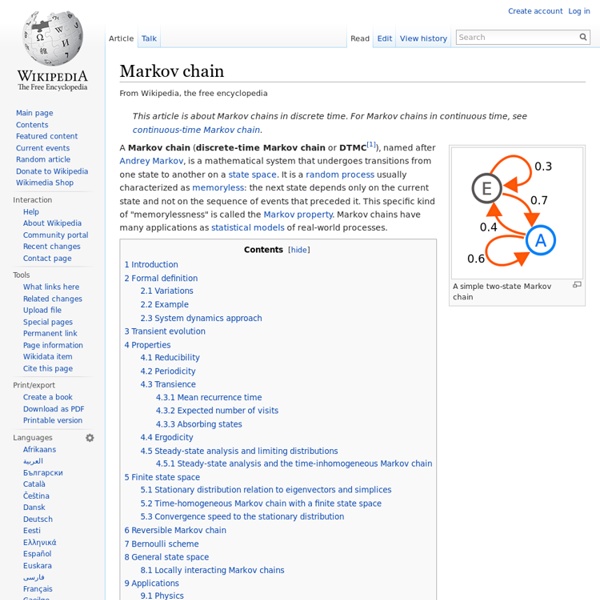 A simple two-state Markov chain A Markov chain (discrete-time Markov chain or DTMC[1]), named after Andrey Markov, is a mathematical system that undergoes transitions from one state to another on a state space. It is a random process usually characterized as memoryless: the next state depends only on the current state and not on the sequence of events that preceded it. This specific kind of "memorylessness" is called the Markov property. Markov chains have many applications as statistical models of real-world processes. Introduction[edit] A Markov chain is a stochastic process with the Markov property. In literature, different Markov processes are designated as "Markov chains". The changes of state of the system are called transitions. A discrete-time random process involves a system which is in a certain state at each step, with the state changing randomly between steps. Many other examples of Markov chains exist. Formal definition[edit] . . of states as input, where is defined, while and Related:  Art & Technology

Google search: 15 hidden features 3. Conversions Currency conversions and unit conversions can be found by using the syntax: <amount><unit1> in <unit2>. So for example, you could type '1 GBP in USD', '20 C in F' or '15 inches in cm' and get an instant answer. 4. Search for 'time in <place>' and you will get the local time for that place, as well as the time zone it is in. 5. A quick way to translate foreign words is to type 'translate <word> to <language>'. 6. If you know you are looking for a PDF or a Word file, you can search for specific file types by typing '<search term> filetype:pdf' or '<search term> filetype:doc' 7. If you type in a flight number, the top result is the details of the flight and its status. 8. Search for film showings in your area by typing 'films' or 'movies' followed by your postcode. 9. 10. When you're enter a search term that has a second meaning, or a close association with something else, it can be difficult to find the results you want. 11. 12. 13. 14. 15.

Predator takes visual object tracking to new heights – Computer Chips & Hardware Technology Cameras have slowly made their way into the portable gadgets we all carry around with us and not having a camera in a new device is viewed as a missing feature. It’s got to the point now where the latest smartphones even have two cameras so as to make for better video chat. But while the prevalence and quality of the cameras has gone up, the software still lags behind in terms of being able to identify and track objects in any real-time or captured footage. That is about to change due to the work of Czech student Zdeneki Kalai. This algorithm not only tracks, it learns the more it gets used. Kalai believes what he has created, a combination of tracking, learning, and detection is completely unique and allows for a whole new set of functionality to be applied when looking at video feeds. In the video he gives examples of a new interface that can detect your fingers and use them to draw, learning to get better at trakcing those fingers as it is used more. Read more at GottaBeMobile

Random walk Example of eight random walks in one dimension starting at 0. The plot shows the current position on the line (vertical axis) versus the time steps (horizontal axis). A random walk is a mathematical formalization of a path that consists of a succession of random steps. For example, the path traced by a molecule as it travels in a liquid or a gas, the search path of a foraging animal, the price of a fluctuating stock and the financial status of a gambler can all be modeled as random walks, although they may not be truly random in reality. Various different types of random walks are of interest. . is defined for the continuum of times . Lattice random walk[edit] A popular random walk model is that of a random walk on a regular lattice, where at each step the location jumps to another site according to some probability distribution. One-dimensional random walk[edit] An elementary example of a random walk is the random walk on the integer number line, This walk can be illustrated as follows. .

Independent and identically distributed random variables The abbreviation i.i.d. is particularly common in statistics (often as iid, sometimes written IID), where observations in a sample are often assumed to be effectively i.i.d. for the purposes of statistical inference. The assumption (or requirement) that observations be i.i.d. tends to simplify the underlying mathematics of many statistical methods (see mathematical statistics and statistical theory). However, in practical applications of statistical modeling the assumption may or may not be realistic. To test how realistic the assumption is on a given data set the autocorrelation can be computed, lag plots drawn or turning point test performed.[2] The generalization of exchangeable random variables is often sufficient and more easily met. The assumption is important in the classical form of the central limit theorem, which states that the probability distribution of the sum (or average) of i.i.d. variables with finite variance approaches a normal distribution. Examples[edit]