A 5-Step Technique for Producing Ideas circa 1939 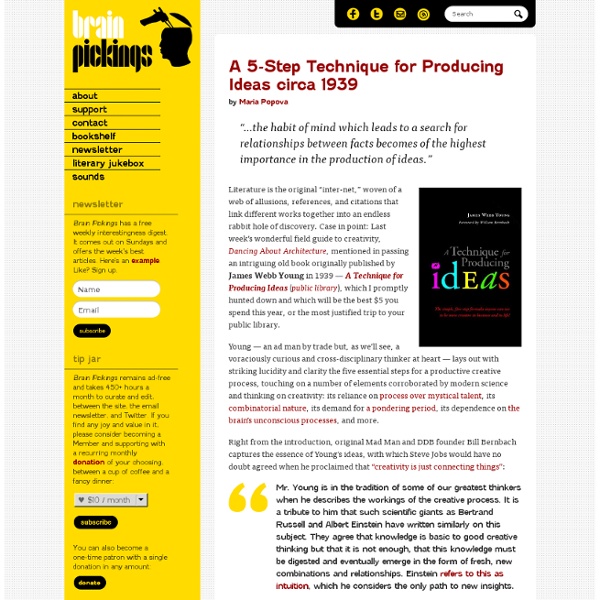 by Maria Popova “The habit of mind which leads to a search for relationships between facts becomes of the highest importance in the production of ideas.” Literature is the original “inter-net,” woven of a web of allusions, references, and citations that link different works together into an endless rabbit hole of discovery. Case in point: Last week’s wonderful field guide to creativity, Dancing About Architecture, mentioned in passing an intriguing old book originally published by James Webb Young in 1939 — A Technique for Producing Ideas (public library), which I promptly hunted down and which will be the best $5 you spend this year, or the most justified trip to your public library. Right from the introduction, original Mad Man and DDB founder Bill Bernbach captures the essence of Young’s ideas, with which Steve Jobs would have no doubt agreed when he proclaimed that “creativity is just connecting things”: Mr. In a chapter on training the mind, Young offers: Donating = Loving

Reinventing Discovery: The New Era of Networked Science Reinventing Discovery: The New Era of Networked Science is a book written by Michael Nielsen and released in October 2011. It argues for the benefits of applying the philosophy of open science to research. Summary[edit] The following is a list of major topics in the book's chapters. appendix - The problem solved by the Polymath Project An Antidote to the Age of Anxiety: Alan Watts on Happiness and How to Live with Presence by Maria Popova Wisdom on overcoming the greatest human frustration from the pioneer of Eastern philosophy in the West. “How we spend our days is, of course, how we spend our lives,” Annie Dillard wrote in her timeless reflection on presence over productivity — a timely antidote to the central anxiety of our productivity-obsessed age. Indeed, my own New Year’s resolution has been to stop measuring my days by degree of productivity and start experiencing them by degree of presence. But what, exactly, makes that possible?

Crush the "I'm Not Creative" Barrier - Jeff Dyer, Hal Gregersen, and Clayton M. Christensen by Jeff Dyer, Hal Gregersen, and Clayton M. Christensen | 10:50 AM May 7, 2012 Did you know that if you think you are creative, you’re more likely to actually be creative? This surprising fact pops up again and again in our research. In our database of over 6,000 professionals who have taken the Innovator’s DNA self & 360 assessments, people (entrepreneurs and managers alike) who “agree” with the survey statement “I am creative” consistently deliver disruptive solutions — by creating new businesses, products, services, and processes that no one has done before. They see themselves as creative and act that way.

Ray Bradbury on Writing, Emotion vs. Intelligence, and the Core of Creativity by Maria Popova “You can only go with loves in this life.” Between 1973 and 1974, journalist James Day hosted the short-lived but wonderful public television interview series Day at Night. Among his guests was the inimitable Ray Bradbury (August 22, 1920–June 5, 2012) — beloved writer, man of routine, tireless champion of space exploration, patron saint of public libraries, passionate proponent of doing what you love and writing with joy. Highlights from the interview, which has been kindly digitized by CUNY TV, are transcribed below. On the misunderstood, and often dismissed, value of the fantasy genre:

10 Rules for Creative Projects from Legendary Painter Richard Diebenkorn by Maria Popova “Do search. But in order to find other than what it searched for.” On a recent visit to the Richard Diebenkorn: The Berkeley Years, 1953-1966 exhibition at San Francisco’s De Young fine arts museum , I was taken with a small, simple sheet of paper handed to visitors, printed on which were the artists’ ten rules for beginning a painting — a sort of manifesto that applies in various degrees and various dimensions to just about every creative or intellectual endeavor, making a fine addition to these favorite manifestos for the creative life . Tackle Any Issue With a List of 100 The List of 100 is a powerful technique you can use to generate ideas, clarify your thoughts, uncover hidden problems or get solutions to any specific questions you’re interested in. The technique is very simple in principle: state your issue or question in the top of a blank sheet of paper and come up with a list of one hundred answers or solutions about it. “100 Ways to Generate Income”, “100 Ways to be More Creative” or “100 Ways to Improve my Relationships” are some examples. “One hundred entries? Isn’t that way too many?” Bear with me: it’s exactly this exaggeration that makes the technique powerful.

Kierkegaard on Anxiety & Creativity by Maria Popova “Because it is possible to create — creating one’s self, willing to be one’s self… — one has anxiety. One would have no anxiety if there were no possibility whatever.” “Anxiety is love’s greatest killer,” Anaïs Nin famously wrote. But what, exactly, is anxiety, that pervasive affliction the nature of which remains as drowning yet as elusive as the substance of a shadow? Beer: creative thinking's old best friend (Photo: Raina + Wilson) Ernest Hemingway was a notorious drunkard. He’s also considered one of the 20th century’s greatest writers. Pixar Cofounder Ed Catmull on Failure and Why Fostering a Fearless Culture Is the Key to Groundbreaking Creative Work by Maria Popova Why the greatest enemy of creative success is the attempt to fortify against failure. “Make New Mistakes. Make glorious, amazing mistakes. Make mistakes nobody’s ever made before,” Neil Gaiman urged in his commencement-address-turned-manifesto-for-the-creative life. “The chief trick to making good mistakes is not to hide them — especially not from yourself,” philosopher Daniel Dennett asserted in his magnificent meditation on the dignity and art-science of making mistakes.

18 Things Highly Creative People Do Differently This list has been expanded into the new book, “Wired to Create: Unravelling the Mysteries of the Creative Mind,” by Carolyn Gregoire and Scott Barry Kaufman. Creativity works in mysterious and often paradoxical ways. Creative thinking is a stable, defining characteristic in some personalities, but it may also change based on situation and context. Inspiration and ideas often arise seemingly out of nowhere and then fail to show up when we most need them, and creative thinking requires complex cognition yet is completely distinct from the thinking process. Creativity Quotes From Mycoted The quotations here fall into two main categories. The first category is from people who have had a very restricted vision, with hindsight their comments can be used as powerful examples of what can happen if you don't allow creative thoughts to flourish. The second category is from people who have had a much more creative, open view of life. "Computers in the future may weigh no more than 1.5 tons."

Mark McGuinness Mark Mark McGuinness I’m a poet, coach and creative entrepreneur, living in London, UK and coaching creatives worldwide via the magic of the internet. Why creativity? I’ve always loved creating. Ushering In the Creative Age - Chicago Policy Review Alan Freeman writes that the age of creation lies before us—if we can rediscover the lost art of investing in humans. Alan Freeman was the principal economist in the Greater London Authority’s Economic Analysis Unit from 2001 to 2011, and now writes and advises on cultural policy. While with the GLA’s intelligence unit, he produced a series of reports that defined the field of measuring the cultural and creative industry activity of large cities. These were Creativity: London’s Core Business, the first comprehensive study of London’s cultural and creative industries, five subsequent updates, and London: A Cultural Audit, a rigorous comparison of the cultural offer of London, Shanghai, Paris, New York and Tokyo. The ‘creative industries’, a term popularized by the 1997 British labor government, are a copywriters’ dream. They create wealth.