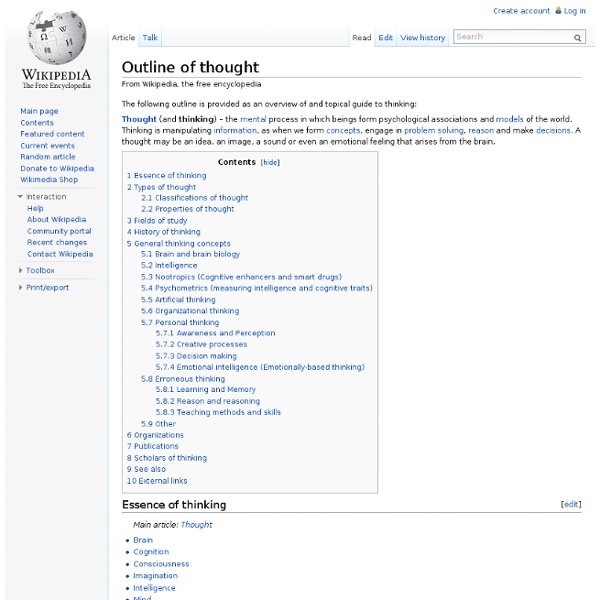 The Creative Thought Process - Part One | Event Experts One of the big parts of being an Event Designer is the creation of an event. By this I mean the ability to take what your client says to you and translate that into something amazing, dazzling, inspiring and ultimately something that represents what your client had in mind. I say that with tongue in cheek as most of our clients don’t actually know what they want and that is where you come in. So, as the designer how do you take your client’s mumblings and musings and turn them into a spectacular event. I have personally used two different software programs for this process and the first is Inspiration and the second is Mindjet. For the purposes of this exercise I have decided to use Mindjet as my brainstorming tool and given myself the task of coming up with a theme for the launch of a new perfume.

thinking skills There is no logic in connecting an office copier with 'nose'. That is to say, there is no 'logic' in our normal undertanding of logic. This understanding is based on passive surface information systems. There is, however, the logic of active surface information systems, and that is the logic of a patterning system. In such a system, the putting together of 'copier' with the random input 'nose' is perfectly logical. At the same time, the juxtaposition is a logic of action. JUXTAPOSITIONAs many readers will know, the random juxtaposition is one of the many tools of lateral thinking. • What has smell to do with a copier? Smell is a sensation. • What could smell be used for? When copiers run out of paper or toner, there is usually a light signal - perhaps a red light. SMELL SIGNALWhat about a 'smell signal'? There could be different smells for different things. MOVEMENTThe above example illustrates the process of 'movement', which can be practised until a skill is built up in this operation.

Making Good Lessons Great: Incorporating Multiple Iintelligences and Creative Thinking into Everyday Lesson Plans « clearings by Betty K. Wood and Andrew L. Hunt, University of Arkansas at Little Rock Sarah C. Wood-Jenkins, Ball State University I didn’t find anything very revolutionary here except this quote which I shall bear in mind (lay-out is mine): ‘One model for teaching the skill of creative thinking involves: fluency flexibility originalityelaboration‘ “The following linear representation of a problem-solving thought process, developed by Puccio, Murdock, and Mance (2005), provides an excellent example of how characteristics and behaviors of Critical Thinking and Creative Thinking operate.” Source: Like this: Like Loading...

How Creativity Connects with Immorality In the mid 1990’s, Apple Computers was a dying company. Microsoft’s Windows operating system was overwhelmingly favored by consumers, and Apple’s attempts to win back market share by improving the Macintosh operating system were unsuccessful. After several years of debilitating financial losses, the company chose to purchase a fledgling software company called NeXT. However, despite the widespread positive image of Jobs as a creative genius, he also has a dark reputation for encouraging censorship,“ losing sight of honesty and integrity”, belittling employees, and engaging in other morally questionable actions. In a recent paper published in the Journal of Personality and Social Psychology, researchers at Harvard and Duke Universities demonstrate that creativity can lead people to behave unethically. In one study, the authors administered a survey to employees at an advertising agency. These studies demonstrate that there is indeed a dark side to creativity.

Creative thinking with creative geniuses like you! A Little Weird? Prone to Depression? Blame Your Creative Brain Whenever you want to do something extraordinary, risky, or scary in your life (something that you know in your heart that you need to do, but it would really be more convenient to ignore it and just not do it), it’s essential to surround yourself with inspiring, encouraging, like-minded people. If they’re leaders in their own right who to a certain degree have done what you long to do, even better. I first met Gwyneth Leech last summer at my nephew’s first birthday party in Brooklyn (she’s my sister’s husband’s cousin). We were chatting idly until the moment she mentioned that she, a lifelong artist, had “accidentally” started creating art on used coffee cups, drawing to pass time in PTA meetings. I grabbed my notebook and pen and turned our chat into an interview (I know, this isn’t normal birthday party behavior, I do this frequently so you might not want to invite me to yours). “Gwyneth says you have to read this,” Martha told me. 1) “We cannot afford to waste human gifts. Dr.

Mad Genius, Eccentric Behavior & Creative Process Kristi Tencarre : Mad Genius Eccentric Creative Beings By Kristi Tencarre What is madness, except for non-conformity to the norm? Majority makes up the norm, therefore their definition of madness becomes the marker signaling the labeled to watch out for and stay away from. Madness has been officially defined as mentally unstable. One characteristic of success in any creative endeavor is to not conform to the norms, mores and expectations of society. Eccentric is a positive term used to describe creative madness, which can also be called creative genius. To be creative one must have a smidgen of rebellion in the soul. What would people say if you quit your job to stay at home and get creative? So what if people label us as "mad" because we are pursuing our heart's desire. © 2006 Kristi Tencarre Kristi Tencarre is a long-time and valued contributor to Creativity Portal, sharing her creative perspective and photo writing prompts with its readers.

The Inspiration Paradox: Your Best Creative Time Is Not When You Think A bus company in China has launched a new “safe driving” campaign by suspending bowls of water over their drivers. To avoid getting wet, drivers must drive gently. In today’s technology-obsessed world, this solution is elegantly primitive. Not so. Numerous studies have demonstrated that our best performance on challenging, attention-demanding tasks - like studying in the midst of distraction - occurs at our peak time of day. In a study I conducted, for example, participants were given three related cue words (e.g., SHIP OUTER CRAWL), and were required to find their common link (SPACE). But distraction is not all bad, and Wieth and Zacks have demonstrated that we can use our increased susceptibility to distraction at off-peak times to our advantage. Insight problems, on the other hand, often initially mislead the solver. Insight problems involve thinking outside the box. Other studies show similar results.

A Creative Buzz - Ideas Market By Christopher Shea People who like to write in cafes are onto something, it seems: A moderate level of noise—the equivalent of the background buzz of conversation — prompts more-creative thought, according to a study. Across several experiments involving more than 300 people, participants worked on a series of exercises demanding mental flexibility, including word-association games and practical problems. They brainstormed about how a mattress company might improve its product, for example, and devised as many uses as possible for a brick. They did their thinking while ambient noise recorded in a cafeteria, roadside, and at a construction site was played at three levels: softly, moderately, or loudly, with the moderate level being about what you’d hear in a bustling café: 70 decibels. (In one experiment there was a control group that heard “no” noise, but there was some ambient sound even in that case, making it very much like the low-noise condition.) Source: “Is Noise Always Bad?

Abstraction Abstraction is a process by which concepts are derived from the usage and classification of literal ("real" or "concrete") concepts, first principles, or other methods. "An abstraction" is the product of this process—a concept that acts as a super-categorical noun for all subordinate concepts, and connects any related concepts as a group, field, or category.[1] Abstractions may be formed by reducing the information content of a concept or an observable phenomenon, typically to retain only information which is relevant for a particular purpose. For example, abstracting a leather soccer ball to the more general idea of a ball retains only the information on general ball attributes and behavior, eliminating the other characteristics of that particular ball.[1] Origins[edit] Thinking in abstractions is considered[by whom?] Abstraction involves induction of ideas or the synthesis of particular facts into one general theory about something. Thought process[edit] Cat on Mat (picture 1)

Five glorious presentations on visual thinking Do you think in words or pictures, or both? Visual thinking engages the part of the brain that handles visual processing, and is said to be both "emotional and creative" so you can "organise information in an intuitive and simultaneous way". A picture really might be worth a thousand words, while being easier to understand and recall. Therefore it is worth exploring how visual thinking can help you communicate ideas to colleagues and clients. I have collated a few presentations to help you do exactly that. Visual Thinking By Chris Finlay. An Introduction to Visual Thinking By Ryan Coleman. The Value of Visual Thinking in Social Business By David Armano. The ten and a half commandments of visual thinking Via whatidiscover. Visual and Creative Thinking: What We Learned From Peter Pan and Willy Wonka By Kelsey Ruger. [Joyous visual thinking image by jonny goldstein via Flickr, various rights reserved]