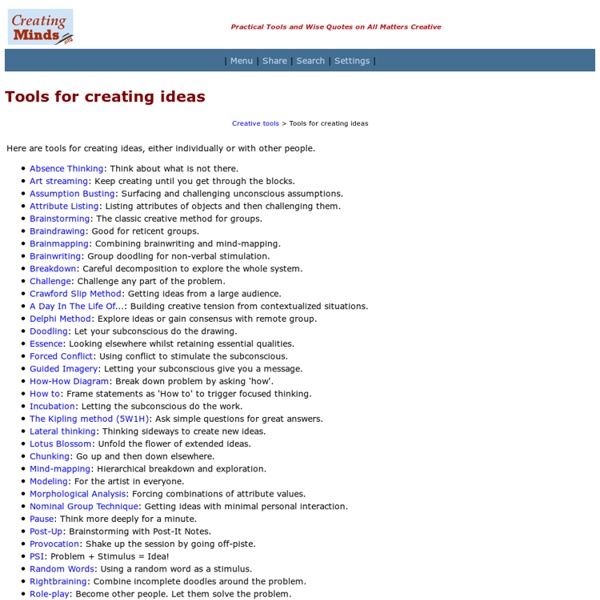 Inspiration Pad Pro v2.0 Inspiration Pad Pro v3.0"Endless Inspiration!" Inspiration Pad Pro is a program you can use to generate all sorts of things for your campaign. Generate names, town information, encounters, treasures - you name it! 10 Brilliant Social Psychology Studies Ten of the most influential social psychology experiments. “I have been primarily interested in how and why ordinary people do unusual things, things that seem alien to their natures.Why do good people sometimes act evil?Why do smart people sometimes do dumb or irrational things?” –Philip Zimbardo Human Potential Movement The Human Potential Movement (HPM) arose out of the milieu of the 1960s and formed around the concept of cultivating extraordinary potential that its advocates believed to lie largely untapped in all people. The movement took as its premise the belief that through the development of "human potential", humans can experience an exceptional quality of life filled with happiness, creativity, and fulfillment. As a corollary, those who begin to unleash this assumed potential often find themselves directing their actions within society towards assisting others to release their potential. Adherents believe that the net effect of individuals cultivating their potential will bring about positive social change at large. Roots[edit] The movement has its conceptual roots in existentialism and humanism.

10 Important Google URLs That Every Google User Should Know Which websites and apps have background access to my Google account? What does Google know about me? Where can I see all the ads that I’ve clicked on Google search? What does Google know about the places I’ve visited recently? Humanistic psychology Humanistic psychology is a psychological perspective which rose to prominence in the mid-20th century in response to the limitations of Sigmund Freud's psychoanalytic theory and B.F. Skinner's behaviorism.[1] With its roots running from Socrates through the Renaissance, this approach emphasizes individuals inherent drive towards self-actualization and creativity. It typically holds that people are inherently good. It adopts a holistic approach to human existence and pays special attention to such phenomena as creativity, free will, and human potential. It encourages viewing ourselves as a "whole person" greater than the sum of our parts and encourages self exploration rather than the study of behavior in other people.