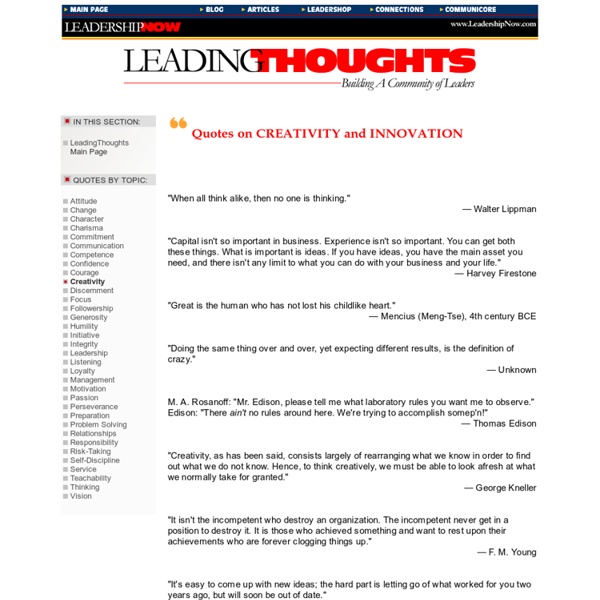 Thinking Methods: Creative Problem Solving They further divided the six stages into three phases, as follows: 1. Exploring the Challenge (Objective Finding, Fact Finding, and Problem Finding), Generating Ideas (Idea Finding), and Preparing for Action (Solution Finding and Acceptance Finding). Description: Since the arrival of the now classical Osborn-Parnes structure, any number of academic and business entities have re-sorted and renamed the stages and phases of what we now call the Creative Problem Solving Process (CPS). However, the originators' fundamental approach remains in tact. Learn How to Think Different(ly) - Jeff Dyer and Hal Gregersen by Jeff Dyer and Hal Gregersen | 10:24 AM September 27, 2011 In the Economist review of our book, The Innovator’s DNA, the reviewer wondered whether genius-level innovators such as Marc Benioff, Jeff Bezos, and Steve Jobs challenge the idea that working adults can really learn how to think differently and become innovators. We don’t think so.

Realistic Lateral Thinking Puzzles Lateral Thinking Puzzles, unlike most puzzles, are inexact. In a sense, they are a hybrid between puzzles and storytelling. In each puzzle, some clues to a scenario are given, but the clues don't tell the full story. Your job is to fill in the details and complete the story. Obviously, there is usually more than one answer to any given puzzle, but, in general, only one solution is truly satisfying.

How Great Entrepreneurs Think What distinguishes great entrepreneurs? Discussions of entrepreneurial psychology typically focus on creativity, tolerance for risk, and the desire for achievement—enviable traits that, unfortunately, are not very teachable. So Saras Sarasvathy, a professor at the University of Virginia's Darden School of Business, set out to determine how expert entrepreneurs think, with the goal of transferring that knowledge to aspiring founders. While still a graduate student at Carnegie Mellon, Sarasvathy—with the guidance of her thesis supervisor, the Nobel laureate Herbert Simon—embarked on an audacious project: to eavesdrop on the thinking of the country's most successful entrepreneurs as they grappled with business problems. She required that her subjects have at least 15 years of entrepreneurial experience, have started multiple companies—both successes and failures—and have taken at least one company public. Do the doable, then push it

Brain is not fully mature until 30s and 40s (PhysOrg.com) -- New research from the UK shows the brain continues to develop after childhood and puberty, and is not fully developed until people are well into their 30s and 40s. The findings contradict current theories that the brain matures much earlier. Professor Sarah-Jayne Blakemore, a neuroscientist with the Institute of Cognitive Neuroscience at University College London, said until around a decade ago many scientists had "pretty much assumed that the human brain stopped developing in early childhood," but recent research has found that many regions of the brain continue to develop for a long time afterwards.

Women's exercise linked to lower cognitive skill - health - 07 January 2011 WOMEN who habitually take strenuous exercise might be at risk of damaging their cognitive function later in life. Strenuous exercise is known to reduce oestrogen levels in women and girls. This can delay the start of menstruation, and can lead to irregular periods in adult women. Religion May Cause Brain Atrophy Faith can open your mind but it can also cause your brain to shrink at a different rate, research suggests. Researchers at Duke University Medical Centre in the US claim to have discovered a correlation between religious practices and changes in the brains of older adults. The study, published in the open-access science journal, Public Library of Science ONE, asked 268 people aged 58 to 84 about their religious group, spiritual practices and life-changing religious experiences. Changes in the volume of their hippocampus, the region of the brain associated with learning and memory, were tracked using MRI scans, over two to eight years. Protestants who did not identify themselves as born-again were found to have less atrophy in the hippocampus region than did born-again Protestants, Catholics or those with no religious affiliation. Although the brain tends to shrink with age, atrophy in the hippocampus has been linked with depression and Alzheimer's disease.

Time on the Brain: How You Are Always Living In the Past, and Other Quirks of Perception I always knew we humans have a rather tenuous grip on the concept of time, but I never realized quite how tenuous it was until a couple of weeks ago, when I attended a conference on the nature of time organized by the Foundational Questions Institute. This meeting, even more than FQXi’s previous efforts, was a mashup of different disciplines: fundamental physics, philosophy, neuroscience, complexity theory. Crossing academic disciplines may be overrated, as physicist-blogger Sabine Hossenfelder has pointed out, but it sure is fun. Like Sabine, I spend my days thinking about planets, dark matter, black holes—they have become mundane to me. But brains—now there’s something exotic. So I sat rapt during the neuroscientists’ talks as they described how our minds perceive the past, present, and future.

This Is Your Brain On Caffeine Ever miss your daily cup of coffee and subsequently get a pounding headache? According to reports from consumers of coffee and other caffeinated products, caffeine withdrawal is often characterized by a headache, fatigue, feeling less alert, less energetic and experiencing difficulty concentrating. Caffeine withdrawal is at its worst between 24 to 48 hours and lasts up to a week. Researchers from the University of Vermont College of Medicine and Johns Hopkins School of Medicine sought to investigate the biological mechanisms of caffeine withdrawal in a paper published recently in the online edition of the scientific journal Psychopharmacology.

Why do You Turn Down the Radio When You’re Lost? You’re dri­ving through sub­ur­bia one evening look­ing for the street where you’re sup­posed to have din­ner at a friend’s new house. You slow down to a crawl, turn down the radio, stop talk­ing, and stare at every sign. Why is that? Nei­ther the radio nor talk­ing affects your vision. Or do they? How can I improve my short term memory? Q: How can I improve my mem­ory? Is there a daily exer­cise I can do to improve it? A: The most impor­tant com­po­nent of mem­ory is atten­tion. Brain Fitness Program and Neuroplasticity Update (11/10/10): Have you seen PBS great spe­cials on Brain Fit­ness and Neu­ro­plas­tic­ity ? The Brain Fit­ness Pro­gram DVD ($24.95) “The Brain Fit­ness Pro­gram is based on the brain’s abil­ity to change and adapt, even rewire itself. In the past two years, a team of sci­en­tists has devel­oped computer-based stim­u­lus sets that drive ben­e­fi­cial chem­i­cal, phys­i­cal and func­tional changes in the brain. Dr.

Sleep, Tetris, Memory and the Brain As part of our ongo­ing Author Speaks Series, we are hon­ored to present today this excel­lent arti­cle by Dr. Shan­non Mof­fett, based on her illu­mi­nat­ing and engag­ing book. Enjoy! (and please go to sleep soon if you are read­ing this late Mon­day night)