The Blog : Drugs and the Meaning of Life 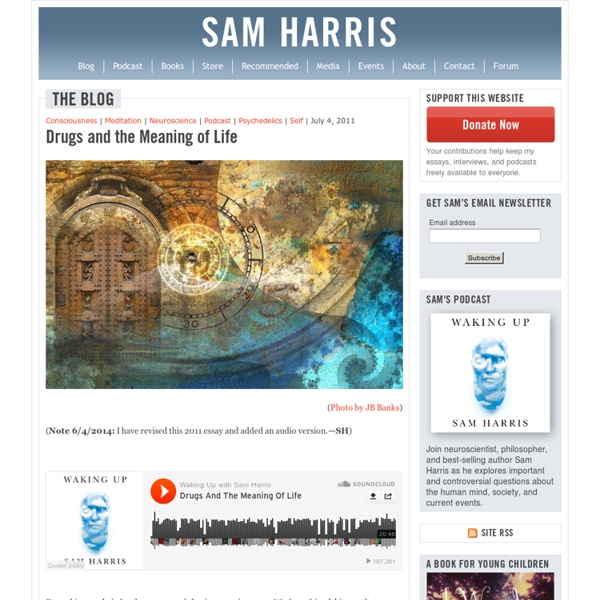 (Photo by JB Banks) (Note 6/4/2014: I have revised this 2011 essay and added an audio version.—SH) Everything we do is for the purpose of altering consciousness. We form friendships so that we can feel certain emotions, like love, and avoid others, like loneliness. We eat specific foods to enjoy their fleeting presence on our tongues. Drugs are another means toward this end. One of the great responsibilities we have as a society is to educate ourselves, along with the next generation, about which substances are worth ingesting and for what purpose and which are not. However, we should not be too quick to feel nostalgia for the counterculture of the 1960s. Drug abuse and addiction are real problems, of course, the remedy for which is education and medical treatment, not incarceration. I discuss issues of drug policy in some detail in my first book, The End of Faith, and my thinking on the subject has not changed. I have two daughters who will one day take drugs. (Pokhara, Nepal) Ott, J.

How to Master the Art of Living By Leo Babauta Imagine you had a gorgeous blueberry sitting on the otherwise empty plate in front of you. You pick it up gently, place it on your tongue, and begin to taste it. You already know how a blueberry tastes, and so when this one is a bit riper than you’d like, you make a face, feel the disappointment, swallow it with displeasure. 5 Steps to Transform Yourself into Higher Self The last week or so I have been engulfed and suffocating in negativity. Everywhere I look these days information is streaming in; all about death, war, pestilence, toxins, destruction, disease..well you get it. It all felt so much out of my control and dis-empowering. Psychoactive Vaults : "The Psychedelics and Religion" by Walter Houston Clark This document in other languages: Hungarian - Daath.hu Introduction In 1968 Ralph Metzner wrote of Walter Houston Clark, (in The Ecstatic Adventure)

Hallucinatory Near-Death Experiences Computer simulation of a recurring lattice tunnel hallucination, or form constant, generated using retino- cortical mapping. Image inverted for effect. Reprinted with the permission of Paul C. Bressloff. Even if we disregard the overwhelming evidence for the dependence of consciousness on the brain, there remains strong evidence from reports of near-death experiences themselves that NDEs are not glimpses of an afterlife. This evidence includes: Terence McKenna Land media/McKenna streaming audio and video Rupert Sheldrake hosts many excellent realaudio streams including Trialogues at the Edge of the MilleniumPart I and Part II led by Terence (1.5 hours each) The Trip Receptacles : MP3 clips from all-psychedelic, all-entheogen radio, transmitted via KPFA in Berkeley with Stanislav Grof, Alexander (Sasha) Shulgin, Timothy Leary, Terence McKenna, Albert Hoffman, Rick Strassman, Fritjof Capra, Andrew Weil, D.M. Turner and many others.

10 Questions: On Finding Your ‘Soul-Life’ in a 130-Year-Old Book Brooke Williams and Terry Tempest Williams are two of our generation’s greatest gifts. Brooke is the author of four books, and he offers deep meditations on wilderness and wild lands, as well as working actively in defense of the pristine, most recently with the Southern Utah Wilderness Alliance. Terry is legendary for her intensely personal explorations of nature and life and the human resonance between the two, and she’s the author of the critically acclaimed Refuge: An Unnatural History of Family and Place and numerous other books. The couple, who divide their time between Castle Valley, Utah, and Jackson, Wyoming, were in a book shop in Maine when Terry stumbled across a volume called The Story of My Heart. Recently, I caught up with the two to learn more about how and why The Story of My Heart got under their skin, and what lessons it has for us today.

Mathew Charles Lamb Mathew Charles "Matt" Lamb (5 January 1948 – 7 November 1976) was a Canadian spree killer who, in 1967, avoided Canada's then-mandatory death penalty for capital murder by being found not guilty by reason of insanity. Abandoned by his teenage mother soon after his birth in Windsor, Ontario, Lamb suffered an abusive upbringing at the hands of his step-grandfather, leading him to become emotionally detached from his relatives and peers. He developed violent tendencies, which manifested themselves in his physical assault of a police officer at the age of 16 in February 1964, and his engaging in a brief shoot-out with law enforcement ten months later. After this latter incident he spent 14 months, starting in April 1965, at Kingston Penitentiary, a maximum security prison in eastern Ontario. Lamb continued to show improvement, becoming a productive labourer on Barker's farm and earning the trust of the doctor's family. Early life[edit]

Free-radical theory of aging Strictly speaking, the free radical theory is only concerned with free radicals such as superoxide ( O2- ), but it has since been expanded to encompass oxidative damage from other reactive oxygen species such as hydrogen peroxide (H2O2), or peroxynitrite (OONO-).[4] Denham Harman first proposed the free radical theory of aging in the 1950s,[5] and in the 1970s extended the idea to implicate mitochondrial production of reactive oxygen species.[6] In some model organisms, such as yeast and Drosophila, there is evidence that reducing oxidative damage can extend lifespan.[7] In mice, interventions that enhance oxidative damage generally shorten lifespan.[8] However, in roundworms (Caenorhabditis elegans), blocking the production of the naturally occurring antioxidant superoxide dismutase has recently been shown to increase lifespan.[9] Whether reducing oxidative damage below normal levels is sufficient to extend lifespan remains an open and controversial question. Background[edit] [edit]