Contrasting and categorization of emotions 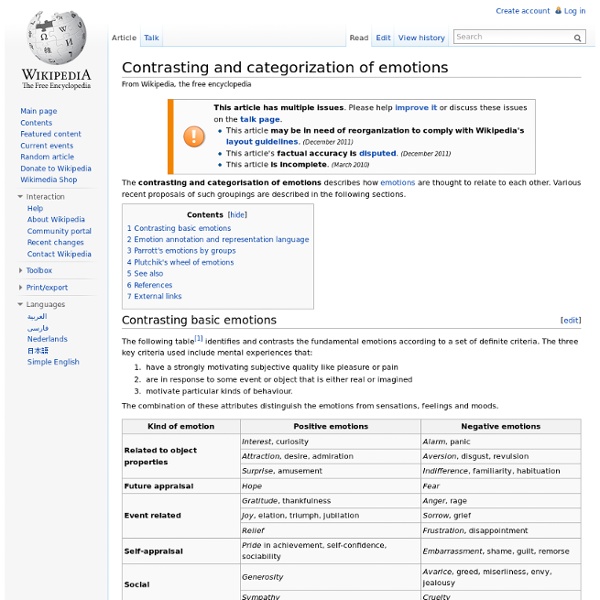 The contrasting and categorisation of emotions describes how emotions are thought to relate to each other. Various recent proposals of such groupings are described in the following sections. Contrasting Basic Emotions[edit] The following table,[1] based on a wide review of current theories, identifies and contrasts the fundamental emotions according to a set of definite criteria. The three key criteria used include: 1) mental experiences that have a strongly motivating subjective quality like pleasure or pain; 2) mental experiences that are in response to some event or object that is either real or imagined; 3) mental experiences that motivate particular kinds of behaviour. The combination of these attributes distinguish the emotions from sensations, feelings and moods. HUMAINE's proposal for EARL (Emotion Annotation and Representation Language)[edit] Parrott's emotions by groups[edit] A tree-structured list of emotions was described in Parrott (2001).[3][unreliable source?] See also[edit]

How did life originate? How did life originate? Living things (even ancient organisms like bacteria) are enormously complex. However, all this complexity did not leap fully-formed from the primordial soup. Instead life almost certainly originated in a series of small steps, each building upon the complexity that evolved previously: Simple organic molecules were formed. Simple organic molecules, similar to the nucleotide shown below, are the building blocks of life and must have been involved in its origin.

wait but why: Putting Time In Perspective Humans are good at a lot of things, but putting time in perspective is not one of them. It’s not our fault—the spans of time in human history, and even more so in natural history, are so vast compared to the span of our life and recent history that it’s almost impossible to get a handle on it. If the Earth formed at midnight and the present moment is the next midnight, 24 hours later, modern humans have been around since 11:59:59pm—1 second. Countries With The Most Brainpower Which country has the largest stock of brilliant people? The answer to this question depends in part on raw brainpower, but also on the size of a country. Exclusively for Business Insider, Dr. Jonathan Wai, a Duke University Talent Identification Program research scientist and psychologist, compiled a new ranking of countries based on scores on the 2009 PISA assessment, which tests reading, math, and science competency in 15-year-olds. Multiple researchers have found that these tests, administered by the Organization for Economic Cooperation and Development (OECD), are a good measure of "g," or general intelligence. In our list, the rank order is based on two things.

Plutchik-wheel.svg - Wikipedia, the free encyclopedia Cancel Edit Delete Preview revert Text of the note (may include Wiki markup) Could not save your note (edit conflict or other problem). Please copy the text in the edit box below and insert it manually by editing this page. Critical thinking web We have over 100 online tutorials on different aspects of thinking skills. They are organized into modules listed below and in the menu above. Our tutorials are used by universities, community colleges, and high schools around the world. The tutorials are completely free and under a Creative Commons license. More info Maintained by Joe Lau, Philosophy Department, University of Hong Kong.

60 Small Ways to Improve Your Life in the Next 100 Days Contrary to popular belief, you don’t have to make drastic changes in order to notice an improvement in the quality of your life. At the same time, you don’t need to wait a long time in order to see the measurable results that come from taking positive action. All you have to do is take small steps, and take them consistently, for a period of 100 days. Below you’ll find 60 small ways to improve all areas of your life in the next 100 days. Home

10 Mind-Blowing Theories That Will Change Your Perception Of The World by Anna LeMind Reality is not as obvious and simple as we like to think. Some of the things that we accept as true at face value are notoriously wrong. Scientists and philosophers have made every effort to change our common perceptions of it. The 10 examples below will show you what I mean. II - Home Return to MERLOT II Home Page Search all MERLOT Select to go to your profile Click to expand login or register menu Select to go to your workspace Is being happy simply a matter of habit? Gertrude Stein had a routine of driving into the French countryside with her beloved partner to view cows. The American writer, poet and art collector needed to gaze upon one – the right kind of one, reportedly – in order to feel calm and happy. She would get out of the car, set up a camp stool, paper and pencil in hand, hoping for inspiration to write, while Alice Toklas took a switch to a cow to coax her into the author’s line of vision. If the cow didn’t suit Ms. Stein’s mood, off they would go in search of one that did. (Apparently, she had a thing about looking at rocks, too.)

The effect of Music on Plants (The Plant Experiments) About Positive Music by Don Robertson The Plant Experiments In 1973, a woman named Dorothy Retallack published a small book called The Sound of Music and Plants. Her book detailed experiments that she had been conducting at the Colorado Woman’s College in Denver using the school’s three Biotronic Control Chambers. Mrs.