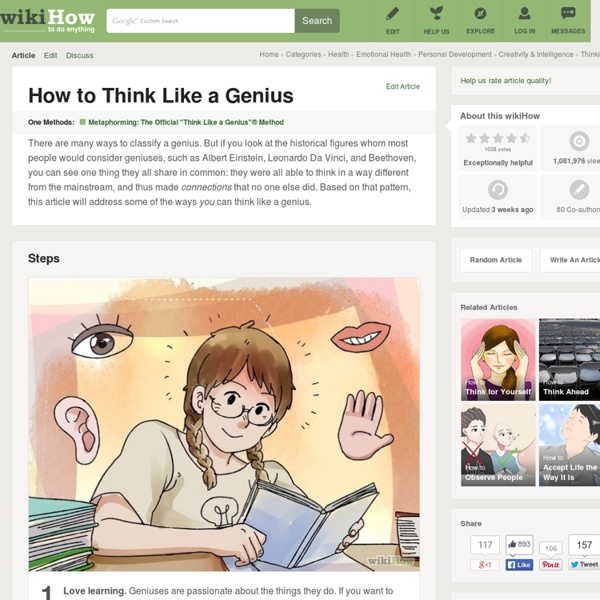 What Is Intelligence, Anyway? What Is Intelligence, Anyway? By Isaac Asimov What is intelligence, anyway? When I was in the army, I received the kind of aptitude test that all soldiers took and, against a normal of 100, scored 160. The 8 Most Unexpected Advantages of Anxiety Anxiety can be crippling, but psychology studies find it does have some unexpected upsides. Anxiety can be crippling, but sometimes it is a crucial part of getting the best out of yourself. Artists, comedians, athletes and other performers often talk about the right amount of anxiety and how it can improve creativity and performance. But anxiety also has a number of lesser known upsides… 1. People will trust you more

Technologies of Qi – Energy Flows Where Attention Goes Can we direct Qi (or Chi) into our bodies using the power of imagination? The ancient practitioners of Tai Chi and Qigong definitely thought so. They taught that the flow of Qi energy is directe d by the mind, and it is through our imagination, that Qi is first felt, then reinforced.

Identify a Lie with 6 Simple Questions post written by: Marc Chernoff Email We all fall victim to at least a few lies during the course of our lifetime. Some lies may be extremely troublesome to our personal wellbeing, while other “white lies” may be far more innocuous. Either way, a lie is meant to deceive. So how can we avoid falling victim to a lie in the future? 7 Lessons From 7 Great Minds Have you ever wished you could go back in time and have a conversation with one of the greatest minds in history? Well, you can’t sorry, they’re dead. Unless of course you’re clairaudient, be my guest. But for the rest of us, we can still refer to the words they left behind. Even though these great teachers have passed on, their words still live, and in them their wisdom. How to Develop Your Visualization Skill This is an article by guest writer Albert Foong of UrbanMonk.Net. Think about this: everything we do begin as a thought. Every action, every word, every human creation exists first in our imagination. The ability to see things before they actually happen is what enables us to pursue our dreams and ultimately achieve them. In fact, the better we visualize the future we want, the better our chances to make it happen.

4 Surprising Advantages of Being Depressed Why being depressed can sometimes be necessary, even beneficial. Depression can be an adaptive way of dealing with certain problems in life, such as relationship breakdown and illness, say the authors of a new study. While clinical depression is a serious mental health issue, the researchers argue that by examining how depression might have originally arisen, we can better understand how to treat it. Dr. Yoga & Magical Thinking: A Defense Lets face it, when it comes to magical thinking, yoga people are some of the worst perpetrators around. Author and yogi Matthew Remski is right on the money when he observes “the facebook status updates that define yoga culture can be summed in one line. As I think so I shall be”. And while this idea is often attributed to no greater mind than the Buddha – we’ve got to get a grip. Wishing for something does not make it so.

15 styles of Distorted Thinking 15 styles of Distorted Thinking Filtering: You take the negative details and magnify them while filtering out all positive aspects of a situation. Polarized Thinking: Things are black or white, good or bad. You have to be perfect or you're a failure. There is no middle ground. Javascript For Designers: Getting on Your Feet Fast Aug 04 2009 Web designers are a special breed – we’re one of a small group of professionals that actively seeks out to improve ourselves and our craft through any means possible. This generally means on our own, from each other, and through an awful lot of ‘guess, test and revise.’ Web design isn’t for the faint of heart or those with any fear of failure. What is Mind Mapping? (and How to Get Started Immediately) A mind map is a graphical way to represent ideas and concepts. It is a visual thinking tool that helps structuring information, helping you to better analyze, comprehend, synthesize, recall and generate new ideas. Just as in every great idea, its power lies in its simplicity. In a mind map, as opposed to traditional note taking or a linear text, information is structured in a way that resembles much more closely how your brain actually works.

How To Turn Character Flaws Into Strengths With One Easy Mental Trick An easy mental trick to turn poor personality traits to your advantage. Believing that a negative personality trait has a positive ‘silver lining’ is enough to boost performance in that area, a new study finds. For example, a person who is very pessimistic might believe that one positive side of this ‘negative’ personality trait is that it makes them more realistic. The study, published in the Journal of Experimental Social Psychology, found that those who mentally endorsed the idea that being impulsive was linked to greater creativity, were actually more creative on a subsequent test (Wesnousky et al., 2014).

Related:  positive psychology • Thinking • psychology
Related:  Learn   -  thinkin   -  Brain Power   -  Intelligence/Development/Brain Power   -  Understanding Human Behavior   -  Tools for Cleverness   -  Think!   -  martyroddy   -  50 Ways To Boost Your Brain Power | 4 Mind 4 Life: Mental Health Tips   -  5 Creepy Forms of Mind Control You're Exposed to Daily | Cracked.com   -  Cognitive Behavioural Therapy (CBT) Worksheets, Handouts, Resources and Techniques | Psychology Tools   -  Staples eReader interactive infographic.   -  Problem loading page   -  Welcome to Life: the singularity, ruined by lawyers - YouTube   -  An Error Occurred Setting Your User Cookie   -  CCIwp2011-04.pdf   -  12 Rules for Being a Human Being   -  The Cheapest Generation   -  How Consciousness Evolved and Why a Planetary “Übermind” Is Inevitable | Brain Pickings   -  How to Rewire Your Brain to Be More Kind Toward Others   -  The Science of Procrastination and How to Manage It, Animated | Brain Pickings   -  Amy Cuddy: Your body language shapes who you are - YouTube   -  Sacred Geometry International - The World Is Our Classroom   -  BQO | Big Questions Online   -  Noam Chomsky on Where Artificial Intelligence Went Wrong   -  The Science of “Intuition” | Brain Pickings   -  COLLECTIVE INTELLIGENCE | Edge.org   -  How To Design a Lucky Life   -  Do we live in a computer simulation? UW researchers say idea can be tested   -  What Are Your Values? - Decision-Making Skills from MindTools.com   -  PsyBlog’s 10 Most Popular Psychological Insights From 2012 — PsyBlog   -  Trickmousing - YouTube   -  Artificial Intelligence @ MIRI   -  Machine Intelligence Research Institute - Wikipedia, the free encyclopedia   -  How to Identify Your Passions   -  Apps for Multiple Intelligences   -  Why Focus Makes Us Smarter--and 8 Ways to Sharpen Yours | Big Think   -  A Scientific Guide to Saying "No": How to Avoid Temptation and Distraction - The Buffer Blog   -  Lawrence Lessig: We the People, and the Republic we must reclaim | Video on TED.com   -  Data Science of the Facebook World—Stephen Wolfram Blog   -  Michel Bauwens: Four Scenarios for the Collaborative Economy - YouTube   -  Log into your edX Account | edX   -  Money on the Mind - YouTube