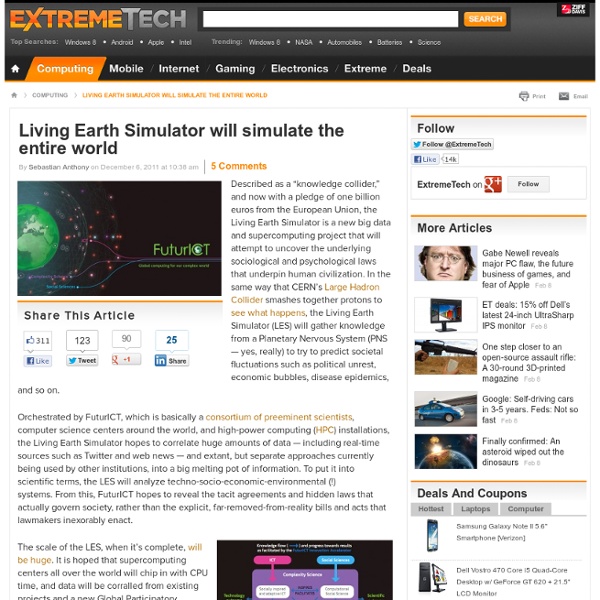 Described as a “knowledge collider,” and now with a pledge of one billion euros from the European Union, the Living Earth Simulator is a new big data and supercomputing project that will attempt to uncover the underlying sociological and psychological laws that underpin human civilization. In the same way that CERN’s Large Hadron Collider smashes together protons to see what happens, the Living Earth Simulator (LES) will gather knowledge from a Planetary Nervous System (PNS — yes, really) to try to predict societal fluctuations such as political unrest, economic bubbles, disease epidemics, and so on. The scale of the LES, when it’s complete, will be huge. The timing of EU’s billion-euro grant is telling, too. Looking at the larger picture, the Living Earth Simulator is really an admission that we know more about the physical universe than the social. Read more at FuturICT Related:  Visual Understanding Environment

gource - software version control visualization Gource is a software version control visualization tool. See more of Gource in action on the Videos page. Introduction Software projects are displayed by Gource as an animated tree with the root directory of the project at its centre. Currently Gource includes built-in log generation support for Git, Mercurial, Bazaar and SVN (as of 0.29). Synopsis view the log of the repository (Git, SVN, Mercurial and Bazaar) in the current path: gource Donations If you like Gource and would like to show your appreciation and encourage future work on this and other open source projects by the author, please consider making a donation! Bitcoin: 15WP34zkaZFJCyzCAKLt9qrWSvDuBN7XLv Related Software You may also want to check out Logstalgia, a web server access log visualization tool. News 14 April 2014 Gource 0.41 has been released. You can now specify a date range directly with --start-date and --stop-date (using 'YYYY-MM-DD hh:mm:ss' ISO format). Changes since 0.40: Multi-monitor support using SDL 2.0 when available.

Life Mirrors Art Mirrors Life - Skyrail Social Network Visualisation On my travels last week I came across this seriously cool new social network visualisation system called Skyrails. What I find particularly exciting about it is that the output looks like something out of the pages of Masamune Shirow’s “Ghost in the Shell” flying through the virtual noosphere. Whilst the utility of such visualisations are still questionable it’s always good to see innovation in this area and makes my own attempts look tame in comparison! “Noosphere (aka metaconsciousness): Human communication and interaction may eventually advance to the stage where even conscious thought may be globalized and massively shared. This will lead to the rise of the so-called noosphere.” Life mirroring art or art mirroring life?

Visual Map Of The Internet And Websites' Connectedness This is actually a worthwhile little time waster. Internet-map.net is a website that depicts websites as different sized circles based on the size of their audience, and their relatedness to one another based on their proximity on the map. It has a handy search feature too, so you don't have to go scrolling around to find the site you're looking for. Because otherwise it would be complete shit. Mathematically speaking, the Internet is a two-dimensional map display of links between sites on the Internet. I searched around looking at some of my favorite sites, and it was pretty neat to see what they were bunched with. Thanks to The Baron, who told me yesterday he'll get tired of reading Reddit, close the window, then open a new one and go to Reddit again.

The Internet map Marko A. Rodriguez CIRCOS Circular Data Visualization The Facts and Figures about the Power of Visual Content - Infographic We all know that images are compelling. The growth of visual content has been on a rapid upward trajectory over the last 12 months. Social media platforms such as Pinterest and Instagram have taken the social media world by storm. Instagram announced in July that it had acquired 80 million users. Compete.com recently released a report showing that Instagram was the fastest growing web property on the planet amongst the top 50 websites. Simply Measured looked at Facebook’s top 10 brand pages to find out the real numbers and facts and figures on the engagement and sharing levels of photos and videos in comparison to text and discovered: Videos are shared 1,200 percent more than links and text posts combinedPhotos are liked 200% more than text updates To put some perspective on the power of visual content other studies show that Photo and video posts on Pinterest are referring more traffic than Twitter, Stumbleupon, LinkedIn and Google+. It is now available on Amazon. Image by Big Stock Photo

Visual Sampler and Trends Talk | browsearth Hello again, as the off-duty excuse of boreal summer fades out...we have some little news! Key visual elements of the platform interface are in the works, and a few taster versions are included above. Once the set is fairly stable, we will be releasing them as a creative commons kit to spread around. Just noticed that a very similar technical effort is underway at Mozilla for distributed qualitative characterisation of personal profiles in terms of various merit award and credentialing: particularly On the Open Badge Infrastructure front, the goal is for this to be completely open and accessible to anyone who wants to be an issuer (push badges in) or a displayer/consumer (pull badges out). Onefeat takes elements from the hottest online trends today – gamification, photo sharing and social media – but takes it off the screen and into the real world.