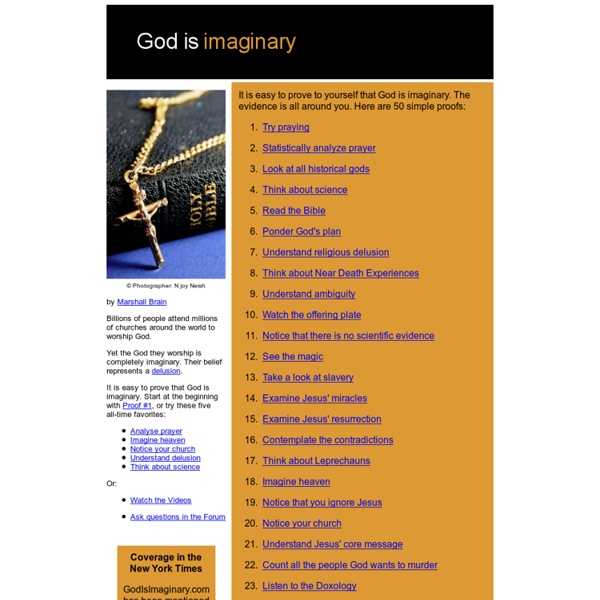 Religious Experiences Shrink Part of the Brain: Scientific American The article, “Religious factors and hippocampal atrophy in late life,” by Amy Owen and colleagues at Duke University represents an important advance in our growing understanding of the relationship between the brain and religion. The study, published March 30 in PLoS One, showed greater atrophy in the hippocampus in individuals who identify with specific religious groups as well as those with no religious affiliation. It is a surprising result, given that many prior studies have shown religion to have potentially beneficial effects on brain function, anxiety, and depression. A number of studies have evaluated the acute effects of religious practices, such as meditation and prayer, on the human brain. A smaller number of studies have evaluated the longer term effects of religion on the brain.

Debating a Christian – The Atheist Handbook Email by Jeremy L. Moran, JT Eberhard, Adam Brown, and other contributors Part 1. Why Atheism? Just about everyone is an atheist when it comes to other gods — the gods that other people believe in or that nobody believes in anymore. I’m an atheist about all gods because there's no reliable evidence for any god, or even for Jesus. There is also extensive evidence that Jesus and all gods are fictional characters — myths created mainly by people who had little understanding of how our universe operates. Jean Meslier Jean Meslier Jean Meslier (French: [melje]; also Mellier; 15 June 1664[1] – 17 June 1729), was a French Catholic priest (abbé) who was discovered, upon his death, to have written a book-length philosophical essay promoting atheism. Described by the author as his "testament" to his parishioners, the text denounces all religion. Life[edit]

Azeusism has caused every major atrocity in modern history! It happens far too frequently -- the lame atheism has caused more atrocities/death than Christianity/Islam/whatever argument. This means that a compelling response has not been found. If you are talking to a Christian who makes that argument, consider making the following argument. FreethoughtPedia.com From FreeThoughtPedia Overview Here we endeavor to organize a list of common theist arguments. “Can’t You Atheists Keep Your Opinions To Yourselves?”—No I Cannot. Reasons Why I am Vocal about my Atheism The other day I received an email asking me why I am so vocal in my atheist and general anti-religion commentary. It was a well meant email, in that it was not full of hate speech, religious rage, etc. It concluded with the question, “From now on, why can’t we just keep our religious opinions to ourselves?”

Famous Dead Nontheists A list of famous dead people who have rejected God and religion. These are people throughout history who have advocated living life without deference to a transcendent power. The list is in order of birth date. The purposes of this list are to combat the pervasive myth that atheists are terrible, immoral people and to convince the undecided that it is OK to be an atheist. Just like any other large group of people, some of these people lived exemplary lives and others did not.