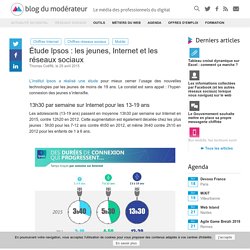 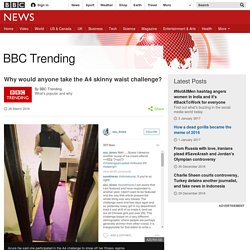 But what do some of the women who participated in the trend say - why did they take part? It's been criticised as irresponsible and potentially unhealthy. The latest craze from China involves mostly women holding up sheets of paper and taking selfies - they "win" if the paper entirely obscures their waist. It's called the "A4 challenge" after the standard paper size that's just 21cm (8.3in) across. Critics - and there were many online - say the challenge, like other similar trends before it, could promote eating disorders and body shaming: Image copyright @heyrandomgirl. Fla. teen on life support after Facebook 'Fire Challenge'

A Florida teenager is on life support after being set ablaze for a troubling social media stunt known as the "fire challenge. 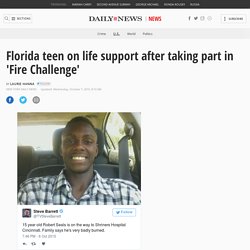 " Robert Seals, 15, was rushed to the hospital on Monday night after being doused in a flammable liquid and set on fire by a friend who held a match to his clothes. Seals' aunt, Lisa Oliphant,told the Orlando Sentinel"My nephew was hollering, 'I'm on fire! Fire Challenge. About Fire Challenge is a dare game in which the participant voluntarily sets oneself on fire for a short period of time by applying flammable liquids or igniting combustible parts of one’s body and filming the outcome, similar to other pain endurance challenges that have spread through the social media, such as the Eraser Challenge and the Hot Pepper Challenge. 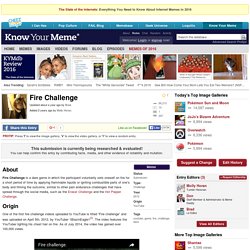 Origin One of the first fire challenge videos uploaded to YouTube is titled “Fire challenge” and was uploaded on April 5th, 2012, by YouTuber 1BlazinEagle1. The video features the YouTuber lighting his chest hair on fire. As of July 2014, the video has gained over 100,000 views. Spread On April 7th, 2013, Viner RolandConstantino introduced the hashtag #FireChallenge to accompany Vines that involve bringing a flame in contact (or near contact) with your body. Media coverage of the challenge increased in late July of 2014, after satirical news site News Nerd published an article on a fictional death due to the game on July 24th. Fire Challenge : le nouveau défi stupide fait ses premiers brûlés. What Is the Belly Button Challenge? Something Bad? Yes. A hotly contested, supposedly ancient manuscript suggests Christ was married.

But believing its origin story—a real-life Da Vinci Code, involving a Harvard professor, a onetime Florida pornographer, and an escape from East Germany—requires a big leap of faith. On a humid afternoon this past November, I pulled off Interstate 75 into a stretch of Florida pine forest tangled with runaway vines. My GPS was homing in on the house of a man I thought might hold the master key to one of the strangest scholarly mysteries in recent decades: a 1,300-year-old scrap of papyrus that bore the phrase “Jesus said to them, My wife.” The fragment, written in the ancient language of Coptic, had set off shock waves when an eminent Harvard historian of early Christianity, Karen L. King, presented it in September 2012 at a conference in Rome. Never before had an ancient manuscript alluded to Jesus’s being married. Le challenge du nombril est le nouveau thigh gap (et il est tout aussi débile) 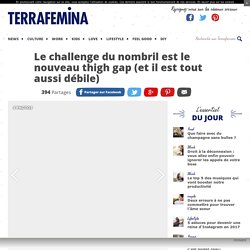 So What IS Neknominate? The Crazy New 'Australian' Drinking Game Taking Britain By Storm. It seems there’s a new trend in town: Neknominate. 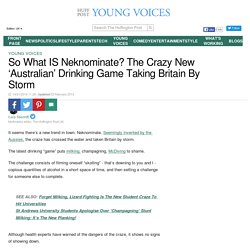 Seemingly invented by the Aussies, the craze has crossed the water and taken Britain by storm. The latest drinking “game” puts milking, champagning, McDiving to shame. The challenge consists of filming oneself “skolling” - that’s downing to you and I - copious quantities of alcohol in a short space of time, and then setting a challenge for someone else to complete. Although health experts have warned of the dangers of the craze, it shows no signs of showing down. One description, appearing on one of many Facebook pages set up in honour of the game, reads: “Neck your drink.

'Lethal' drinking game Neknominate sweeps social media. "Thanks for the nomination Luke," jokes a young man in a YouTube clip pouring what he says is a new, unopened bottle of Sambuca spirits into a pint glass along with another, unidentified drink. 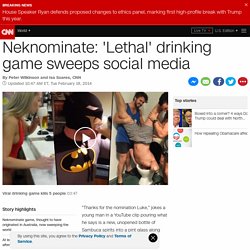 As the liquids mix, he observes: "And that is congealing nicely ... whew ... okay," before knocking back the potion. After a brief pause he declares: "I nominate [he names some friends]. You've got 24 hours lads. Get it done. " The game, known as Neknominate, is thought to have originated in Australia and is now sweeping the world. But what started for some as fun has turned deadly; at least five men aged under 30 have died after drinking deadly cocktails. "This is a lethal game," Dr. There appears to be no limit to the type of drinks that are consumed, and in what matter. Unsurprisingly the trend has prompted politicians to demand that schools play a bigger role. 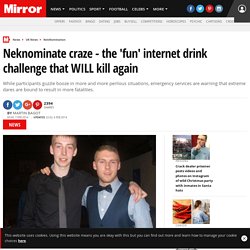 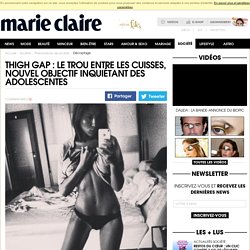