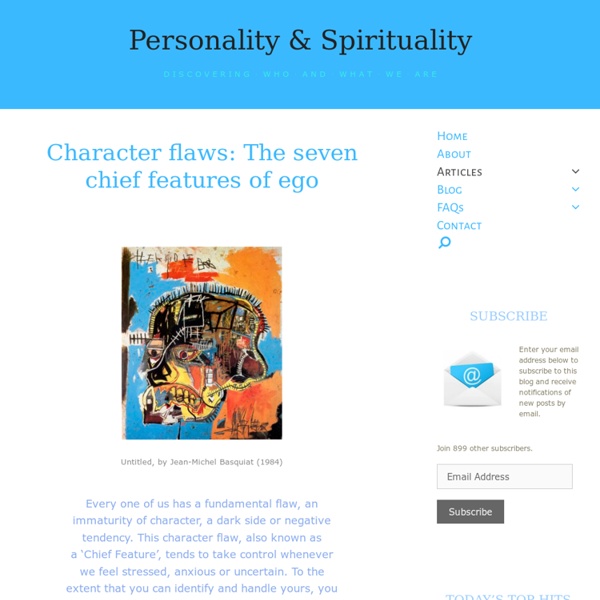 Untitled, by Jean-Michel Basquiat (1984) Every one of us has a fundamental flaw, an immaturity of character, a dark side or negative tendency. This character flaw, also known as a ‘Chief Feature’, tends to take control whenever we feel stressed, anxious or uncertain. What is a Chief Feature? Generally speaking, all personality traits (or overleaves) are neutral. A chief feature [1] is different. A chief feature is a dominant negative attitude — a defensive and potentially destructive pattern of thinking, feeling and acting. We all have at least one. Your chief feature is your primary ego defence and your main stumbling block in life. This article describes how the chief feature comes to have such a stranglehold on our personality. The seven chief features In the Michael teachings there are seven types of chief feature (character flaw / constraint / personal defect / stumbling block, whatever you prefer). Here they are listed from the most introverted to the most extroverted: Persona Shadow

Metaperceptions: How Do You See Yourself? Konstantin Sutyagin/Shutterstock I gave a toast at my best friend's wedding last summer, a speech I carefully crafted and practiced delivering. And it went well: The bride and groom beamed; the guests paid attention and reacted in the right spots; a waiter gave me a thumbs-up. I was relieved and pleased with myself. While many profess not to care what others think, we are, in the end, creatures who want and need to fit into a social universe. The ability to intuit how people see us is what enables us to authentically connect to others and to reap the deep satisfaction that comes with those ties. The bottom line: It comes down to what you think about yourself Your ideas about what others think of you hinge on your self-concept—your own beliefs about who you are. Our self-concept is fundamentally shaped by one person in particular: Mama. As an infant scans his mother's face he absorbs clues to who he is; as adults we continue to search for our reflections in others' eyes. Context is key

Scientist studies emotion in psychology, art and acting to help autistics Stanford Report, March 25, 2010 Stanford researcher David Wilkins is comparing how artists, actors and psychologists know facial emotions. He hopes to use his findings to help individuals with autism, who often are very poor at recognizing facial emotions. By Christine Blackman When actors such as Katharine Hepburn express facial emotions, 'they capture something that we find significant and that captivates us,' researcher David Wilkins said. Sometimes our deepest emotions are written all over our faces. Stanford researcher David Wilkins is studying how people can be trained to better recognize facial emotions. His findings will be integrated in an interactive learning environment to train people with autism to better recognize facial emotions. Wilkins, a lecturer in Stanford's Symbolic Systems Program, is focusing on the seven universal emotions: happiness, sadness, anger, surprise, fear, disgust and contempt. Facing the facts Good actors subtly and accurately portray authentic emotions.