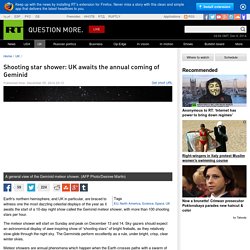 (AFP Photo/Desiree Martin) Earth's northern hemisphere, and UK in particular, are braced to witness one the most dazzling celestial displays of the year as it awaits the start of a 10-day night show called the Geminid meteor shower, with more than 100 shooting stars per hour. The meteor shower will start on Sunday and peak on December 13 and 14.

Sky gazers should expect an astronomical display of awe-inspiring show of “shooting stars” of bright fireballs, as they relatively slow-glide through the night sky. Meteor showers are annual phenomena which happen when the Earth crosses paths with a swarm of space debris, which burns up upon reaching the Earth’s atmosphere, causing “shooting stars” to appear. Reuters/Daniel Aguilar Urban dwellers would do themselves a favor by getting far away from big city lights and viewing the meteor shower in the wilderness. The Relation Between the Moon and the Human Mind. Every thing around us has an effect on something within us – be it our exposure to the sun’s ultraviolet radiation (UVR), looking at the morning sky, taking a walk in the forest, or swimming in the sea – nature’s beauty prompts the flow of hormones and energy in our body. 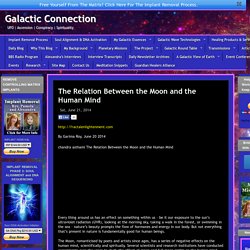 But not everything that’s present in nature is fundamentally good for human beings. The Moon, romanticised by poets and artists since ages, has a series of negative effects on the human mind, scientifically and spiritually. Several scientists and research institutions have conducted experiments over the years to study the effect of moon and full moon nights on the human mind and behaviour. It is concluded that moon does influence humans and other species on earth. Moon, Conscious and Sub-Conscious According to Quantum Physics, everything in the Universe – stars, planets, satellites or even the moon has an operating frequency. Moon, Tides and Human body. Incubus - Stellar. Top 5 "Gotta-Haves" for Stargazing.

Stargazing is an activity just about anybody can do. 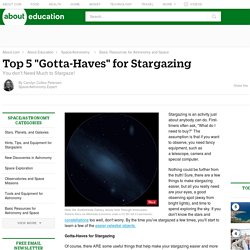 First-timers often ask, "What do I need to buy? " The assumption is that if you want to observe, you need fancy equipment, such as a telescope, camera and special computer. Nothing could be further from the truth! Sure, there are a few things to make stargazing easier, but all you really need are your eyes, a good observing spot (away from bright lights), and time to spend exploring the sky. If you don't know the stars and constellations too well, don't worry. Gotta-Haves for Stargazing Of course, there ARE some useful things that help make your stargazing easier and more comfortable, which I've written up here in a quick "Top 5" checklist for you to use. Appropriate clothing. Top 10 Space Songs. Space songs blasted off in the 1960s, when psychedelic rockers used cosmic lyrics and the ethereal sounds of synthesizers, electronic organs and otherworldly sound effects to take us to the final frontier. 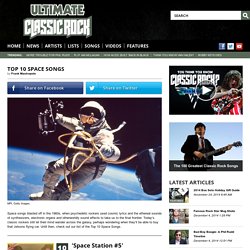 Today’s classic rockers still let their mind wander across the galaxy, perhaps wondering when they’ll be able to buy that Jetsons flying car. Until then, check out our list of the Top 10 Space Songs. From: 'Montrose' (1973) When Sammy Hagar first heard guitarist Ronnie Montrose play in 1973, he was impressed. Told that Montrose was looking for a singer, Hagar says he went straight to Ronnie’s house: “I showed him the lyrics to ‘Space Station # 5’ and he started playing that riff. From: ‘Space Oddity’ (1969) David Bowie said he wrote ‘Space Oddity’ after watching ‘2001: A Space Odyssey’: “I was very stoned when I went to see it, several times, and it was really a revelation to me.

From: ‘Fifth Dimension’ (1966) Covers of Dylan songs like ‘Mr. HubbleSite - Out of the ordinary...out of this world. Nasa counts down to human travel to Mars with Orion set for liftoff. The Orion spacecraft, designed to carry humans farther in deep space than ever before, is poised to blast off on Thursday in what Nasa hailed as a first step in mankind's journey to Mars. 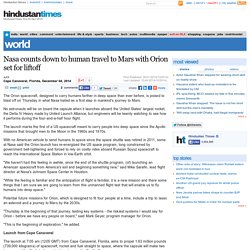 No astronauts will be on board the capsule when it launches aboard the United States' largest rocket, the Delta IV Heavy made by United Launch Alliance, but engineers will be keenly watching to see how it performs during the four-and-a-half hour flight. The launch marks the first of a US spacecraft meant to carry people into deep space since the Apollo missions that brought men to the Moon in the 1960s and 1970s. With no American vehicle to send humans to space since the space shuttle was retired in 2011, some at Nasa said the Orion launch has re-energized the US space program, long constrained by government belt-tightening and forced to rely on costly rides aboard Russian Soyuz spacecraft to reach the International Space Station in low-Earth orbit.

"This is the beginning of exploration," he added.