5 Creepy Forms of Mind Control You're Exposed to Daily 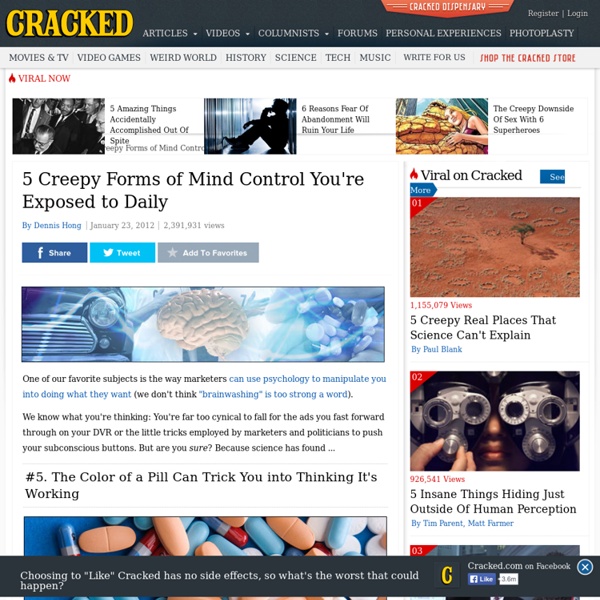 One of our favorite subjects is the way marketers can use psychology to manipulate you into doing what they want (we don't think "brainwashing" is too strong a word). We know what you're thinking: You're far too cynical to fall for the ads you fast forward through on your DVR or the little tricks employed by marketers and politicians to push your subconscious buttons. But are you sure? Because science has found ... #5. Getty Remember when Neo got to choose between the red pill and the blue pill? "I really hope being swallowed by a mirror is covered by my insurance." What? Did you notice how the red pill would let Neo "wake up" to the real world, but the blue pill would let him stay "asleep" in the dream world? Blue, blue and blue -- if not the package, then the pill itself. What the hell? So, in a different experiment, subjects were told they were going to get a sedative or a stimulant, when in fact they were getting neither -- all of the pills were placebos. Wait, it gets even stupider.

Health Sciences Institute - Miracles From the Vault - Obama's Conspiracy Dear Reader, Call it a conspiracy… Call it a betrayal… Call it an outright crime… But whatever you call it, please understand... In the next few minutes, I'm going to expose a conspiracy hatched at the highest level of government… a conspiracy so corrupt, it makes the IRS targeting scandal, Benghazi cover-up, and even NSA domestic spying look innocent. Plus, I'm going to reveal seven remarkable medical breakthroughs… breakthroughs that Obama's government is actively hiding from you at this moment. I'm talking about real cures and treatments — bona fide miracles — for cancer, diabetes, Alzheimer's, heart disease, arthritis and more. These proven treatments, with solid science backing them every step of the way, should be making front-page headline news… they should be hauling in Nobel Prizes left and right. And yet, they remain silent... leaving you a victim to pain, suffering... even death. Simple. How deadly are these drugs? My name is Jenny Thompson. Plus, I'll tell you all about... In fact...

5 Creepy Ways Animal Societies Are Organizing One thing we've learned during our extensive research here at Cracked is that animals are more and more amazing the more you learn about them. But there's a point on the graph where they're a little too amazing, and then it crosses into "unsettling." So we're not sure how to feel about the fact that... Chimpanzees Go to War You'd think "Chimpanzee Researcher" would be the most hilarious job in the world, what with the subjects always putting on people clothes and pretending to smoke pipes. More terrifying than the Congo chimp's alliance with the Clown People. Every once in a while groups of strong chimp males would form up and head north, toward the border between their territory and the land of the neighboring tribe. Then they did it again. You expect this kind of bullshit from apes. Source This isn't some freak occurrence, either. Ooh-ooh-ah-ah! And while we're on primates... Monkeys Have Prostitution, an Economy and Labor Strikes "Spare some tick-plucking?" Dumbasses. Service?

Web.com vs. GoDaddy / By Top10 Staff Stunning Professional Designs: Who Does it Best? The DIY Revolution: Which Builder Reigns Supreme? Getting Noticed: Who’s Savvier at Marketing? See how all of Web.com and GoDaddy’s features line up in our dynamic website builders comparison chart . 6 Scientific Discoveries That Laugh in the Face of Physics As we've pointed out before, there are some startlingly simple questions that science can't answer. And then there are the special occasions where the universe up and does a freaking magic trick that seems to be designed by an unjust, all-powerful entity dedicated to making scientists slowly pull off their glasses while saying, "What in the hell?" For instance ... #6. The Sun Can Make Stuff Hotter Than Itself We intuitively understand the direction that energy travels -- from the thing with energy to the thing with less energy. GettyThat asshole always has to be the center of attention. There's a discrepancy between what science says should happen and what the sun actually does, and it's known as the sun's coronal heating problem. The facts are pretty straightforward; the sun's surface sits comfortably at a blazing temperature of roughly 5,500 degrees Celsius. GettyHe's a loose cannon! GettyWould anything this awesome-looking follow rules dreamed up by some nerds? #5. #4. Getty"Wizards.

5 Places Where Society Inexplicably Breaks Down We have rules. We have a government. Most of us wear pants. We have television shows and movies, and the enviable luxury to complain about those things. Looking around, it's easy to call us civilized. But we're animals. #5. I like to mail headshots and DVDs of myself waving politely to our soldiers, firemen and several random addresses, just to remind everyone what we're fighting for. "Hi, I'm the only one in the world who can deliver your package, and it is not a priority for me." It's the same feeling people get when they go to the DMV (similarly understaffed, similarly line-heavy and similarly useless most of the time). At the DMV or the post office, unlike anywhere else, when someone enters and sees a line, they immediately don't believe it. If you want to see hate on a person's face, go to your local post office and watch people. #4. "Raise your hands in the air if you don't care! "Everyone, could -- if we could all calm down, there's -- I think someone died, somewhere." #3. But no.

Wikipedia, We Have a Problem | a case study The End of Online Anonymity: Why Will You Be Freaking Out? When you make forum posts beginning with, "I'm not a racist, but..." or call us retards in the comments, do you use your real name? What if you had to? Cracked has no plans to implement such a feature, but the world certainly seems to be heading that direction. You probably saw the raging backlash that occurred when one of the world's largest video game companies tried to institute a "you must post under your real name" policy: The idea lasted about two days before they were forced to back down. But that felt like a temporary reprieve for anonymity. For all that's going to accomplish. The curtain is coming down (or going up, depending on what type of curtain you're picturing) and it's fascinating to see how differently people react to that possibility. So where do you fall on this spectrum? People With Secret (But Perfectly Legal) Online Lives Let's get this out of the way right now: We know you don't have to be a troll to be afraid of revealing your identity online. Hint: It's the eyes.

Jimmy Wales, Founder of Wikipedia: Create and enforce new policies that allow for true scientific discourse about holistic approaches to healing. Wikipedia is widely used and trusted. Unfortunately, much of the information related to holistic approaches to healing is biased, misleading, out-of-date, or just plain wrong. For five years, repeated efforts to correct this misinformation have been blocked and the Wikipedia organization has not addressed these issues. As a result, people who are interested in the benefits of Energy Medicine, Energy Psychology, and specific approaches such as the Emotional Freedom Techniques, Thought Field Therapy and the Tapas Acupressure Technique, turn to your pages, trust what they read, and do not pursue getting help from these approaches which research has, in fact, proven to be of great benefit to many. This has serious implications, as people continue to suffer with physical and emotional problems that might well be alleviated by these approaches. Larry Sanger, co-founder of Wikipedia, left the organization due to concerns about its integrity.

5 Online Petitions That Prove Democracy is Broken The White House has set up a petition site for Internet commenters, which is weird, because it's usually in favor of democracy.* "We the People" lets random users make demands of the government. YouTube comments already provide more convincing arguments against democracy than Marx and Mao combined. After all, the person asking Yahoo Answers "How is babby formed?" *ACHIEVEMENT UNLOCKED: Guarantee insane political comments in the lead sentence. Now that the government has given democracy itself a comment section, let's see what the Internet is doing with it, shall we? #5. NOTE:Petitions are notoriously wordy because idiots think talking longer makes a stronger argument. Full X-Files Text It's obvious that there's life somewhere else in the universe (especially since every star has planets), and equally obvious that there's none on Earth. Getty"If I told you that you could ride it into space, would you look at the pictures of it?" We're not saying E.T. #4. Full text #3.

Diluting the scientific method: Ars looks at homeopathy Welcome to a special edition of Nobel Intent. Beyond keeping you familiar with the comings and goings of modern science, we have consistently expressed concern regarding science education and the public understanding of science. Key to that understanding are the basic features of science, such as how scientific concepts are formulated and tested and why they typically produce a better understanding of the natural world than alternative approaches. But science can be a tricky thing to define, and it's sometimes easier to contrast it with some of the arguments that pose as science. Unfortunately, most of those issues are entangled with implications that keep the basic question—is this science? That's why a special edition of the journal Homeopathy appears to be a gift, allowing us to look at science and psuedoscience without getting entangled with politics and religion. By criticizing homeopathy, we hope to illuminate the general distinctions between science and pseudoscience.

The 6 Weirdest Ways Wild Animals Are Having to Adapt to Us Humanity's track record with animals has never been stellar. After centuries of ocean dumping, worldwide deforestation, domestication and overhunting, it's safe to say we've got a greasy, opposable thumb in every one of Mother Nature's pies. That's not to say that humanity's only effect on the animal kingdom is pure destruction; in fact, sometimes our ecological footprint looks more like a clown shoe. #6. Talking Birds Are Teaching Each Other to Swear Probably the only thing you know about parrots and cockatoos is that they can talk. After all, the pets that are raised among humans and learn (or learn to imitate) dozens of words sometimes either escape or are released into the wild. That's why people around Sydney, Melbourne and other big cities in Australia have found wild cockatoos using English phrases. Now imagine how crazy you'd think you were going if one day you were walking through the woods and you suddenly heard a disembodied bird voice tell you to eat a dick. #5. #4. Photos.com