How did life originate? 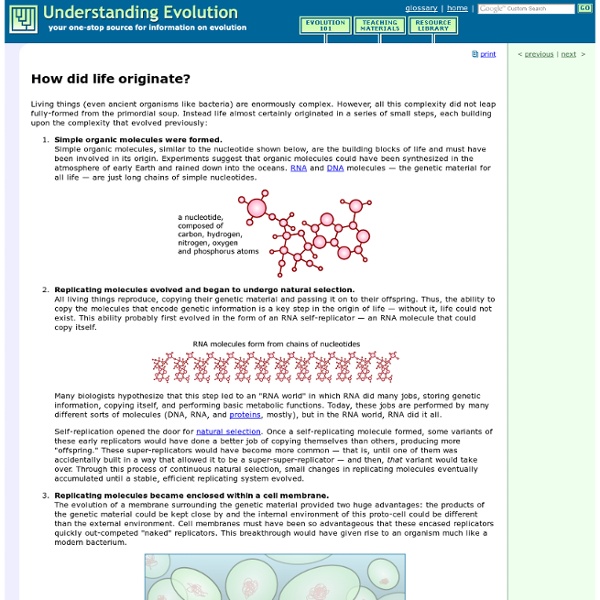 How did life originate? Living things (even ancient organisms like bacteria) are enormously complex. However, all this complexity did not leap fully-formed from the primordial soup. Instead life almost certainly originated in a series of small steps, each building upon the complexity that evolved previously: Simple organic molecules were formed. Simple organic molecules, similar to the nucleotide shown below, are the building blocks of life and must have been involved in its origin. Multicellularity evolved.

How We Are Evolving Thousands of years ago humans moved for the first time into the Tibetan plateau, a vast expanse of steppelands that towers some 14,000 feet above sea level. Although these trailblazers would have had the benefit of entering a new ecosystem free of competition with other people, the low oxygen levels at that altitude would have placed severe stresses on the body, resulting in chronic altitude sickness and high infant mortality. Earlier this year a flurry of genetic studies identified a gene variant that is common in Tibetans but rare in other populations. This variant, which adjusts red blood cell production in Tibetans, helps to explain how Tibetans adapted to those harsh conditions. The dis­covery, which made headlines around the world, provided a dra­­matic example of how humans have undergone rapid biological adaptation to new environmental circumstances in the recent past. Select an option below:

Jesus Christ in comparative mythology The study of Jesus Christ in comparative mythology is the examination of the narratives of the life of Jesus in the Christian gospels, traditions and theology, as it relates to Christian mythology and other religions. For over a century, various authors have drawn a number of parallels between the Christian views of Jesus and other religious or mythical domains.[1] These include Greco-Roman mysteries, ancient Egyptian myths and more general analogies involving cross-cultural patterns of dying and rising gods in the context of Christ myth theory.[2] While some scholars continue to support these analogies, others contend that the perceived similarities are often without historical basis, that first century monotheistic Galilean Jews would not have been open to pagan myths, and claim that the analogies are usually based on parallelomania, exaggerating the importance of trifling resemblances.[3][1][4][5]

"The Thing": A 140,000-Year-Old Organism Discovered in Antarctica's Ice-Shrouded Lake Vostok An ancient living laboratory of our planet's past in Antarctica may have provided a preview of what we can expect to find deep below the barren surface of Mars and in the ice-shrouded seas of Jupiter's Europa. Two of the world's leading experts on life at the lower temperature extremes, Buford Price of the University of California, Berkeley and Todd Sowers of Penn State observed that microbes colonizing life appear to have two levels of metabolism: a survival metabolism in which they remain alive but become dormant until exposed to nutrients or higher temperatures, or, a maintenance metabolism for steady sustained growth. The team observed that some organisms in permafrost appear to have "protein repair enzymes that maintain active recycling of certain amino acids needed for cell repair for at least 30,000 years." They added that the "extremely low expenditures of survival energy enable microbial communities in extreme environments to survive indefinitely."

Top 10 Myths About Evolution – with Downloadable PDF Email If you have been looking for a simple, easy to follow quick guide to evolution… we’ve got it. Our friends at the Skeptics Society gave us permission to reprint this. Below is the text. Learn it. Share it. Evolution in Action: Lizard Moving From Eggs to Live Birth Evolution has been caught in the act, according to scientists who are decoding how a species of Australian lizard is abandoning egg-laying in favor of live birth. Along the warm coastal lowlands of New South Wales (map), the yellow-bellied three-toed skink lays eggs to reproduce. But individuals of the same species living in the state's higher, colder mountains are almost all giving birth to live young. Only two other modern reptiles—another skink species and a European lizard—use both types of reproduction. (Related: "Virgin Birth Expected at Christmas—By Komodo Dragon.")

Propaganda and Disinformation: Videotapes in the Media Resources Center, UC Berkeley Documentaries About Propaganda Are We Winning, Mommy? An examination of the historical roots of the Cold War and its effects on American life. The film features a wealth of images and historical footage from both European and American archives as well as revealing interviews with some of the key players on both sides.

50-Legged Creature May Have Been Top Predator Of Ancient Seafloor An artist's rendering of a Tegopelte, a foot-long arthropod that lived 500 million years ago.Marianne Collins An ancient cockroach-like creature nearly a foot long once skittered along the seafloor in what is now Canada, a new fossil find reveals. The fossil, a series of 500-million-year-old tracks, captured the movement of a large seafloor-dwelling creature with at least 25 pairs of legs.

The Improvisational Brain Credit: Flickr user maistora One summer at the annual Bremen Music Festival in Germany, Robert Levin, a classical pianist, was in the midst of improvising a passionate and wild cadenza during Beethoven’s “C Major Piano Concerto.” A cadenza is a passage in a concerto during which the orchestra ceases and a soloist strikes out on his own, improvising within the style of the piece. Up until the early nineteenth century, many classical composers wrote space for these cadenzas within their works. Levin is one of a handful of musicians who has taken it upon himself to revive the practice of classical improvisation.

New Hypothesis for Human Evolution and Human Nature Click on image for a high-resolution version. Domestic animals, like this water buffalo in Viet Nam, live intimately with humans and provide renewable resources to humans that communicate well with them. Photo by Greg Luna. 20 July 2010 — It's no secret to any dog-lover or cat-lover that humans have a special connection with animals. Neandertal Children Developed on the Fast Track Parents who think their kids are growing up too fast should be glad they're not Neandertals. A new study of the fossilized teeth of eight Neandertal children finds that their permanent teeth grew significantly faster and erupted earlier than those of our own species, Homo sapiens. Taken with recent studies showing subtle differences in the brain maturation and developmental genes in Neandertals and H. sapiens, the new data suggest Neandertal kids may have reached adulthood a few years faster than modern human children do. Researchers have long known that humans grow up slowly. We take almost twice as long as chimpanzees to reach adulthood. Our distant ancestors were more like chimps; Lucy and other australopithecines, for example, matured quickly and died young.