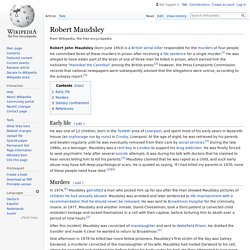 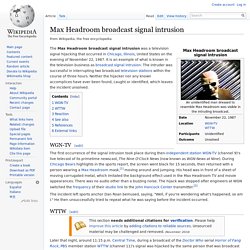 It is an example of what is known in the television business as broadcast signal intrusion. The intruder was successful in interrupting two broadcast television stations within the course of three hours. Neither the hijacker nor any known accomplices have ever been found, caught or identified, which leaves the incident unsolved. WGN-TV[edit] The incident left sports anchor Dan Roan bemused, saying, "Well, if you're wondering what's happened, so am I. " Anatoly Moskvin - Wikipedia. Anatoly Yurevych Moskvin (Russian: Москвин, Анатолий Юрьевич, born 1 September 1966) is a Russian academic and linguist from Nizhny Novgorod, Russia, who was arrested in 2011 after the mummified bodies of twenty-six[1][2] girls between the ages of three and fifteen[1][2][3][4][5] were discovered in his apartment. 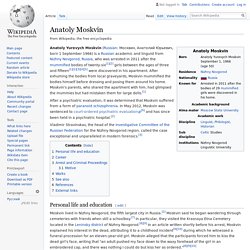 After exhuming the bodies from local graveyards, Moskvin mummified the bodies himself before dressing and posing them around his home. Moskvin's parents, who shared the apartment with him, had glimpsed the mummies but had mistaken them for large dolls.[1] After a psychiatric evaluation, it was determined that Moskvin suffered from a form of paranoid schizophrenia. In May 2012, Moskvin was sentenced to court-ordered psychiatric evaluation[6] and has since been held in a psychiatric hospital.[2]

Nine familial exterminations - Wikipedia. The nine familial exterminations or nine kinship exterminations (simplified Chinese: 株连九族; traditional Chinese: 株連九族; pinyin: zhū lián jiǔ zú; literally: "guilt by association of nine of a group/clan"; also known as zú zhū (族誅), literally "family execution" and miè zú (灭族/滅族), literally "family extermination" or "execution of nine relations") was the most serious punishment for a capital offense in Ancient China.[1][2][3] A collective punishment typically associated with offenses such as treason, the punishment involved the execution of all relatives of an individual, which were categorized into nine groups. 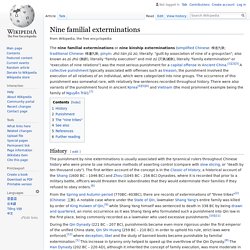 The occurrence of this punishment was somewhat rare, with relatively few sentences recorded throughout history. There were also variants of the punishment found in ancient Korea[4][5][6] and Vietnam (the most prominent example being the family of Nguyễn Trãi).[7] History[edit] Punishment[edit] The Stopwatch Gang - Wikipedia. The gang was famous for the brilliant planning of their jobs. 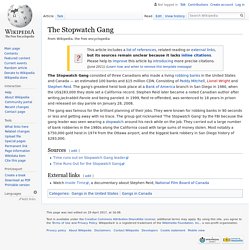 They were known for robbing banks in 90 seconds or less and getting away with no trace. The group got nicknamed 'The Stopwatch Gang' by the FBI because the gang leader was seen wearing a stopwatch around his neck while on the job. They carried out a large number of bank robberies in the 1980s along the California coast with large sums of money stolen. Most notably a $750,000 gold heist in 1974 from the Ottawa airport, and the biggest bank robbery in San Diego history of $283,000. Sources[edit] External links[edit] Watch Inside Time, a documentary about Stephen Reid, National Film Board of Canada. Heaven's Gate - How and When It May Be Entered. Heaven's Gate - How and When It May Be Entered. Non-alien Creatures Wiki. Machine elves (also known as fractal elves, self-transforming elf machines or"Jenny") is a term coined by the late ethnobotanist, writer and philosopher Terence McKenna to describe the apparent entities that are often reported by individuals using tryptamine-based psychedelic drugs, especially DMT References to such encounters can be found in many cultures ranging from shamanic traditions of Native Americans to indigenous Australians and African tribes, as well as among Western users of these substances. 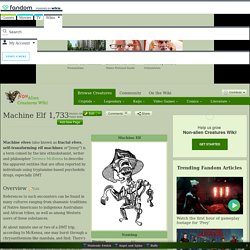 At about minute one or two of a DMT trip, according to McKenna, one may burst through a chrysanthemum-like mandala, and find: There's a whole bunch of entities waiting on the other side, saying "How wonderful that you're here! You come so rarely! We're so delighted to see you! " James Kent has put forth a different explanation for machine elves. How the Cold War 'fruit machine' tried to determine gay from straight - Ottawa. It's not fiction — although it sounds like something straight out of a dystopian novel. 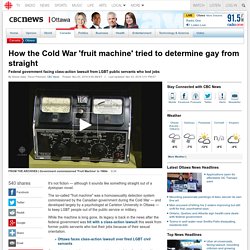 The so-called "fruit machine" was a homosexuality detection system commissioned by the Canadian government during the Cold War — and developed largely by a psychologist at Carleton University in Ottawa — to keep LGBT people out of the public service or military. While the machine is long gone, its legacy is back in the news after the federal government was hit with a class-action lawsuit this week from former public servants who lost their jobs because of their sexual orientation. Ottawa faces class-action lawsuit over fired LGBT civil servants. 14,000 copies of 'Jerry Maguire' became this. Retrospace: Vintage Scan #25: A Citizen's Handbook on Nuclear Attack (1968) The Cold War scare of nuclear annihilation probably was at its zenith during the fifties and early sixties; however, the threat of mass extinction lingered well into the eighties (anyone remember "The Day After"?). 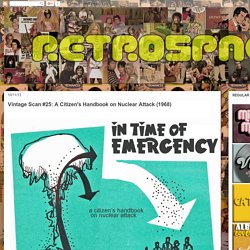 One could make an argument that we are no less safe today. For instance, if Pakistan and India start dropping bombs on each other, the repercussions will be on a global scale. You could also argue that atomic weapons are in the hands of far less stable countries. Where the Cold War threat sat at a stalemate of mutually assured destruction between two superpowers, the climate today is much more spread out, with fingers on the button that probably shouldn't be trusted with a toaster let a lone an Earth destroying warhead. But, there are other factors at work (such as the capabilities to send them long range without intercept, etc.), but the bottom line is this: the threat may still exist, but the fear of attack was far more widespread five decades ago. Step 1. Jack Fiddler - Wikipedia. Jack Fiddler, also known as Zhauwuno-geezhigo-gaubow (from the Oji-Cree: Zhaawano-giizhigo-gaabaw meaning "He who stands in the southern sky") and as Maisaninnine or Mesnawetheno (in Swampy Cree meaning "Stylish man") (c. 1839-September 30, 1907) was an ogimaa (chief and shaman) of the Sucker doodem among the Anishinaabe in what is now northwestern Ontario. 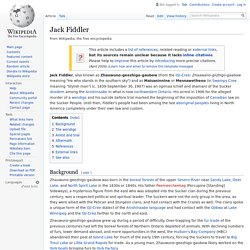 His arrest in 1906 for the alleged murder of a wendigo and his suicide before trial marked the beginning of the imposition of Canadian law on the Sucker People. Until then, Fiddler's people had been among the last aboriginal peoples living in North America completely under their own law and custom. Background[edit] Christine Chubbuck - Wikipedia. Christine Chubbuck[a] (August 24, 1944 – July 15, 1974) was an American television news reporter who worked for WTOG and WXLT-TV in Florida. 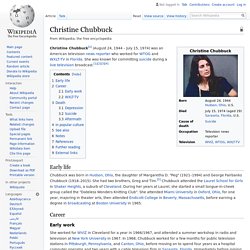 She was known for committing suicide during a live television broadcast.[1][2][3][4] Early life Chubbuck was born in Hudson, Ohio, the daughter of Margaretha D. "Peg" (1921–1994) and George Fairbanks Chubbuck (1918–2015). Harry Houdini, Debunking, Doyle and Pacts - Paranormal Investigation. Saartjie Baartman - Wikipedia. Life[edit] Sara Baartman, called "Saartjie" (a nickname for Sara), was likely born in 1789 in the Gamtoos valley in the eastern part of the Cape Colony.

In 1810, she went to England with her employer, a free black man (a Cape designation for someone of slave descent) called Hendrik Cesars, and William Dunlop, a English doctor who worked at the Cape slave lodge.[1] They sought to show her for money on the London stage. Sara Baartman spent four years on stage in England and Ireland. Early on, her treatment on the Picadilly stage caught the attention of British abolitionists, who argued that her performance was indecent and that she was being forced to perform against her will.

Ultimately, the court ruled in favor of her exhibition after Dunlop produced a contract made between himself and Baartman. Marvels of Our World. Mehran Karimi Nasseri. Mehran Karimi Nasseri (مهران کریمی ناصری pronounced [mehˈrɒn kʲæriˈmi nɒseˈri]; born 1942), also known as Sir, Alfred Mehran,[1] is an Iranian refugee who lived in the departure lounge of Terminal One in Charles de Gaulle Airport from 26 August 1988 until July 2006, when he was hospitalized for an unspecified ailment. His autobiography has been published as a book (The Terminal Man) and was the basis for the Tom Hanks movie The Terminal. Early life[edit] Monticello Miracle - Wikipedia. The Monticello Miracle was an incident in which a racehorse at Monticello Raceway hit World War II veteran Don Karkos in the exact spot where he had received shrapnel and lost sight in one of his eyes during a World War II naval battle.

This blow caused him to regain his sight, most likely by dislodging the shrapnel.[1][2] References[edit] External links[edit] WikiNews article. Monticello Miracle - Wikipedia. Paul Kern - Wikipedia. Paul Kern (died 1955) was a Hungarian soldier who was said to have been shot in the head by a Russian soldier in 1915 during World War I.[1] The bullet removed part of his frontal lobe. Rather than killing him, this made him unable to sleep.[2] Biography[edit] Great Big Story. Ashley Madison Hack: Who the users are, what they look for, and the government officials among them. What Do Prisoners Make for Victoria's Secret? Tens of thousands of US inmates are paid from pennies to minimum wage—minus fines and victim compensation—for everything from grunt work to firefighting to specialized labor.

Here's a sampling of what they make, and for whom. Eating in: Each month, California inmates process more than 680,000 pounds of beef, 400,000 pounds of chicken products, 450,000 gallons of milk, 280,000 loaves of bread, and 2.9 million eggs (from 160,000 inmate-raised hens). Starbucks subcontractor Signature Packaging Solutions has hired Washington prisoners to package holiday coffees (as well as Nintendo Game Boys). Potemkin village. L'appel du vide - Wikipedia. L’appel du vide, literally "the call of the void" is a French phrase used to refer to intellectual suicidal thoughts, or the urge to engage in self-destructive (suicidal) behaviors during everyday life.[1] Examples include thinking about swerving in to the opposite lane while driving, or feeling the urge to jump off a cliff edge while standing on it. Christic Institute - Wikipedia.

Christic notably represented victims of the nuclear disaster at Three Mile Island; they prosecuted KKK and American Nazi Party members for killing communist workers party demonstrators in the 1979 Greensboro Massacre, as well as police and federal agents whom they said had known about potential violence and had not adequately protected the victims; and they defended Catholic workers providing sanctuary to Salvadoran refugees (American Sanctuary Movement). The Driving Dead: Human Cadavers Still Used In Car Crash Testing. Facing budgetary pressures, researchers in Spain said they're going to stop using crash test dummies and start using human cadavers. Raëlism. Raëlism, also known as Raëlianism or the Raëlian movement, is a UFO religion that was founded in 1974 by Claude Vorilhon, now known as Raël.

Burlington Bunker, under RAF Corsham, Wiltshire. Inside ISIS: The Making of a Radical. Death in Texas: Analysing the Last Words of 478 Death Row Prisoners. Roughly once every 22 days, a convicted killer is executed in America’s busiest death house: the Huntsville “Walls” Unit in Texas. He cannot choose his final meal, but once strapped to the execution table, with IV lines in his arms, a chaplain’s hand on his ankle, and a microphone suspended above his head, he is allowed to choose his final words… People’s lives are full of firsts, and amongst the most significant are a child’s first words. Our Lady of Fátima. Our Lady of Fátima (Portuguese: Nossa Senhora de Fátima, European Portuguese: [ˈnɔsɐ sɨˈɲoɾɐ dɨ ˈfatimɐ][1]) is the title based on purported apparitions to three shepherd children at Fátima, Portugal, on the thirteenth day of six consecutive months in 1917, beginning on May 13.

The Lost Boys of California. 6 Of The Most Fascinating Stories From The CIA’s Huge Archive Of Now-Declassified Files. The Tea Party is timeless. Culture jamming. 11 conspiracy theories that turned out to be true. Economic Inequality: It’s Far Worse Than You Think. 5 Real 'Conspiracies' Confirmed By People Swept Up In Them. Mass shootings in America: The big picture in charts and graphs. Sovereign Citizens Are A Larger Threat To The US Than Jihadists. Aleppo: Enduring and innovating in the midst of conflict. 'It was supposed to be a school' Secret Service: Man planned to kidnap first dog. Wealth Inequality In Russia Is By Far The Highest In The World. How great is America really? A visual guide. The 7 Creepiest Last Words That Murderers Have Ever Spoken — Just In Case You Didn't Want To Sleep Tonight. Web Simulator Predicts How You Will Die - Thrillist. The Driving Dead: Human Cadavers Still Used In Car Crash Testing.