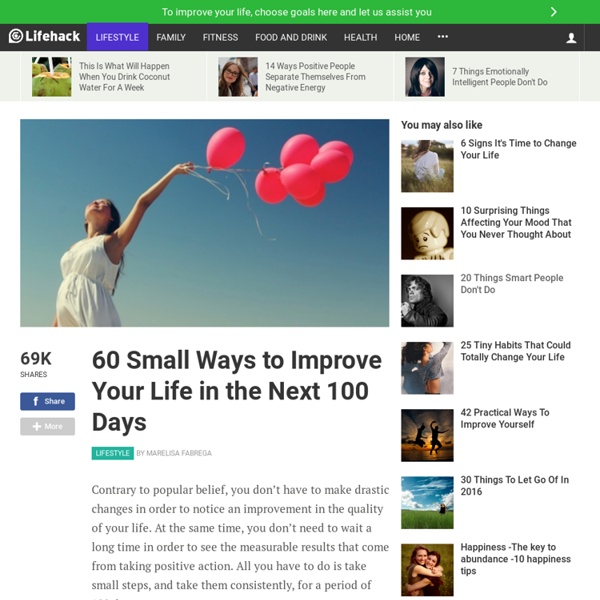 Contrary to popular belief, you don’t have to make drastic changes in order to notice an improvement in the quality of your life. At the same time, you don’t need to wait a long time in order to see the measurable results that come from taking positive action. All you have to do is take small steps, and take them consistently, for a period of 100 days. Below you’ll find 60 small ways to improve all areas of your life in the next 100 days. Home 1. Day 1: Declutter MagazinesDay 2: Declutter DVD’sDay 3: Declutter booksDay 4: Declutter kitchen appliances 2. If you take it out, put it back.If you open it, close it.If you throw it down, pick it up.If you take it off, hang it up. 3. A burnt light bulb that needs to be changed.A button that’s missing on your favorite shirt.The fact that every time you open your top kitchen cabinet all of the plastic food containers fall out. Happiness 4. 5. 6. How many times do you beat yourself up during the day? 7. Learning/Personal Development 8. 9. 10. 11. 12. 13.

How can I improve my short term memory? Q: How can I improve my mem­ory? Is there a daily exer­cise I can do to improve it? A: The most impor­tant com­po­nent of mem­ory is atten­tion. By choos­ing to attend to some­thing and focus on it, you cre­ate a per­sonal inter­ac­tion with it, which gives it per­sonal mean­ing, mak­ing it eas­ier to remember. Elab­o­ra­tion and rep­e­ti­tion are the most com­mon ways of cre­at­ing that per­sonal inter­ac­tion. The Useless Class It happens. You've enrolled in a completely useless class. You know the one. If you're in college you've probably announced to your friends, "I can't believe they're making me take this class." Or you tell your advisor, "I just need 3 more credits to graduate-- I'll take anything." Sometimes it's the only class in the time slot you have available.

The Secret To A Lasting Relationship When a relationship becomes a one-way way street, it ends up at a dead end sooner or later. Learn to keep the traffic flowing both ways with conversation, forgiveness and mindful awareness to keep your relationship growing well into the future. It all starts with that inner conversation you have with yourself. Be aware of it, and find how easy it is to nurture your relationship in the direction you want it to go.

30 Days to Changing Your Game GAME ON!! [Day 1 - 30] Can you believe it?! Day #1 of 30 Days to Changing Your Game is FINALLY here!! YAY!! Places to see at least once in life They say there are places in this world that anyone should see them at least once in life. Although we want each of you to go see them live, and we offer in the form of photos below. If I had to redo the path for real, the steps you would wear in Norway in Greece, Iceland, Netherlands, Croatia, China and Bora Bora. The Visual Leap - About Visual Thinking >> Home • About Visual Thinking About Visual Thinking Visual thinking, also called visual learning, is a proven method of organizing ideas graphically - with concept maps, mind maps and webs. Scientifically based research demonstrates that visual learning techniques improve memory, organization, critical thinking and planning. Visual thinking is an intuitive and easy-to-learn strategy that works for many academic and professional projects. The more complex the task or idea, the more useful this approach can be.

Game theory Game theory is the study of strategic decision making. Specifically, it is "the study of mathematical models of conflict and cooperation between intelligent rational decision-makers."[1] An alternative term suggested "as a more descriptive name for the discipline" is interactive decision theory.[2] Game theory is mainly used in economics, political science, and psychology, as well as logic, computer science, and biology. The subject first addressed zero-sum games, such that one person's gains exactly equal net losses of the other participant or participants. How to find true friends (and love) in 45 minutes David Rowan Editor of Wired magazine This article was featured in Times Magazine, 5 November. There's a shorter version in the Ideas Bank section on the current Wired magazine.

95 Questions to Help You Find Meaning and Happiness post written by: Marc Chernoff Email At the cusp of a new day, week, month or year, most of us take a little time to reflect on our lives by looking back over the past and ahead into the future. We ponder the successes, failures and standout events that are slowly scripting our life’s story.

Training Program for Half Marathons 12 Week Half Marathon Training Program The half marathon is often the intermediate goal for those runners looking at doing their first marathon. It is also the longest distance running event that experienced runners can do without interrupting their regular racing and training program. For these reasons the half marathon is a very popular event.

Time on the Brain: How You Are Always Living In the Past, and Other Quirks of Perception I always knew we humans have a rather tenuous grip on the concept of time, but I never realized quite how tenuous it was until a couple of weeks ago, when I attended a conference on the nature of time organized by the Foundational Questions Institute. This meeting, even more than FQXi’s previous efforts, was a mashup of different disciplines: fundamental physics, philosophy, neuroscience, complexity theory. Crossing academic disciplines may be overrated, as physicist-blogger Sabine Hossenfelder has pointed out, but it sure is fun. Like Sabine, I spend my days thinking about planets, dark matter, black holes—they have become mundane to me.

To Test a Powerful Computer, Play an Ancient Game DEEP BLUE's recent trouncing of Garry Kasparov sent shock waves through the Western world. In much of the Orient, however, the news that a computer had beaten a chess champion was likely to have been met with a yawn. While there are avid chess players in Japan, China, Korea and throughout the East, far more popular is the deceptively simple game of Go, in which black and white pieces called stones are used to form intricate, interlocking patterns that sprawl across the board.