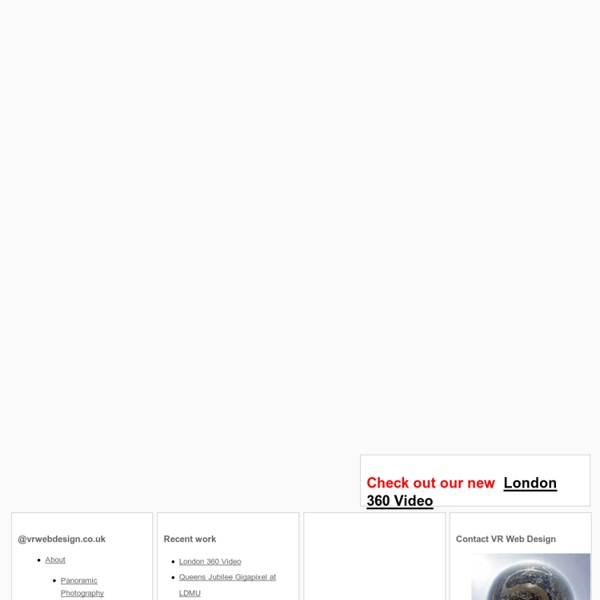 The Code / Fundamental Pattern - Nature appears to rely on one core recurring pattern to evolve life at every scale What are some of the ways knowledge of the pattern is being applied? Fan and Propeller Technologies Pax Scientific has patented the application of the phi spiral for translating “nature's flow efficiencies into streamlined design geometries.” The result is more efficient and effective technologies such as fans, turbines, pumps, and more. A small phi-design propeller is able to circulate a million gallon water storage tank in the form of a torus.

Mount Everest-Monte Everest -360 panorama view from summit - Climbing Mt Everest - Nepal Trekking-panoramic photo from top of Mont Everest It is from a book titled Everest: Reflections From the Top by Christine Gee & Garry Weare which just been published. It contains contributions from many of the climbers who have reached the top during the last 50 years. Why did I climb Everest? Nerd Paradise Posted on: 10 Cado 7:0 - 5.27.29 So you've procrastinated again. You told yourself you wouldn't do this 2 months ago when your professor assigned you this. But you procrastinated anyway. Shame on you.

Cosmic Law - The Great Law of Nothingness This familiar symbol for Sunyata was made with a single brush stroke by the old zen master Shibayama. It represents a perfect circle, perfection, that is, within the limitations of the always imperfect material world. It conveys the sense of some-thing emanating from no-thing-ness. It represents the vagina, the gateway of birth into manifestation, and also the first moment of the creation of the universe, the big bang, when every thing emerged from the unformed vacuum point.

10 Search Engines to Explore the Invisible Web Not everything on the web will show up in a list of search results on Google or Bing; there are lots of places that their web crawlers cannot access. To explore the invisible web, you need to use specialist search engines. Here are our top 12 services to perform a deep internet search. Simply, it’s a catch-all term for online content that will not appear in search results or web directories. There are no official data available, but most experts agree that the invisible web is several times larger than the visible web.

The effect of Music on Plants (The Plant Experiments) About Positive Music by Don Robertson The Plant Experiments In 1973, a woman named Dorothy Retallack published a small book called The Sound of Music and Plants. 60 Small Ways to Improve Your Life in the Next 100 Days Contrary to popular belief, you don’t have to make drastic changes in order to notice an improvement in the quality of your life. At the same time, you don’t need to wait a long time in order to see the measurable results that come from taking positive action. All you have to do is take small steps, and take them consistently, for a period of 100 days. Acropole d'Athènes The Propylaia, famous already in antiquity for its brilliant coffered ceilings and the unique design of the monumental entrance to the sanctuary of Athena, was a work of the architect Mnesikles (437-432 B.C.). It consists of a central building with two six-columned Doric porticoes east and west and two Ionic colonnades in the interior, framed at the north and south by two wings with porches in the Doric order. The outbreak of the Peloponnesian War meant that the final work on the surfaces of the monument was never completed. The destruction of most of the superstructure of the central building during the years 1640-1830 , after the explosion of gunpowder that was stored in the monument by the Turks, has led to a gradual loss of authentic building material, so that until now no more than one fifth of it had been recognised.