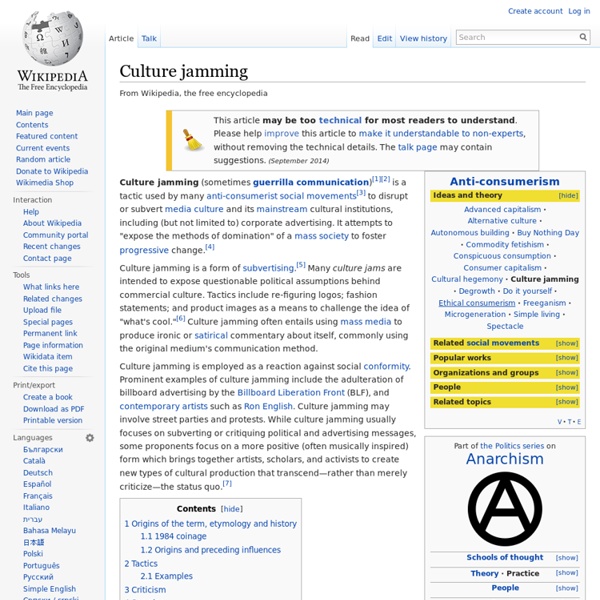 Culture jamming (sometimes guerrilla communication)[1][2] is a tactic used by many anti-consumerist social movements[3] to disrupt or subvert media culture and its mainstream cultural institutions, including (but not limited to) corporate advertising. It attempts to "expose the methods of domination" of a mass society to foster progressive change.[4] Culture jamming is a form of subvertising.[5] Many culture jams are intended to expose questionable political assumptions behind commercial culture. Tactics include re-figuring logos; fashion statements; and product images as a means to challenge the idea of "what's cool Origins of the term, etymology and history[edit] 1984 coinage[edit] As awareness of how the media environment we occupy affects and directs our inner life grows, some resist. Origins and preceding influences[edit] Tactics[edit] Culture jamming is a form of disruption that plays on the emotions of viewers and bystanders. Examples[edit] Groups Criticism[edit] See also[edit]

Improv Everywhere Improv Everywhere (often abbreviated IE) is a comedic performance art group based in New York City, formed in 2001 by Charlie Todd. Its slogan is "We Cause Scenes". The group carries out pranks, which they call "missions", in public places. The stated goal of these missions is to cause scenes of "chaos and joy." Some of the group's missions use hundreds or even thousands of performers and are similar to flash mobs, while other missions utilize only a handful of performers. Improv Everywhere has stated that they do not identify their work with the term flash mob, in part because the group was created two years prior to the flash mob trend.[1] While Improv Everywhere was created years before YouTube, the group has grown in notoriety since joining the site in April of 2006. Background[edit] Charlie Todd Missions / Events[edit] Frozen Grand Central[edit] The No Pants Subway Ride[edit] Participants at the No Pants Subway Ride mission in January 2010 Fake U2 Concert[edit] Best Buy Uniform Prank[edit]

Olmec Olmec jadeite mask 1000–600 BCE The Olmec were the first 'major' civilization in Mexico following a progressive development in Soconusco.[1] They lived in the tropical lowlands of south-central Mexico, in the present-day states of Veracruz and Tabasco. It has been speculated that Olmec derive in part from neighboring Mokaya and/or Mixe–Zoque. The Olmec flourished during Mesoamerica's formative period, dating roughly from as early as 1500 BCE to about 400 BCE. The aspect of the Olmecs most familiar now is their artwork, particularly the aptly named "colossal heads".[4] The Olmec civilization was first defined through artifacts which collectors purchased on the pre-Columbian art market in the late 19th century and early 20th century. Etymology[edit] The name "Olmec" comes from the Nahuatl word for the Olmecs: Ōlmēcatl /oːlˈmeːkat͡ɬ/ (singular) or Ōlmēcah /oːlˈmeːkaʔ/ (plural). Overview[edit] Origins[edit] La Venta[edit] Decline[edit] Art[edit] Fish Vessel, 12th–9th century BCE.

Operation Mindfuck Operation Mindfuck or OM is an important practice in the Discordian religion. The concept was developed by Kerry Thornley and Robert Anton Wilson in 1968[1] and given its name by Wilson and Robert Shea in The Illuminatus! Trilogy.[2] It is most often manifested as a decentralized campaign of civil disobedience, activism, art movements, especially performance art and guerrilla art, culture jamming, graffiti and other vandalism, practical jokes, hoaxes, reality hacking, chaos magic, words of power, trolling and anything else that is believed to bring about social change through disrupting paradigms and thus forcing the victim to question the parameters of one's reality tunnel. Purposes[edit] There is a disagreement among Discordians as to whether or not, through OM, they should seek to improve society, topple it or claim that the practice is in fact only for entertainment. In The Illuminatus! Projects[edit] Current progress in Operation Mindfuck includes: See also[edit] References[edit]

Get anyone to like you – Instantly – Guaranteed Get anyone to like you - Instantly - Guaranteed If you want people to like you, make them feel good about themselves. This golden rule of friendship works every time - guaranteed! The principle is straightforward. If I meet you and make you feel good about yourself, you will like me and seek every opportunity to see me again to reconstitute the same good feeling you felt the first time we met. The simple communication techniques that follow will help you keep the focus of the conversation on the person you are talking to and make them feel good about themselves. The Big Three Our brains continually scan the environment for friend or foe signals. Eyebrow Flash The eyebrow flash is a quick up and down movement of the eyebrows. Head Tilt The head tilt is a slight tilt of the head to one side or the other. Smile A smile sends the message "I like you." Empathic Statements Empathic statements keep the focus on the other person. Example 1 George : I've been really busy this week. Example 2 Flattery

Cacophony Society According to self-designated members of the Society, “you may already be a member.” The anarchic nature of the Society means that membership is left open-ended and anyone may sponsor an event, though not every idea pitched garners attendance by members. Cacophony events often involve costumes and pranks in public places and sometimes going into places that are generally off limits to the public. Cacophonists have been known to regale Christmas shoppers with improved Christmas carols while dressed as Santa Claus, and later invite strippers to sit on Santa's lap (SantaCon). San Francisco chapter[edit] In 2013 a digitized collection of The San Francisco Cacophony Society's Rough Draft newsletters was uploaded to Internet Archive.[3] Los Angeles chapter[edit] The Los Angeles branch of the society listed events in their monthly newsletter, "Tales from the Zone." In 2008, The Los Angeles Cacophony Society was revived by San Francisco Cacophonist Heathervescent and Rev. Portland chapter[edit]

Go (game) Go originated in ancient China. Archaeological evidence shows that the early game was played on a board with a 17×17 grid, but by the time the game had spread to Korea and Japan, in about the 5th and 7th centuries AD respectively, boards with a 19×19 grid had become standard.[6] The first 60 moves of a Go game, animated. This particular game quickly developed into a complicated fight in the lower left and bottom. Go is an adversarial game with the objective of surrounding more territory than one's opponent.[2] As the game progresses, the board gets divided up into areas of territory, as outlined by groups of stones. The four liberties (adjacent empty points) of a single black stone (A), as White reduces those liberties by one (B, C, and D). A basic principle of Go is that stones must have at least one "liberty" (Chinese: 氣) to remain on the board. In the opening stages of the game, players typically establish positions (or "bases") in the corners and around the sides of the board.

Stranger Project on the Behance Network I started this project in 2007, my first goal when i started is to breack the usual rule of « dont speack to stranger, dont disturbe people in public space» So this is my approche at first: Questioning the modern world in which we are living and trying to break this individualism and the anonymity of the big city. By going into “Non-lieux” (no existing places) (subways, malls, and crowded streets at rush hours …;) and by talking to people to take photos, I break the usual way this modern world works for a few instants. So all my model are stanger meeting in the street, trains, subway, mails,etc. ( I look for an editor for making a Book )