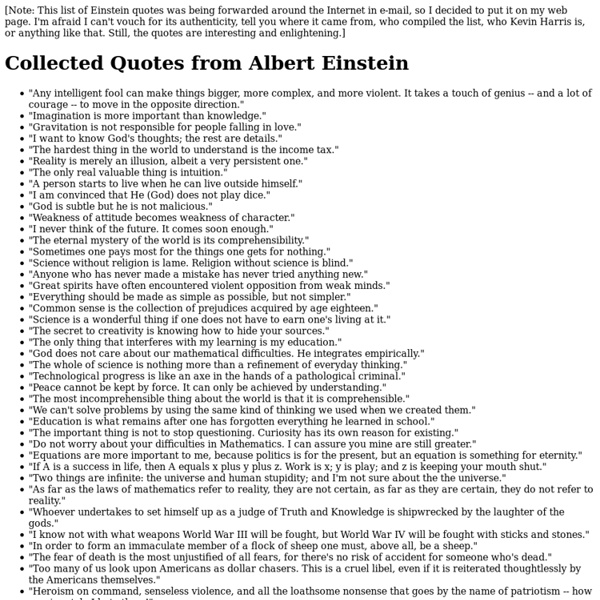 [Note: This list of Einstein quotes was being forwarded around the Internet in e-mail, so I decided to put it on my web page. I'm afraid I can't vouch for its authenticity, tell you where it came from, who compiled the list, who Kevin Harris is, or anything like that. Still, the quotes are interesting and enlightening.] "Any intelligent fool can make things bigger, more complex, and more violent. It takes a touch of genius -- and a lot of courage -- to move in the opposite direction." "Imagination is more important than knowledge." Copyright: Kevin Harris 1995 (may be freely distributed with this acknowledgement)

The Code / Fundamental Pattern - Nature appears to rely on one core recurring pattern to evolve life at every scale What are some of the ways knowledge of the pattern is being applied? Fan and Propeller Technologies Pax Scientific has patented the application of the phi spiral for translating “nature's flow efficiencies into streamlined design geometries.” The result is more efficient and effective technologies such as fans, turbines, pumps, and more.

Confucius - Chinese Philosopher Confucius, or as literally translated, Master Kong (K'ung-fu-tzu or Kongfuzi), lived and worked during what is known as the Chinese Spring and Autumn Period (770-481 BCE), and is by tradition said to have been born on the 28th of September in 551 BCE in the state of Lu located on the Shandong peninsula in northeastern China and died in 479 BCE. It is said, “by tradition” because it is difficult to distinguish much of Confucius’ life between the factual and the legendary. Confucius was an infamous Chinese thinker and educator, comparable to Socrates in the West, who developed a social and political philosophy that is often considered to be the foundation of subsequent Chinese thought. He was the founder of the Ru School of Chinese thought and the philosophical school of thought that has come to bear his name, Confucianism, comes from his tradition and the fragments that were recorded in the text called Analects (Lunyu). Do not do to others what you do not want done to yourself

Advice from Somewhere ONE. Give people more than they expect and do it cheerfully. TWO. Marry a man/woman you love to talk to. As you get older, their conversational skills will be as important as any other. Questionnaires for Writing Character Profiles - Creative Writing Help Enter your e-mail to get the e-book for FREE. We'll also keep you informed about interesting website news. "I have searched the web and used different worksheets, but none have come close to your worksheets and descriptions of (what to do and what not to do). Both courses I have taken have with Creative Writing Now have been amazing. Each time I have learned something new. ERUDITE CONCEPTS If you're not familiar with the work of Boswell D. Rabbitsmith, he's the famous erudite scientist who once said: "I woke up one morning, and all of my stuff had been stolen and replaced by exact duplicates." His mind sees things differently than most of us do, to our amazement and amusement. Here are some of his gems: (He also makes his living as a comedian by the name of Steve Wright....) 1 - I'd kill for a Nobel Peace Prize.

Cosmic Law - The Great Law of Nothingness This familiar symbol for Sunyata was made with a single brush stroke by the old zen master Shibayama. It represents a perfect circle, perfection, that is, within the limitations of the always imperfect material world. It conveys the sense of some-thing emanating from no-thing-ness. Martin Luther King, Jr. Quotes (Author of The Autobiography of Martin Luther King, Jr.) “Now there is a final reason I think that Jesus says, "Love your enemies." It is this: that love has within it a redemptive power. And there is a power there that eventually transforms individuals.

Love Quotes: The Wisest, Wittiest . . . and Most Cynical Having reviewed many 100s of quotations on the wonders--and woes--of romantic love , here are some that I think represent the very best. At the same time that many of the quotes below celebrate the many joys of romantic--almost fairy-tale--love, they typically also demonstrate great awareness of its transience, its maddening let-downs and instability. The most cynical quotations, which (I admit) are well-exemplified here, may perhaps have been written by those who loved--and lost. But win or lose, who could deny that romantic love is life's most spectacular adventure? When we're transported from living in 3-D to the awe-inspiring expansiveness of 4-D , unquestionably it's in the consciousness-altering intensity of being in love.

40 Belief-Shaking Remarks From a Ruthless Nonconformist If there’s one thing Friedrich Nietzsche did well, it’s obliterate feel-good beliefs people have about themselves. He has been criticized for being a misanthrope, a subvert, a cynic and a pessimist, but I think these assessments are off the mark. I believe he only wanted human beings to be more honest with themselves. He did have a remarkable gift for aphorism — he once declared, “It is my ambition to say in ten sentences what others say in a whole book.” A hundred years after his death, Nietzsche retains his disturbing talent for turning a person’s worldview upside-down with one jarring remark. Even today his words remain controversial. Words 1. Get specific. When you set yourself a goal, try to be as specific as possible.