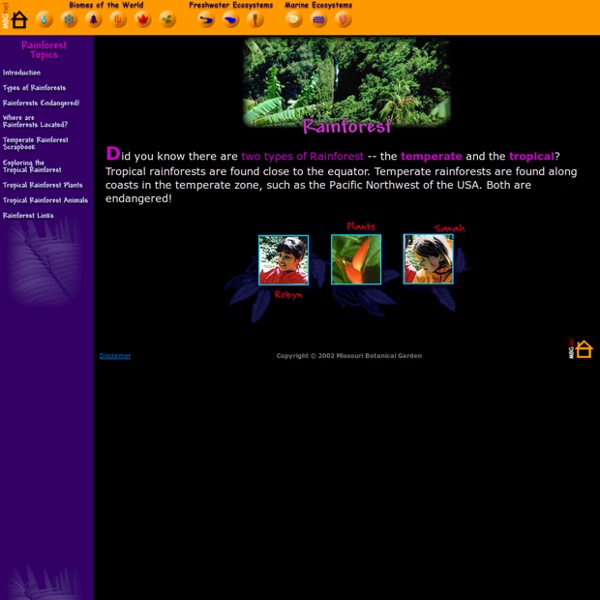 The marine biome Online exhibits : The world's biomes The marine biome Marine regions cover about three-fourths of the Earth's surface and include oceans, coral reefs, and estuaries. Marine algae supply much of the world's oxygen supply and take in a huge amount of atmospheric carbon dioxide. The evaporation of the seawater provides rainwater for the land. Oceans The largest of all the ecosystems, oceans are very large bodies of water that dominate the Earth's surface. The intertidal zone is where the ocean meets the land — sometimes it is submerged and at other times exposed, as waves and tides come in and out. The pelagic zone includes those waters further from the land, basically the open ocean. The benthic zone is the area below the pelagic zone, but does not include the very deepest parts of the ocean (see abyssal zone below). The deep ocean is the abyssal zone. Coral reefs Coral reefs are widely distributed in warm shallow waters.

rainforest picture The desert biome Online exhibits : The world's biomes The desert biome Deserts cover about one fifth of the Earth's surface and occur where rainfall is less than 50 cm/year. Although most deserts, such as the Sahara of North Africa and the deserts of the southwestern U.S., Mexico, and Australia, occur at low latitudes, another kind of desert, cold deserts, occur in the basin and range area of Utah and Nevada and in parts of western Asia. Most deserts have a considerable amount of specialized vegetation, as well as specialized vertebrate and invertebrate animals. Soils often have abundant nutrients because they need only water to become very productive and have little or no organic matter. There are relatively few large mammals in deserts because most are not capable of storing sufficient water and withstanding the heat. Desert biomes can be classified according to several characteristics. The seasons are generally warm throughout the year and very hot in the summer. Canopy in most deserts is very rare.

Definition of feature - Merriam-Webster's Student Dictionary 2 entries found for feature. To select an entry, click on it. Main Entry: 1fea·ture Pronunciation: f -ch r Function: noun1 a: the shape or appearance of the face b: a single part of the face (as the nose or the mouth)2: a part or detail that stands out3 a: the principal motion picture on a program b: a special column or section in a newspaper or magazine - fea·ture·less /-l

Australian Desert Plants Australian desert plants are clever survivors. Australia is the world’s driest inhabited continent with 70% of its landmass being deserts or semi-deserts. It is a harsh country for plants to live – it is extremely dry and it gets periods of drought that can last for years. It is extremely hot, with temperatures in 50s (°C) during the summer so if it does rain, evaporation is quick. The soils are ancient, rich in salt and extremely infertile. How can plants handle all this, and what plants are found in Australian deserts? Ausralian desert landscape, by AllPosters. Trees and Shrubs Some of the trees found in Australian deserts are the beautiful Ghost Gum (Corymbia sp.) which is almost iconic with its smooth silvery white bark; Mulga (Acacia aneura), Sandalwood (Santalum spicatum); Northern Cypress Pine (Callitris glaucophylla); Sandhill Wattle (Acacia ligulata); and Western Myall (Acacia papyrocarpa). Spinifex grass. Kangaroo Paw. Sturt’s Desert Pea. Ghost Gum. Drought.

Native animal fact sheets This page contains links to fact sheets about some well-known native animals in NSW and a few species you may not have heard of. Amphibians FrogsAustralia's diverse frog populations are in decline. Bell frogsThere are three species of bell frog in NSW. Birds Australian brush turkeyThis fascinating bird belongs to the family of megapodes. Australian magpieEver been swooped by a magpie in spring? BowerbirdsThese are thought of as the most advanced of all birds, because of the intricate display areas they weave out of twigs and other materials. EmuAustralia's largest birds come from an ancient family, seen in their primitive feathers. IbisThe graceful nature and incredible adaptation of Australia's wetland birds to the harsh environment has captivated many people. Laughing kookaburraA kookaburra's call lets other birds know of its territory. Little penguinThese flightless seabirds might seem a bit clumsy on land, but they're graceful swimmers, 'flying' through the water on their stumpy wings.