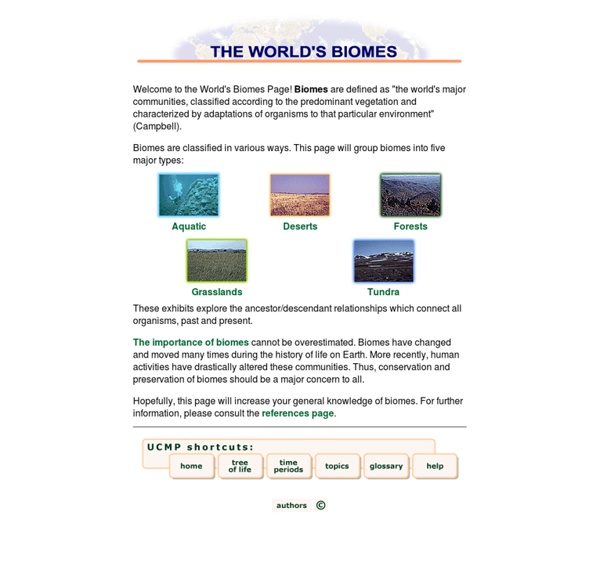 World Climates Some facts about climate The sun's rays hit the equator at a direct angle between 23 ° N and 23 ° S latitude. Radiation that reaches the atmosphere here is at its most intense. In all other cases, the rays arrive at an angle to the surface and are less intense. The closer a place is to the poles, the smaller the angle and therefore the less intense the radiation. Our climate system is based on the location of these hot and cold air-mass regions and the atmospheric circulation created by trade winds and westerlies. Trade winds north of the equator blow from the northeast. Westerlies blow from the southwest on the Northern Hemisphere and from the northwest in the Southern Hemisphere. Both westerlies and trade winds blow away from the 30 ° latitude belt. Seasons The Earth rotates about its axis, which is tilted at 23.5 degrees. As the Earth rotates on it's tilted axis around the sun, different parts of the Earth receive higher and lower levels of radiant energy.

Climate and Biomes Climate We have observed that plants require light, water, carbon dioxide, soil minerals and some reasonable temperature to survive. We have considered most of these factors and it is time to consider temperature, itself tied into all of these other factors in some way. This one environmental factor strongly determines the distribution of plants on the planet. Latitude The Equator. The Tropical Zone. To help you understand why it is warmer near the equator the diagram below shows the sunlight rays striking the earth in the tropical zone and then also at a point higher in latitude. Two SubTropic Zones. The Temperate Zones. The Polar Circles. Plants and Temperature. Plants that are sold commercially are rated according to a hardiness zone system devised by the USDA (United States Department of Agriculture). Precipitation The diagram below shows how winds and precipitation patterns form globally. Altitude The diagram below demonstrates the relationship between altitude and climate. Biomes

Blue Planet Biomes - Plants The Importance of Plants Close to 2.5 billion years ago, the earth's surface and atmosphere were stable enough to support primitive life. Single-cell organisms began to develop in the seas that covered the planet. Plants play the most important part in the cycle of nature. The oxygen we breathe comes from plants. Leaves are the main food-making part of most plants. Plant Facts Scientists believe there are over 260,000 species of plants. Certain characteristics of plants set them apart from other living things. Plants and Their Environment Plants require a reasonable level of heat to grow. A plant's environment is made up of many factors. No two natural communities are exactly alike, but many resemble one another more than they differ. Medicine Plants provide many useful drugs.

Blue Planet Biomes - Animals The First Organisms Close to 2.5 billion years ago, the earth's surface and atmosphere were stable enough to support primitive life. Single-cell organisms began to develop in the seas that covered the planet. A simple organism known as blue-green algae appeared and spread across the seas. The oxygen blue-green algae produced made it possible for other types of organisms to develop. Classification In order to study nature, scientists have classified the life forms in nature, or put them into groups. There are two main groups of animals: vertebrates and invertebrates. Organisms in the animal kingdom consist of many different species. Animal cells don't have the rigid cell walls that plant cells have. All told, around 9 or 10 million species of the kingdom Animalia inhabit the earth; the exact number isn't known. Animal Ecology A habitat is any place where a particular animal or plant species lives. All habitats on Earth are part of the biosphere. Limiting factors

What is a biome, and what are the major types on earth? What is a biome? Biomes are very large ecological areas on the earth’s surface, with fauna and flora (animals and plants) adapting to their environment. Biomes are often defined by abiotic factors such as climate, relief, geology, soils and vegetation. A biome is NOT an ecosystem, although in a way it can look like a massive ecosystem. There are five major categories of biomes on earth. Let us take a quick look at each of these biomes below: (Click Green Buttons Below) The Desert Biomes: They are the Hot and Dry Deserts, Semi Arid Deserts, Coastal Deserts and Cold Deserts. The Aquatic Biomes: Aquatic biomes are grouped into two, Freshwater Biomes (lakes and ponds, rivers and streams, wetlands) and Marine Biomes (oceans, coral reefs and estuaries). The Forest Biomes: There are three main biomes that make up Forest Biomes. The Grassland Biomes: There are two main types of grassland biomes: the Savanna Grasslands and the Temperate Grasslands.

Geographic Features | About Australia The diversity of Australia’s features are significant and for those not familiar with the scale of the country, it is easy to think of it as a relatively small island. Many international travelers visiting Australia underestimate the distances between cities and travel times. Australia is comparable in size to the continental United States. It is the world’s sixth-largest country by total area. Australia’s Big Rock – Uluru Australia is ancient and it has some of the oldest geological features in the world. The iconic image of Uluru that is so familiar in travel brochures and magazines belies the surprising shape of the rock when viewed from space. Australia’s highest mountains The highest peak on the Australian mainland is Mount Kosciuszko which is 2228 metres above sea level. It is a little-known fact that the highest point on Australian territory is in the Australian Antarctic Territory. Australia’s Longest River Australia’s Deserts Australian Islands The Land Downunder

Our natural environment Australia is the sixth largest country in the world. Its ocean territory is the world's third largest, spanning three oceans and covering around 12 million square kilometres. Nearly seven million square kilometres, or 91 per cent of Australia, is covered by native vegetation. For tens of thousands of years, the lives and sense of cultural identity of Indigenous Australians were inextricably linked to the land, its forms, flora and fauna. Australia is one of the most urbanised and coast-dwelling populations in the world. Land Australia has some of the oldest land surface on earth and while rich in biodiversity its soils and seas are among the most nutrient poor and unproductive in the world. Only six per cent of the Australian landmass is arable. Water Australia is the driest inhabited continent on earth, with the least amount of water in rivers, the lowest run-off and the smallest area of permanent wetlands of all the continents. Biodiversity Flora and fauna

Native animal fact sheets This page contains links to fact sheets about some well-known native animals in NSW and a few species you may not have heard of. Amphibians FrogsAustralia's diverse frog populations are in decline. Find out what's threatening them, and become a frog spy. Bell frogsThere are three species of bell frog in NSW. They are all similar in appearance but can be distinguished by their markings. Birds Australian brush turkeyThis fascinating bird belongs to the family of megapodes. Australian magpieEver been swooped by a magpie in spring? BowerbirdsThese are thought of as the most advanced of all birds, because of the intricate display areas they weave out of twigs and other materials. EmuAustralia's largest birds come from an ancient family, seen in their primitive feathers. IbisThe graceful nature and incredible adaptation of Australia's wetland birds to the harsh environment has captivated many people. Laughing kookaburraA kookaburra's call lets other birds know of its territory. Woodland birds

Wetlands | Biomes Focus question: What does this biome consist of? Wetlands are considered the most biologically diverse of all ecosystems because they are home to a wide range of plant and animal life. A wetland is entirely covered by water at least part of the year. Wetlands are called transition zones because they have characteristics of both dry and aquatic environments. Definition: Wetlands are areas that are covered by shallow water or where the soil is soaked with water. This makes the soil very nutritious and it contains nutrients such as sulfur, phosphorus, carbon, and nitrogen. Features: Some of the different water features of wetlands include swamps, marshes, rivers, and springs. Sometimes seawater can create wetlands, especially in coastal areas that experience strong tides. More info: Focus question: Where are the specific locations of the biome you are researching in Australia?

Australian Native Grasses for Lawn, Horse pasture - Native Seeds Do you want to save money and, at the same time, get access to the best native grasses Australia can offer? If you do, then take a look at the wide range of native grasses we have on offer. Whether you are looking for landscaping grass or pasture grass, we at Native Seeds have exactly what you need. Native grass types have proven to be more resilient than exotic grass types. They can grow easily, even on areas with poor soil health and extreme weather conditions. And with the country being prone to drought and dry weather, it makes perfect sense to choose a type of grass that can easily withstand such harsh environments. Aside from their toughness and resiliency, grasses that are native to Australia are more cost-efficient than imported or introduced types of grasses. There are many Australian grass types and each and every one of them has their unique traits and qualities that make them suitable for various applications.

Australian Desert Plants Australian desert plants are clever survivors. Australia is the world’s driest inhabited continent with 70% of its landmass being deserts or semi-deserts. It is a harsh country for plants to live – it is extremely dry and it gets periods of drought that can last for years. It is extremely hot, with temperatures in 50s (°C) during the summer so if it does rain, evaporation is quick. The soils are ancient, rich in salt and extremely infertile. Ausralian desert landscape, by AllPosters. Trees and Shrubs Some of the trees found in Australian deserts are the beautiful Ghost Gum (Corymbia sp.) which is almost iconic with its smooth silvery white bark; Mulga (Acacia aneura), Sandalwood (Santalum spicatum); Northern Cypress Pine (Callitris glaucophylla); Sandhill Wattle (Acacia ligulata); and Western Myall (Acacia papyrocarpa). Spinifex grass. Grasses and Desert Wildflowers The grasses that cover Australian deserts are hummock grasses, commonly known as Spinifex Grass. Kangaroo Paw. Ghost Gum.