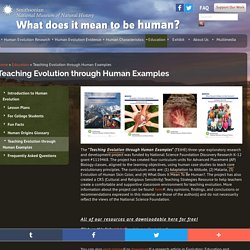 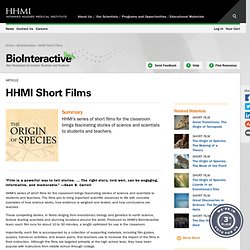 —Sean B. Carroll HHMI’s series of short films for the classroom brings fascinating stories of science and scientists to students and teachers. The films aim to bring important scientific advances to life with concrete examples of how science works, how evidence is weighed and tested, and how conclusions are reached. These compelling stories, in fields ranging from evolutionary biology and genetics to earth science, feature leading scientists and stunning locations around the world. The Endosymbiosis Theory: Evolution of Cells - Free Intro to Biology Video. Evolutionary Chimera Several mythological creatures are combinations of animals. 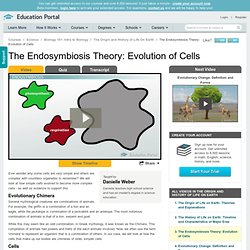 For example, the griffin is a combination of a lion and an eagle, while the jackalope is combination of a jackrabbit and an antelope. The most notorious combination of animals is that of a lion, serpent and goat. EVOLUTION - THE LINK TO OUR PAST (Documentary) History/science/Darwin. How We Got Here: An Inquiry-Based Activity About Human Evolution. Rebecca M. 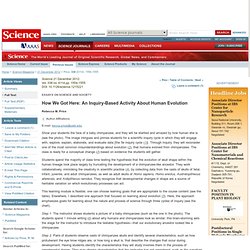 The Origin of the Species series

Origins: Series Overview. Origins: Back to the Beginning September 29, 2004 NEIL deGRASSE TYSON (Astrophysicist): A hellish, fiery wasteland, a molten planet hostile to life, yet somehow, amazingly, this is where we got our start. 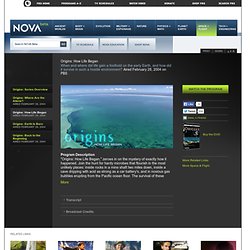 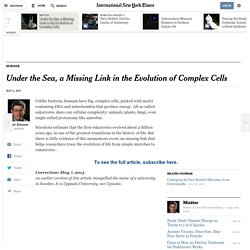 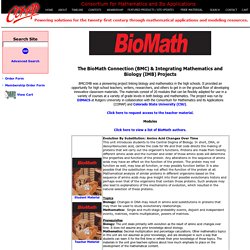 Many people crave information about those changes. As a result, new means of communicating are continually evolving. People originally relied on word of mouth. With the invention of the printer, newspapers spread information to more people, more quickly. Primary-Resource-Pack-Origins-of-Species. Selection for Tuskless Elephants. Developing an Explanation for Mouse Fur Color. Selection for Tuskless Elephants. Elephants are evolving to be tuskless after decades of poaching pressure.

Poachers hunting elephant ivory may have met their match in one of nature's greatest forces — natural selection. 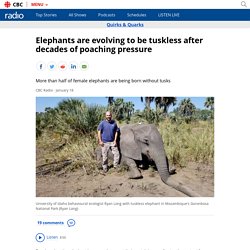 In at least two National Parks in Africa where poaching has been a huge problem, most female elephants are now born without tusks. Until the 1990's Gorongosa National Park in Mozambique was home to about 2500 elephants. But during the civil war that raged from 1972 to 1992, about 90 per cent of that population was killed.

Population Explosion. HS-LS2-1 Use mathematical and/or computational representations to support explanations of factors that affect carrying capacity of ecosystems at different scales Clarification Statement: Emphasis is on quantitative analysis and comparison of the relationships among interdependent factors including boundaries, resources, climate, and competition. 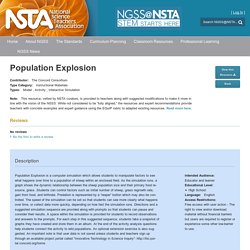 Examples of mathematical comparisons could include graphs, charts, histograms, and population changes gathered from simulations or historical data sets. Assessment Boundary: Assessment does not include deriving mathematical equations to make comparisons. This resource appears to be designed to build towards this performance expectation, though the resource developer has not explicitly stated so. BIO Quackers and Cottontails web. Neoteny: Why Disney Princesses Look Like Babies - GotScience.org. 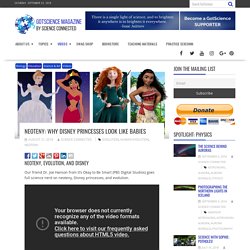 Joe Hanson from It’s Okay to Be Smart (PBS Digital Studios) goes full science nerd on neoteny, Disney princesses, and evolution. I noticed something weird about Disney Princesses lately. Naturally, I had to examine it through the lens of science. The answer led me to new knowledge about human development, the domestication and taming of animals, and why we find things cute in the first place. Twitter: @DrJoeHanson @okaytobesmart. New Nice. Climate Change and Human Impact: Extinction vs. Evolution. Comparative Reproduction. Biology Natural Selection. Biology Adaptations. HS-LS2-8 Students who demonstrate understanding can: Evaluate evidence for the role of group behavior on individual and species’ chances to survive and reproduce.

HS-LS4-4 Students who demonstrate understanding can: Construct an explanation based on evidence for how natural selection leads to adaptation of populations. HS-LS4-5 Students who demonstrate understanding can: Synthesize, communicate, and evaluate the information that describes how changes in the environmental conditions can affect the distribution of traits in a population causing: 1) increases in the number of individuals of some species, 2) the emergence of new species over time, and 3) the extinction of other species. Over the course of time, species with traits or characteristics that are better suited for them to survive in a habitat, are likely to have more success than those that have traits or characteristics that are less suited to a habitat. Introduction to the OKSci Framework. White Rhino DNA Questions. The Lone Anole. Skunk Bear - 150 years ago today, Charles Darwin published... Why do leaves have such different shapes?

There’s one thing about leaves that science has long agreed upon: They only grow so big as available water allows — but not so big that the whole plant overheats. The water part makes sense. Pink grasshopper found in marshes. An "unusual" pink grasshopper has been discovered during a wildlife event at a Devon nature reserve. The insect was found by 11-year-old Daniel Tate at Seaton Marshes near Sidmouth. He said he thought it was a flower until he saw it jump and then he realised it was a grasshopper. The insect was later identified by wildlife officers as a young adult meadow grasshopper, which has been born pink through genetic mutation.

Daniel, who attended the "mini-beasts" event with his great grandfather, said: "I was looking for grasshoppers when I saw something pink. Tst1706 31. Lice Out!! I awakened one morning with such a feeling of my hair being on fire. The flames seemed to burn from the nape of my neck to my ears. I spent all day scratching and, that night, asked my daughter to look at my scalp for a rash.

"I don't see a rash, but I think I see things moving. " Why would I have something moving in my scalp? Evolution. The mutation that helped ancient humans survive frostbite probably gave us arthritis. When humans began their slow migration out of Africa some 100,000 years ago, they carried with them the genetic seeds necessary to help survive the bitter chill of Europe and Asia. Case Study: How Did the Guppy Get His Color? This case study examines evolution in guppies as evidenced by color variation in populations.

Earth - Chicken grows face of dinosaur. Online Learning. What did T. rex taste like? Evolution – what next? Tree of Life : Exhibits : Yale Peabody Museum of Natural History. Phylogenetic trees predict the characteristics of species that have not yet been carefully studied. The Timescale of Life. J.F. Crow Institute for the Study of Evolution. Goldsmith Clade Race. Evolution. The Story of the Animal Kingdom. The Story of the Animal Kingdom. Nature's Innovations: Animals as Engineers. Lesson: evolution mini-lesson: A Step in Speciation.

The Learn.Genetics part of the site is geared to students, teachers, and the general public. It delivers educational materials on genetics, bioscience, and health topics. The homepage is divided into three main sections: Basics, New & Popular, and a section that highlights a variety of topics, from genetic technology to the new science of addiction. The site uses videos, animations, and interactives to help you explore the different topics. Going Further. Genes and Geography. Photo Credit: NASA. NGSS Bio LS 2-8 Grouping. Rare Dinosaur-Era Bird Wings Found Trapped in Amber. Two tiny wings entombed in amber reveal that plumage (the layering, patterning, coloring, and arrangement of feathers) seen in birds today already existed in at least some of their predecessors nearly a hundred million years ago. A study of the mummified wings, published in the June 28 issue of Nature Communications and funded in part by the National Geographic Society's Expeditions Council, indicated they most likely belonged to enantiornithes , a group of avian dinosaurs that became extinct at the end of the Cretaceous period.