Turks. This is a specific subject page, dealing exclusively with, or primarily with, the subject in the title. 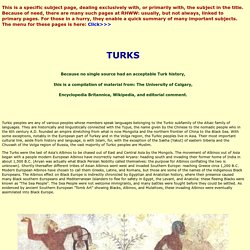 Because of need, there are many such pages at RHWW: usually, but not always, linked to primary pages. For those in a hurry, they enable a quick summary of many important subjects. The menu for these pages is here: Click>>> Because no single source had an acceptable Turk history, Gilgamesh. Gilgamesh is the semi-mythic King of Uruk in Mesopotamia best known from The Epic of Gilgamesh (written c. 2150 - 1400 BCE) the great Sumerian/Babylonian poetic work which pre-dates Homer’s writing by 1500 years and, therefore, stands as the oldest piece of epic world literature. 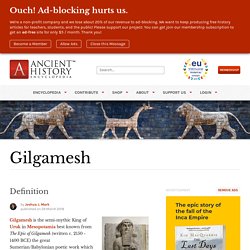 The motif of the quest for the meaning of life is first fully explored in Gilgamesh as the hero-king leaves his kingdom following the death of his best friend, Enkidu, to find the mystical figure Utnapishtim and gain eternal life. Gilgamesh's fear of death is actually a fear of meaninglessness and, although he fails to win immortality, the quest itself gives his life meaning. This theme has been explored by writers and philosophers from antiquity up to the present day. Historical & Legendary King. Discovering Ancient Egypt hieroglyphs pharaohs pyramids mummification. Michigan War Studies Review - book reviews, literature surveys, original essays, and commentary in the field of military studies. Simple Book Production. Online Courses, College Classes, & Test Prep Courses - Study.com. Spanish conquest of the Aztec Empire. Owlcation - Education. The Nationalism Project: What is Nationalism? The Middle Ages.

ThoughtCo.com is the World's Largest Education Resource. Lecture Notes: Early Indian and Chinese Civilizations. The Rise and Spread of Civilization in India and China, c. 2500 BC-AD 535 Introduction and Overview: Early Indian Civilization 1) The third of the great river valley civilizations developed along the Indus River in present-day Pakistan. 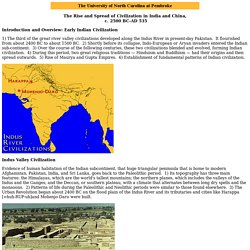 It flourished from about 2400 BC to about 1500 BC. 2) Shortly before its collapse, Indo-European or Aryan invaders entered the Indian sub-continent. 3) Over the course of the following centuries, these two civilizations blended and evolved, forming Indian civilization. 4) During this period, two great religious traditions — Hinduism and Buddhism — had their origins and then spread outwards. 5) Rise of Maurya and Gupta Empires. 6) Establishment of fundamental patterns of Indian civilization. Indus Valley Civilization. Home. 5 Minute Introduction. • What is Buddhism? 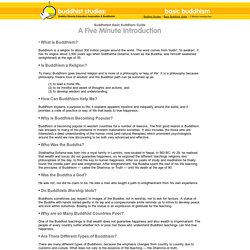 Buddhism is a religion to about 300 million people around the world. The word comes from 'budhi', 'to awaken'. It has its origins about 2,500 years ago when Siddhartha Gotama, known as the Buddha, was himself awakened (enlightened) at the age of 35. • Is Buddhism a Religion? 1320. Asia Society. About the Ancient Web. Schedule - History of Western Civilization. Near East Relief Historical Society. Documents in Law, History and Diplomacy. 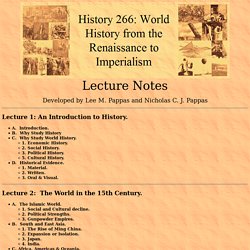 Pappas and Nicholas C. J. Pappas Lecture 1: An Introduction to History. A. Prof. John Paul Adams. Department of Modern and Classical Languages and LiteraturesCollege of Humanities OFFICE HOURS: None. 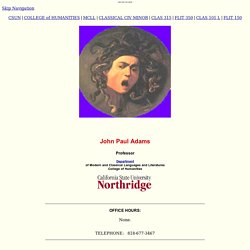 "Adding to the store of human knowledge ... is one of the noblest activities of a public University. " - Lee Bollinger, President, Columbia University "Universities should be safe havens where ruthless examination of realities will not be distorted by the aim to please or inhibited by the risk of displeasure. " - Kingman Brewster, Jr. (1919-1988) President, Yale University (1963-1977) "I've worked in an economy that rewards someone who saves lives on a battlefield with a medal, rewards a great teacher with thank-you notes, but rewards those who can make money in securities with sums reaching into the billions. 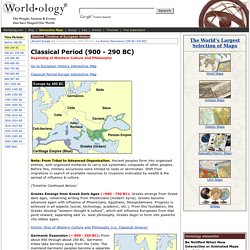 Ancient peoples form into organized entities, with organized militaries to carry out systematic conquests of other peoples. (Timeline Continued Below) Greeks Emerge from Greek Dark Ages (~900 - 750 BC): Greeks emerge from Greek dark ages, relearning writing from Phoenicians (modern Syria). Article: Rise of Western Culture and Philosophy (i.e. Germanic Expansion (~ 850 - 250 BC): From about 850 through about 250 BC, Germanic tribes take territory away from the Celts. 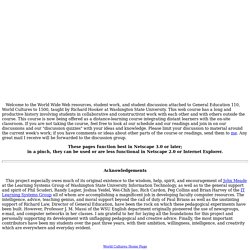 This web course has a long and productive history involving students in collaborative and constructivist work with each other and with others outside the course. This course is now being offered as a distance-learning course integrating distant learners with the on-site classroom. If you are not taking the course, feel free to look at our schedule and our readings and join in on our discussions and our "discussion quizzes" with your ideas and knowledge.

Please limit your discussion to material around the current week's work; if you have comments or ideas about other parts of the course or readings, send them to me. Any great mail I receive will be forwarded to the discussion group. Acknowledgements. World Civilizations. Animated map of history: 3000BC to 1000AD. History of Iran: Safavid Empire 1502 - 1736. The Early Middle East. Symbols of the three religions that originated in the Middle East: Judaism, Christianity, and Islam. 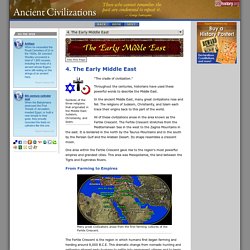 "The cradle of civilization. " Throughout the centuries, historians have used these powerful words to describe the Middle East. In the ancient Middle East, many great civilizations rose and fell. The 9,000-year-old underground megalithic settlement of Atlit Yam. Not far off the coast of the village of Atlit in the Mediterranean Sea, near Haifa in Israel, lies the submerged ruins of the ancient Neolithic site of Atlit Yam. 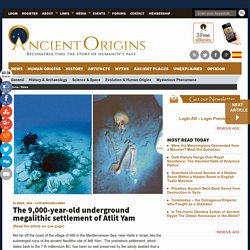 The prehistoric settlement, which dates back to the 7 th millennium BC, has been so well preserved by the sandy seabed that a mysterious stone circle still stands as it was first erected, and dozens of human skeletons lay undisturbed in their graves. Atlit Yam is one of the oldest and largest sunken settlements ever found and sheds new light on the daily lives of its ancient inhabitants. Today, Atlit Yam lies between 8 – 12 metres beneath sea level and covered an area of 40,000 square metres. At the centre of the settlement, seven megaliths (1.0 to 2.1 metres high) weighing up to 600 kilograms are arranged in a stone semicircle. The stones have cup marks carved into them and were once arranged around a freshwater spring, which suggests that they may have been used for a water ritual. What caused Atlit Yam to sink? Ancient World Alive Blog. Sakamoto Ryoma and Nakaoka Shintaro: Very Different, Yet Very Similar.

The alliance between Satsuma and Choshu, concluded in early 1866, was a turning point in the revolution. Sakamoto Ryoma’s biographers never fail to point out that the epochal event was brought about by a political outlaw who considered himself “a nobody.” While Ryoma receives so much of the historical limelight, it must not be forgotten that Nakaoka Shintaro, Ryoma’s cohort from Tosa, also played an indispensable role in bringing about the Satsuma-Choshu Alliance.

Until the alliance was concluded, Satsuma and Choshu were bitter enemies. Classroom page - History of Western Civilization, Knox. GREAT MILITARY BATTLES. At the height of the Assyrian Empire (700 BC) she possessed the most powerful army yet seen in the ancient world, and would go on to dominate the for three hundred years. Expansion began in the reign of King Ashurnasirpal II (883 – 859) BC whose campains would reveal the true military skill on which the Assyrians would conquer, their superior tactics and technology in siege warfare. In his first campaign, Ashurnasirpal captured five cities in an era when other warlords would have regarded the capture of one a successful conclusion to hostilities. Ashurnasirpal’s son Shalmaneser III (859 - 824) BC also adopted a policy of conquest. The Big Bang: Crash Course Big History #1. The Agricultural Revolution: Crash Course World History #1.

History Enthusiasts Group. Enciclopedias Virtuales. The Internet Classics Archive: 441 searchable works of classical literature. Internet History Sourcebooks. Internet Ancient History Sourcebook The Internet Ancient History Sourcebook has expanded greatly since its creation, and now contains hundred of local files as well as links to source texts throughout the net. See Introduction for an explanation of the Sourcebook's goals. See the Help! Page for all the help on research I can offer. Although I am more than happy to receive notes if you have comments on this web site, I cannot answer specific research enquiries [and - for students - I cannot, or rather will not, do your homework.]

Who were the Mongols? Around 500 BCE, a tribe of nomadic people called the Mongols lived in Asia. The Mongols were traders and herdsmen. They herded sheep and traded horses with the ancient Chinese and Persians. In the summer, they moved with their herds across the vast steppes of Asia, seeking fresh pasture land. They used dogs to help them herd the cattle. Social Studies - FREE Lesson Plans Activities Games Powerpoints Handouts - for Kids and Teachers. Encyclopedia of Philosophy. History - World Wars: The Middle East during World War One. Connections. Connections. Internet History Sourcebooks Project. This page is a subset of texts derived from the three major online Sourcebooks listed below, along with added texts and web site indicators. For more contextual information, for instance about Western imperialism, or the history of a given period, check out these web sites. The World of 1898: The Spanish-American War.

Adapa (Dan Sullivan) has constructed a more complete Sumerian-English dictionary at: (Restored! I have constructed a rudimentary Sumerian-English, English Sumerian glossary using Kramer's The Sumerians and Jacobsen's Treasures of Darkness, although parties interested in the Sumerian language may be better served at the prior two pages. note: This FAQ is partly based on an anthropology paper which I wrote in 1992, using some of the sources detailed below. Contents: I. History The Uruk period, stretched from 3800 BCE to 3200 BCE. II. Mapping History. HistoryWorld - History and Timelines.