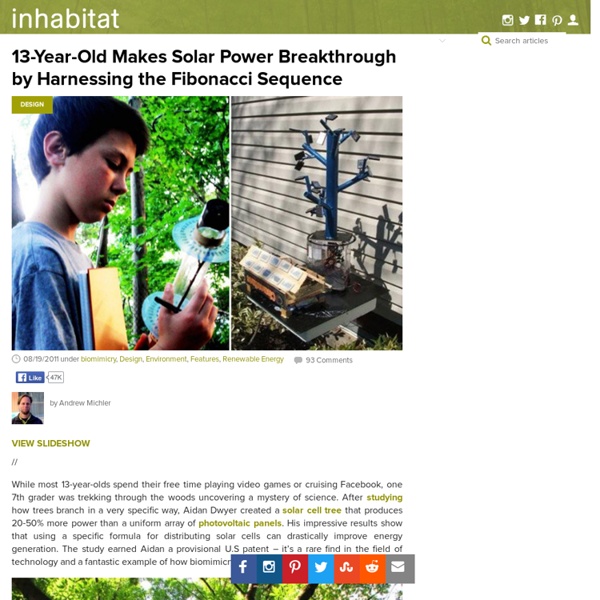 While most 13-year-olds spend their free time playing video games or cruising Facebook, one 7th grader was trekking through the woods uncovering a mystery of science. After studying how trees branch in a very specific way, Aidan Dwyer created a solar cell tree that produces 20-50% more power than a uniform array of photovoltaic panels. His impressive results show that using a specific formula for distributing solar cells can drastically improve energy generation. The study earned Aidan a provisional U.S patent – it’s a rare find in the field of technology and a fantastic example of how biomimicry can drastically improve design. Photo by Cristian Bortes Aidan Dwyer took a hike through the trees last winter and took notice of patterns in the mangle of branches. To see why they branch this way he built a small solar array using the Fibonacci formula, stepping cells at specific intervals and heights. His results did turn out to be incorrect though. Via Treehugger Related:  Climate change management (adaptation + mitigation)

Turn Steel Into Solar Panels With Photovoltaic Spray Paint No, it's not a joke or a crazy awesome futuristic concept . It's real. Tata Steel Europe (formerly Corus) and Swansea University in Wales, UK are collaborating to develop a spray-on technology that would transform steel sheets into solar panels. The technology has significant applications since it is highly efficient even in diffused sunlight. If extended, the technology can find its way to the automobile industry where photo-sensitive dyes can be applied to cars to generate electricity to split water into hydrogen and oxygen for fuel cells. Imagine the applications of such a product. The power options could be limitless. And if you think the spray-on solar technology is years away from reality, think again. The technology gains significance because the process of 'printing' these dyes on the steel sheets has already been mastered by Tata's European subsidiary Corus which is working on a new plant for the production of these steel sheets. [Photo: Jaredmoo /Flickr]

Carbon sequestration by soils: Our best shot at cooling the planet might be right under our feet | Global Development Professionals Network It’s getting hot out there. Every one of the past 14 months has broken the global temperature record. Ice cover in the Arctic sea just hit a new low, at 525,000 square miles less than normal. If we want to stay below the upper ceiling of 2 degrees, though, we still have a shot. How to make up the difference is one of the biggest questions of the 21st century. This leaves us in a bit of a bind. Soil is the second biggest reservoir of carbon on the planet, next to the oceans. As our soils degrade, they are losing their ability to hold carbon, releasing enormous plumes of CO2 [pdf] into the atmosphere. There is, however, a solution. The science on this is quite exciting. Yet despite having the evidence on their side, proponents of regenerative farming – like the international farmers’ association La Via Campesina – are fighting an uphill battle. Scientists are calling their bluff. The battle here is not just between two different methods. Ultimately, this is about more than just soil.

Heating up the Games: Why the British Isles could be the only viable Olympic hosts Only four Northern hemisphere cities are likely to be cool enough to host the summer Olympic and Paralympic Games by 2100 – Belfast, Dublin, Edinburgh and Glasgow Tropical Rio de Janeiro is in the middle of an Olympic-Paralympic Games festival of sport, with Tokyo primed to take over in 2020, and Paris, Los Angeles, and Budapest jostling over who gets to host the Games four years after that (Rome is also technically in the running but nobody expects its bid to survive much longer if the new mayor sticks to her election promises). But a warming climate suggests that sites for future Olympics will be significantly more restricted. Summary of all 645 northern hemisphere cities in 2085 capable of mounting the Summer Olympics.

Top 10 Solar Technologies to Watch Out For Solar Energy Published on October 11th, 2009 | by Derek Markham Solar power technology is moving forward by leaps and bounds, with some new advancements being built out into usable installations virtually every day. Design concepts once thought to be ‘pie in the sky’ ideas are being implemented, and making a simple solar panel array look like old-school technology. While it may be some time before you see some of these solar technologies in use, chances are it will be sooner rather than later, so keep your eyes on these: 1. 2. “The idea is to use solar panels to power the electrolyzer to produce hydrogen which would be stored in tanks. 3. 4. 5. 6. 7. 8. 9. 10. As a bonus solar technology to watch out for, CoolEarth’s solar balloons are made with metallic plastic films, with half of the balloon being transparent, which lets the sunlight in to be concentrated on a small high-efficiency solar panel. Tags: solar technology About the Author

Green-powered boat prepares for round-the-world voyage | Environment Dubbed the “Solar Impulse of the seas”, the first boat to be powered solely by renewable energies and hydrogen hopes to make its own historic trip around the world. A water-borne answer to the Solar Impulse – the plane that completed its round-the-globe trip using only solar energy in July – the Energy Observer will be powered by the sun, the wind and self-generated hydrogen when it sets sail in February as scheduled. The multi-hulled catamaran is in a shipyard at Saint Malo on France’s west coast, awaiting the installation of solar panels, wind turbines and electrolysis equipment, which breaks down water to produce its component elements, hydrogen and oxygen. “We are going to be the first boat with an autonomous means of producing hydrogen,” says Frenchman Victorien Erussard, who is behind the project – confidential until now – with compatriot Jacques Delafosse, a documentary filmmaker and professional scuba diver. The vessel itself has a storied past.

Dyeing to Boost Solar Efficiency by 50% Clean Power Published on July 14th, 2008 | by Michelle Bennett MIT has perfected a dye technology that could change the solar world as we know it. The most efficient form of solar technology today is (arguably) extreme concentrated photovoltaics, essentially solar panels placed under a magnifying glass. But the problem with these systems is heat. Concentrated sunlight can melt silicon solar panels unless you include specialized cooling systems. Thin coatings of organic dyes absorb sunlight and redirect favored wavelengths into a pane of glass. The idea is not new, but its founders in the 70s could not overcome technical challenges. “In addition, the focused light increases the electrical power obtained from each solar cell “by a factor of over 40.”" Three Reasons Why This Could Rock the Solar World: 1) It’s Easy: The technology is neither complex or difficult to manufacture. 3) It’s Coming Soon: MIT claims this technology could be ready for commercial production within three years.

Ship found in Arctic 168 years after doomed Northwest Passage attempt | World news The long-lost ship of British polar explorer Sir John Franklin, HMS Terror, has been found in pristine condition at the bottom of an Arctic bay, researchers have said, in a discovery that challenges the accepted history behind one of polar exploration’s deepest mysteries. HMS Terror and Franklin’s flagship, HMS Erebus, were abandoned in heavy sea ice far to the north of the eventual wreck site in 1848, during the Royal Navy explorer’s doomed attempt to complete the Northwest Passage. All 129 men on the Franklin expedition died, in the worst disaster to hit Britain’s Royal Navy in its long history of polar exploration. Search parties continued to look for the ships for 11 years after they disappeared, but found no trace, and the fate of the missing men remained an enigma that tantalised generations of historians, archaeologists and adventurers. Now that mystery seems to have been solved by a combination of intrepid exploration – and an improbable tip from an Inuk crewmember.

Solar goes Hyper in the U.S. As the U.S. government continues to heap billions in subsidies to the world's wealthiest coal and oil companies, the solar industry has been struggling to make it in the United States. This is sad for many reasons, not the least of which is that we're missing out on one of the biggest growth industries in the world. Currently there are 16 gigawatts of installed solar power globally. That number will grow to about 1,800 gigawatts in the next 20 years, making it one of the best job creators. U.S. engineers invented the solar panel, and the U.S. should be dominating that market. Fortunately HyperSolar, a new U.S. company, offers a ray of sunny hope on the clean energy frontier. The company does not manufacture solar panels. I saw an early prototype for such a magnifying optical layer a few years back, but the company was "dark" at the time, so I couldn't write about the innovation. Theoretically that means cutting the installation cost of a solar array in half.

Arctic Ocean shipping routes 'to open for months' Image copyright SPL Shipping routes across the Arctic are going to open up significantly this century even with a best-case reduction in CO2 emissions, a new study suggests. University of Reading, UK, researchers have investigated how the decline in sea-ice, driven by warmer temperatures, will make the region more accessible. They find that by 2050, opportunities to transit the Arctic will double for non ice-strengthened vessels. These open-water ships will even be going right over the top at times. And if CO2 emissions are not curtailed - if the aspirations of the Paris Agreement to keep global temperature rise "well below two degrees" are not implemented - then moderately ice-strengthened vessels could be routinely ploughing across the Arctic by late century for perhaps 10-12 months of the year. "The reduction in summer sea-ice, perhaps the most striking sign of climate change, may also provide economic opportunities," commented Reading's Dr Nathanael Melia. Image copyright NASA