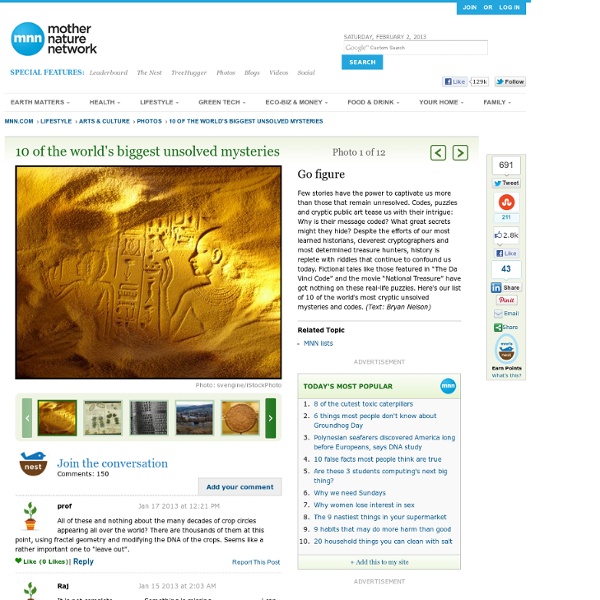 10 of the world's biggest unsolved mysteries: Voynich Manuscript Voynich Manuscript Named after the Polish-American antiquarian bookseller Wilfrid M. Voynich, who acquired it in 1912, the Voynich Manuscript is a detailed 240-page book written in a language or script that is completely unknown. Its pages are also filled with colorful drawings of strange diagrams, odd events and plants that do not seem to match any known species, adding to the intrigue of the document and the difficulty of deciphering it. Theories abound about the origin and nature of the manuscript. One thing most theorists agree on is that the book is unlikely to be a hoax, given the amount of time, money and detail that would have been required to make it.

Hot and Covered...TOKYO SKY TREE x mina perhonen "Improvement of functionality"— ©TOKYO SKY TREE Tobu Tower Sky Tree is four days, has announced the staff to wear uniforms, etc. observatory of the "Tokyo Sky Tree". Design, brand "Peruhonen Mina" is due to (Mr. Akira Minagawa designer), the same uniform is worn from the time the opening of May 22, 2012. The uniform was announced, the staff "sense and the future of innovation as a symbol of new Japan" was appointed "design represents the heart of hospitality" to have a sense of anticipation happily to the eye, a leading designer in Japan, to wear rice that was the concept of three-conscious comfort of the "Improvement of functionality." Of uniform design, the type 7 differ by type (Director, induction, information, ticket counters, shops, cleaning, induction parking lot) there is, with respect to occupations that serve both men and women, even for men and women for the design of have been published. — Director — Induction — Information — Ticket Counter — Shop

5 mind-bending facts about dreams When your head hits the pillow, for many it's lights out for the conscious part of you. But the cells firing in your brain are very much awake, sparking enough energy to produce the sometimes vivid and sometimes downright haunted dreams that take place during the rapid-eye-movement stage of your sleep. Why do some people have nightmares while others really spend their nights in bliss? Here's some of what we know about what goes on in dreamland. 1. As if nightmares weren't bad enough, a rare sleep disorder — called REM sleep behavior disorder — causes people to act out their dreams, sometimes with violent thrashes, kicks and screams. 2. Staying up late has its perks, but whimsical dreaming is not one of them. In the study 264 university students rated how often they experienced nightmares on a scale from 0 to 4, never to always, respectively. 3. As in their wake hours, men also dream about sex more than women do. 4. 5.

Rare sand cat kittens born in Israel Rotem, the zoo’s female sand cat that arrived from Germany in 2010, gave birth to the kittens about three weeks ago. “In the beginning of August, we were very happy to find two tiny kittens in the depth of the den with Rotem. On the next day the keepers already saw three and on the next one they were surprised to find a fourth one,” says Sagit Horowitz, a spokeswoman for the zoo. Rotem was paired with Sela, a male cat from Poland, as part of a European breeding program for sand cats, a species listed as “near threatened” by the International Union for Conservation of Nature. Sand cats typically give birth to an average of three kittens, and at first zoo workers were concerned that four might be a bit of an undertaking for Rotem. “We were very worried in the beginning if she could deal with four kittens. Now that the kittens are a few weeks old, they’re leaving the den and exploring their exhibit, much to the delight of visitors. Sand cats are native to both Asia and Africa.

6 Famous Unsolved Mysteries (With Really Obvious Solutions) The world is a magical place, full of mysteries science may never understand. It's also full of bullshit that people just make up to draw attention to themselves. At the heart of pretty much every "paranormal" phenomenon you find some lonely, attention-seeking soul, or several of them, willing to put a spooky little twist on an otherwise boring story. But it usually doesn't take a whole lot of examination to find the truth. For instance... The Dyatlov Pass Incident On February 2nd, 1959 , during the cold winter on Kholat Syakhl ("Mountain of the Dead") in Russia, nine intrepid ski hikers decided to do what they do best, which is ski hike, whatever the hell that is. Image courtesy of Noah Scalin It probably didn't look like this, but can you imagine? But it was the discovery of the campgrounds that added the icing to the creepy-as-fuck cake. Oh yeah, and one of the bodies was missing a tongue. "So we're agreed then: We tear up their tents, take a lady's tongue, and never tell a soul 1. 2. 3.

Change.org - Start, Join, and Win Campaigns for Change New York Mayor Calls for Restrictions on Sugary Soft Drinks Goodbye, Big Gulps. Mayor Michael Bloomberg is calling for a ban on large-sized sugary beverages from most dining establishments. The new measure would prohibit New York City delis, movie theaters, sidewalk food carts, stadiums and restaurants from selling cups or bottles containing more than 16 fluid ounces of sweetened drinks, the New York Times reports. Bloomberg’s proposal is the first of its kind in the U.S., but not the first aggressive stance he’s taken on obesity. Stefan Friedman, a spokesman for the New York City Beverage Association, told the Times that the mayor is unfairly singling out soft drinks. But the chairman of the Board of Health, Dr. “Your argument, I guess, could be that it’s a little less convenient to have to carry two 16-ounce drinks to your seat in the movie theater rather than one 32 ounce,” the mayor said.

Once, the future was spaceflight. Now it's cat videos and status updates It’s an immensely strange thing, the end of the space age. Imagine telling the vast audience who, in 1969, watched a live broadcast of Neil Armstrong stepping onto the moon that they would lose interest in the endeavour within three years. Spaceflight was the very embodiment of the future, yet the moon program came to a quiet end. Over the decades, manned spaceflight went from a defining human achievement to a very expensive niche interest. The future ain’t what it used to be. A generation ago, humans were sending ambassadors into the sky. We’re worrying about our attention spans and wondering if smartphones are addling our teenagers’ brains. The Internet is, in a not entirely appealing way, a victory of mind over matter. Information technology was envisioned in the space age, and it was meant to be yet another modern convenience. These visions of the digital future saw computers as enhanced libraries: dispassionate stores of data, content to be left in the corner when not needed.

The Mystery Casebook - Cryptids, Bigfoot, Loch Ness Monster, Chupacabra, Sea Monsters, Aliens, UFO News, Mysterious Places, Photos, Video Lance Armstrong denies new U.S. Anti-Doping Agency charges Preserving Cabrini-Green's images In the sharp sun of an April afternoon, Nate Lanthrum walks through the remains of Cabrini-Green giving away what he has taken. He looks out of place, a white guy carrying a $1,500 Nikon D700 camera, but the residents are used to him by now and greet... Blackhawks thrilled to have Brent Seabrook back Starting with Game 6 Sunday, Brent Seabrook's timeout will be over and the defenseman will be back on the ice — so long as he promises to play nice. NFL draft preview: Defensive ends As the NFL draft nears — it takes place May 8-10 — we're taking an 11-day, position-by-position look at what's out there and what the Bears need. In May 1974, Tribune delivered 2 Watergate bombshells Forty years ago this Thursday, Tribune readers found an extraordinary special section in their morning paper — a 44-page transcript of taped Oval Office conversations, the long-sought smoking gun of Watergate, perhaps the greatest political crisis... Northwestern women win at Wrigley

Top 10 Mysteries of the Mind by Jeanna Bryner, Live Science Managing Editor | October 09, 2007 01:25pm ET Credit: NIH, NIDA Much of what we don't understand about being human is simply in our heads. The brain is a befuddling organ, as are the very questions of life and death, consciousness, sleep, and much more. Here's a heads-up on what's known and what's not understood about your noggin. Author Bio Jeanna Bryner Before becoming managing editor, Jeanna served as a reporter for Live Science and SPACE.com for about three years. Jeanna Bryner on

10 More Enigmas That Defy Explanation Mysteries What is it about the bizarre and mysterious that piques our curiosity? It entertains our sense of wonder and excites our imagination, for sure. Luckily for us, history is marked with strange, logic-defying occurrences to amuse us. Here is a list comprised of 10 more unexplainable and interesting phenomenon and incidents that we crave so much. This list is made up of a mixture of two submissions to the Christmas competition which shared some items, so it seemed a good idea to combine the two to give us ten things never before shown on the site. Nature performs many astonishing feats, yet it is a different matter altogether when we human beings push past the boundaries of normal. The hospital staff did everything possible, yet the situation was dire. Iron, the king of metal, is used for just about everything from the skeleton of your house to the chains on your bike. Is it just me or doest that stain on the wall look like a person staring at you? Jamie Frater

Capricious God Violently Shakes Ant Farm Day After Bestowing Orange Slices Upon Colony APPLETON, WI—Less than 24 hours after their god bestowed two delicious orange slices upon them, local ants reported the capricious deity had picked up the entire ant farm in which they live and shaken it violently, leaving many to wonder what they had done to incur the all-powerful being's deadly wrath. "Yesterday, when we received his bountiful gift of sweet fruit, we thought we had pleased him mightily with the tireless labors of our digging," worker ant #103 said Saturday as she helped to rebuild the underground passages and chambers the vengeful god had completely decimated without warning. "But now he has laid waste to everything we, his followers, have erected to his glory. Why? Why has he done this to us?" "Must we dig in different directions, or perhaps dig even longer and more complex tunnels?" The deity, whom the ants know as "Marcus," has long been feared for his volatile and arbitrary behavior.