The 25 Biggest Mysteries of History 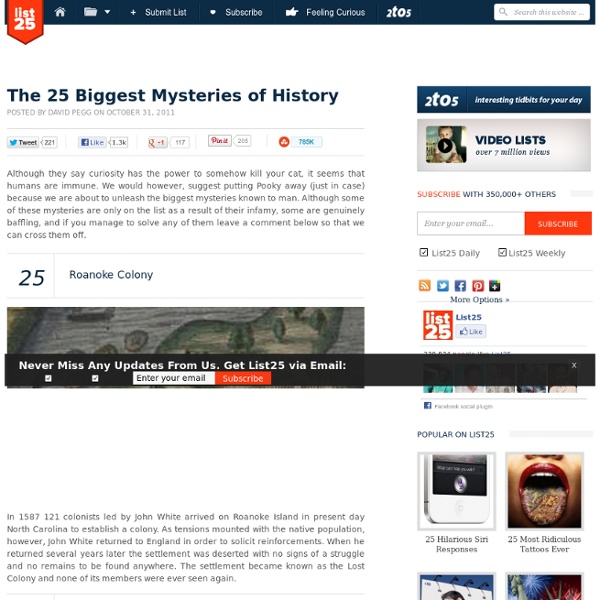 Although they say curiosity has the power to somehow kill your cat, it seems that humans are immune. We would however, suggest putting Pooky away (just in case) because we are about to unleash the biggest mysteries known to man. Although some of these mysteries are only on the list as a result of their infamy, some are genuinely baffling, and if you manage to solve any of them leave a comment below so that we can cross them off. About David Pegg After helping found the United Nations, the United States, and United Airlines, David consigned himself to a transient life of writing lists and sleeping on park benches.

Top 10 Unsolved Mysteries Mysteries This list comprises the most famous unsolved mysteries known to man that really defy rational explanation or are just outright strange. Mysteries have been a constantly popular subject on Listverse and searching for “mysteries” will give you a huge number of extra lists to satisfy your curiosity. Use the comments below to tell us what mysteries you think are missing or worthy of a mention so we can include them in future lists.

Bizarre Websites On Which You Can Kill Time With Style - Smashing Magazine - StumbleUpon Modern Web-building technologies allow designers to realize their most daring and creative ideas. Enhanced interactivity and a remarkable visual appearance can be achieved by means of such tools as Flash, JavaScript and Papervision3D, to name just a few. These strengths usually impress and entertain visitors and thus are often used for conceptual artistic presentations and promotional campaigns. In this post, you’ll find a collection of amusing websites that, by combining unconventional (and sometimes bizarre) ideas and clever JavaScript and Flash effects, will entice you to play on them for an embarrassing long time. Bizarre and Beautiful Websites Link

100-Year-Old Color Photos of Pre-Revolution Russia Have you ever wondered what Russia looked like shortly before the revolution, but aren’t satisfied with black and white photos? Well then, you owe Sergei Mikhailovich Prokudin-Gorskii a debt of thanks. While color film was still years away from development, the chemist-turned-photojournalist developed his own solution to capture the vivid colors of his native home. Using color-filtered glass plates, he photographed a scene in red, then blue, then green and then put the images together to reveal a colorized portrait. His amazing photographs, taken from 1909 to 1912 show what Russian life was like for everyone from peasants to noblemen before the country turned to communism. Don’t miss the rest of the great images seen over at Flavorwire . 90 Accomplishments of Pres. Obama Which The Media Fails to Report.... "Professor Watson writes Hi friends, I am always being asked to grade Obama's presidency. In place of offering him a grade, I put together a list of his accomplishments thus far.

11 cheap gifts guaranteed to impress science geeks Science comes up with a lot of awesome stuff, and you don't need a Ph.D, a secret lab, or government funding to get your hands on some of the coolest discoveries. We've got a list of 11 mostly affordable gifts that are guaranteed to blow your mind, whether or not you're a science geek. Click on any image to see it enlarged. 1. Aerogel 25 Greatest Unsolved Mysteries There are many unsolved mysteries in life even though science, technology, and research have come a very long way. Although we may demand a logical explanations for these mysterious things, as of now we will have to settle with mere speculations. Until these mysteries are resolved, enjoy our 25 greatest unsolved mysteries ever.

mental_floss Blog & 11 Pencil Vs. Camera Images - StumbleUpon 986 653Share10.7K Born in Abidjan, Ivory Coast and now living in Belgium, Ben Heine is an amazing artist who overlaps hand-drawn works of art with photos to create stunning images. I selected eleven of his Pencil Vs. Camera images from his site, but you should check out all his awesome work if you have time. The Truth About Christmas [NSFCWCC] (Not Safe For Christians Who Celebrate Christmas) It’s the most wonderful time of the year! The wonderful holiday season where we all come together and deck the shit out of our halls and jingle all the way. Because if you’re gonna’ jingle why half ass it? You jingle all the way damn it!

untitled The Official Rules of Strip Chess v1.1 by Ceribia with input from Keri Contents 1. Disclaimer 2. Basic System 3. Rules for Spectators 4. Special Conditions 1. 10 Laws of Productivity You might think that creatives as diverse as Internet entrepreneur Jack Dorsey, industrial design firm Studio 7.5, and bestselling Japanese novelist Haruki Murakami would have little in common. In fact, the tenets that guide how they – and exceptionally productive creatives across the board – make ideas happen are incredibly similar. Here are 10 laws of productivity we’ve consistently observed among serial idea executors: 1.

Nessie and Other Lake Monsters by Mark Chorvinsky Nearly 1000 feet deep and 24 miles long, Scotland's Loch Ness is believed by many to be home to the unidentified aquatic creature affectionately dubbed "Nessie." Since the larger public first became aware of the monster in 1933, the Loch Ness beastie has become an international media star, her most recent appearance on a commemorative stamp recently issued by the Maldive Islands. Nessie has attained the status of a classic phenomenon and her popularity endures. No other monster is as tied in with a country's image as Nessie is with Scotland. Nessie has been featured in hundreds of newspaper and magazine articles, dozens of books, and has starred or co-starred in several feature films and innumerable documentaries, including an upcoming major studio release.

Despicable Me 2 Teaser And Poster Released Universal has released the teaser poster and trailer for Despicable Me 2. Neither of the two divulge any plot details, or even has footage of the film for that matter. This is to be expected, as the film doesn’t even open until July 3, 2013. Here’s the lowdown on what the movie will be about: Facebook: April 14th 1865 Have you ever wondered what Abe Lincoln’s Facebook posts would have been like, if he used Facebook? No? Me neither, but now I know! What seems like a really silly thought is actually very funny after all.