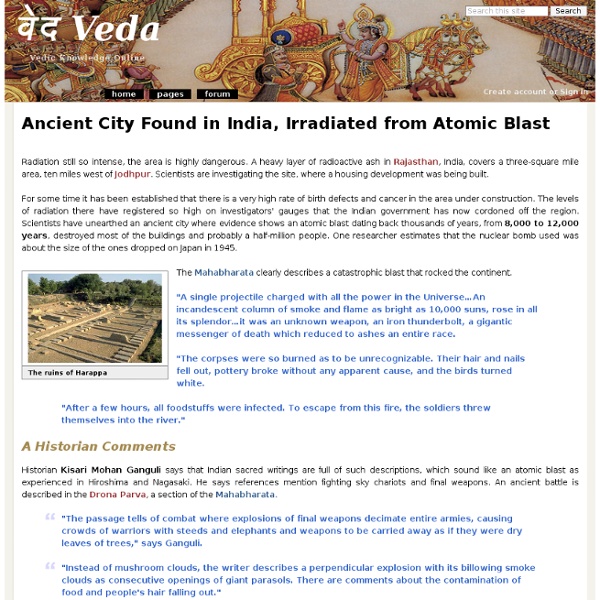 Radiation still so intense, the area is highly dangerous. A heavy layer of radioactive ash in Rajasthan, India, covers a three-square mile area, ten miles west of Jodhpur. Scientists are investigating the site, where a housing development was being built. For some time it has been established that there is a very high rate of birth defects and cancer in the area under construction. The levels of radiation there have registered so high on investigators' gauges that the Indian government has now cordoned off the region. Scientists have unearthed an ancient city where evidence shows an atomic blast dating back thousands of years, from 8,000 to 12,000 years, destroyed most of the buildings and probably a half-million people. The Mahabharata clearly describes a catastrophic blast that rocked the continent. A Historian Comments "Instead of mushroom clouds, the writer describes a perpendicular explosion with its billowing smoke clouds as consecutive openings of giant parasols. Bibliography 1.

Researchers Discover New Lineage of Ancient Human DNA from a 40,000-year-old human finger bone found in a Siberian cave points to a new lineage of ancient human, researchers report today. The find—the first made with genetic, not fossil evidence—suggests that Central Asia was occupied at that time not only by Neandertals and Homo sapiens but also by a third, previously unknown hominin lineage. "This is the most exciting discovery to come from the ancient DNA field so far," says Chris Tyler-Smith, a geneticist at the Wellcome Trust Sanger Institute in Hinxton, United Kingdom. The work complicates the human story once again, much as the discovery of the controversial H. floresiensis—a.k.a. the hobbit—has upset earlier and simpler views of early human migrations around the globe. If four early humans including the hobbit were alive about 40,000 years ago, "the amount of [human] biodiversity ... was pretty remarkable," says geneticist Sarah Tishkoff of the University of Pennsylvania.

Top 10 Civilizations That Mysteriously Disappeared Throughout our history, most civilizations have either met a slow demise or were wiped out by natural disasters or invasion. But there are a few societies whose disappearance has scholars truly stumped: 10. The Olmec One of the first Mesoamerican societies, the Olmec inhabited the tropical lowlands of south-central Mexico. The first signs of the Olmec are around 1400 BC in the city of San Lorenzo, the main Olmec settlement which was supported by two other centers, Tenochtitlan and Potrero Nuevo. Deadly time vortex appears over Antarctica Sector of erupting anomalies. Disturbing news has been leaking out from the giant continent at the bottom of the world. Some scientists manning lonely outposts under the drifting and shifting aurora are nearly paralyzed with fear. Their clipped reports are being reviewed by astonished superiors back in the home countries. Russian researchers posted near the giant South Pole sub-glacial Lake Vostok have reported eerie anomalies and incidents over the past few years that sometimes seem to border on the frayed edge of creeping madness.

There Were Giants Upon the Earth The following is excerpted from There Were Giants Upon the Earth: Gods, Demigods, and Human Ancestry: The Evidence of Alien DNA, available from Bear and Company. If you would like to learn more about this book or buy a copy, please do so here. Introduction And It Came to Pass Ancient underwater cities being found that are 10,000 years old Lost city 'could rewrite history' By BBC News Online's Tom Housden The remains of what has been described as a huge lost city may force historians and archaeologists to radically reconsider their view of ancient human history. Marine scientists say archaeological remains discovered 36 meters (120 feet) underwater in the Gulf of Cambay off the western coast of India could be over 9,000 years old. The vast city - which is five miles long and two miles wide - is believed to predate the oldest known remains in the subcontinent by more than 5,000 years.

Atlantis or Someone Else? The report is about an Earth based scenario, a combination of the possibilities inherent in a background Earth story, some possible hypotheses by me, and then some visual evidence to add into the mix. It will be up to you to decide if there is any merit. First we'll start with the background story. In more modern times, the story of ancient Atlantis has fascinated generations and some to obsession as a real place. As many of you may know, it is acknowledged that the story of Atlantis was first introduced into public awareness via dialogues by the Greek philosopher Plato around 355–360 BC. Lost World under the North Sea It also serves as a warning for the scale of impact that climate change can cause, Professor Gaffney says. Human communities would have lost their homelands as the rising water began to encroach upon the wide, low-lying plains. "At times this change would have been insidious and slow - but at times, it could have been terrifyingly fast.