Archeological Discoveries in Africa & the Middle & Near East

Hiding in plain sight: Massive monument discovered at Petra by modern day Indiana Jones. Walls of Benin. The Walls of Benin were a combination of ramparts and moats, called Iya in the local language, used as a defense of the defunct Kingdom of Benin, which is present-day Benin City, the capital of present-day Edo, Nigeria. 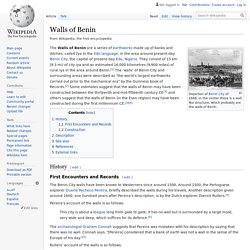 It was considered the largest man-made structure lengthwise and was hailed as the largest earthwork in the world. It is larger than Sungbo's Eredo. [citation needed] It enclosed 2,510 sq. miles (6,500 km²) of community lands. Its length was over 9,900 miles (16,000 km). It was estimated that earliest construction began in 800 and continued into the mid-15th century. Description[edit] Sungbo's Eredo. Sungbo's Eredo is a rampart or system of walls and ditches that is located to the south-west of the Yoruba town of Ijebu-Ode in Ogun state, southwest Nigeria ( WikiMiniAtlas Description[edit] Total length of fortifications is more than 160 kilometres (99 mi). 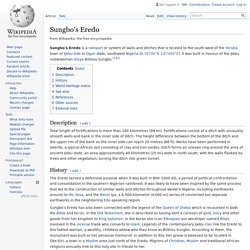 Biblical text revealed from damaged scroll, 1,500 years old. For the first time, advanced technologies made it possible to read parts of a scroll that is at least 1,500 years old, which was excavated in 1970 but at some point earlier had been badly burned. 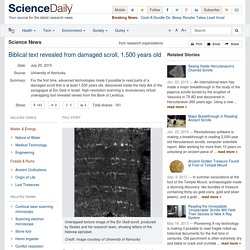 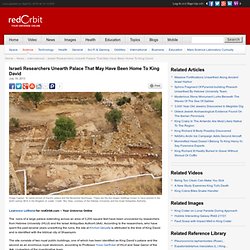 These are the two largest buildings known to have existed in the tenth century BCE in the Kingdom of Judah. Credit: Sky View, courtesy of the Hebrew University and the Israel Antiquities Authority. Lawrence LeBlond for redOrbit.com – Your Universe Online The ruins of a large palace extending across an area of 3,200 square feet have been uncovered by researchers from Hebrew University (HUJI) and the Israel Antiquities Authorit (IAA). World's oldest port believed to have been found in Egypt alongside papyri revealing fascinating details of life of Ancient Egyptians.

Port found on Red Sea coast and is believed to date back 4,500 yearsOnce 'one of the most important commercial ports of ancient Egypt'Sheets of precious papyri also offer insight into daily life in Ancient Egypt By Amanda Williams Published: 15:48 GMT, 16 April 2013 | Updated: 18:01 GMT, 16 April 2013 Archaeologists have stumbled upon what is thought to be the world's oldest port. 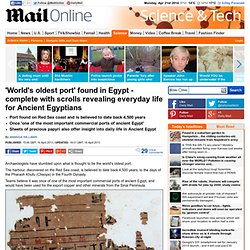 The pyramids of Sudan: Archaeologists find reveals links between ancient Egypt and the bygone African kingdom of Kush. By Daniel Miller Published: 18:17 GMT, 7 February 2013 | Updated: 10:06 GMT, 8 February 2013 Archaeologists excavating a site in Sudan have discovered 35 pyramids revealing fascinating links between the bygone Kingdom of Kush that once existed there and ancient Egypt. 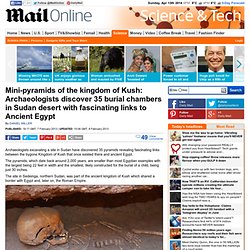 Researchers test replica big toes from 950BC - and confirm 'world's first prosthetics' worked. Disabled volunteers tested replicas of Egyptian false toes - and found them good enough for daily useTests push back the age of prosthetics by 400 yearsPrevious oldest prosthetic - from Roman times - was destroyed in bombing raids over London in WWII By Eddie Wrenn. 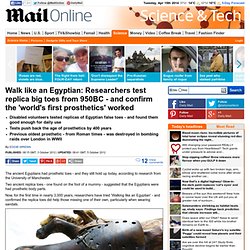 Prehistoric dairy farmers grazed herds of cows over seven thousand years ago - in the SAHARA DESERT. By Daily Mail Reporter Published: 09:04 GMT, 21 June 2012 | Updated: 09:04 GMT, 21 June 2012 Prehistoric farmers were keeping cows for their milk seven millenia ago in what is now the Sahara desert, researchers say British scientists have found microscopic stains of dairy products on cooking pots from Libya dating back to the fifth millennium BC. 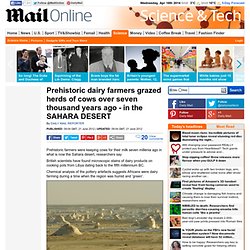 Chemical analysis of the pottery artefacts suggests Africans were dairy farming during a time when the region was humid and 'green'. Oldest artist's workshop in the world discovered - life - 13 October 2011. Grind up some ochre, melt some bone-marrow fat, mix the lot with a splash of urine – and paint your body with it. 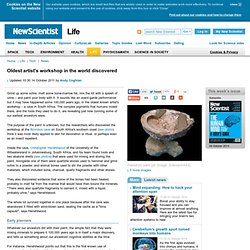 It sounds like an avant-garde performance but it may have happened some 100,000 years ago, in the oldest known artist's workshop – a cave in South Africa. The complex pigments that humans mixed there, and the tools they used to do it, are revealing just how cunning some of our earliest ancestors were. The purpose of the paint is unknown, but the researchers who discovered the workshop at the Blombos cave on South Africa's southern coast (see photo) think it was most likely applied to skin for decoration or ritual, or perhaps even as an insect repellent. Inside the cave, Christopher Henshilwood of the University of the Witwatersrand in Johannesburg, South Africa, and his team found tools and two abalone shells (see photos) that were used for mixing and storing the paint. Early planners Art or body art? Could the paint have been used for murals rather than as body paint? 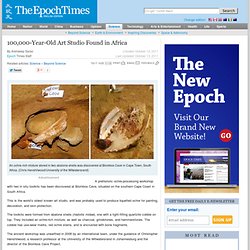 (Chris Henshilwood/University of the Witwatersrand) A prehistoric ochre-processing workshop with two in situ toolkits has been discovered at Blombos Cave, situated on the southern Cape Coast in South Africa. This is the world’s oldest known art studio, and was probably used to produce liquefied ochre for painting, decoration, and skin protection. The toolkits were formed from abalone shells (Haliotis midae), one with a tight-fitting quartzite cobble on top.