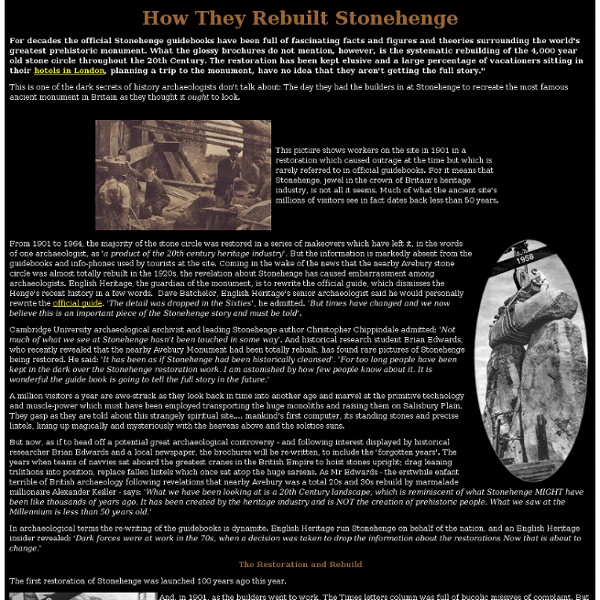 How They Rebuilt Stonehenge For decades the official Stonehenge guidebooks have been full of fascinating facts and figures and theories surrounding the world's greatest prehistoric monument. What the glossy brochures do not mention, however, is the systematic rebuilding of the 4,000 year old stone circle throughout the 20th Century. The restoration has been kept elusive and a large percentage of vacationers sitting in their hotels in London, planning a trip to the monument, have no idea that they aren't getting the full story." This is one of the dark secrets of history archaeologists don't talk about: The day they had the builders in at Stonehenge to recreate the most famous ancient monument in Britain as they thought it ought to look. From 1901 to 1964, the majority of the stone circle was restored in a series of makeovers which have left it, in the words of one archaeologist, as 'a product of the 20th century heritage industry'. The Restoration and Rebuild Related:  History

Benedict XVI (Pontifex) It's Official: Stonehenge Stones Were Moved 160 Miles Some of the volcanic bluestones in the inner ring of Stonehenge officially match an outcrop in Wales that's 160 miles (257 kilometers) from the world-famous site, geologists announced this week. (See Wales pictures.) The discovery leaves two big ideas standing about how the massive pieces of the monument arrived at Salisbury Plain: entirely by human hand, or partly by glacier. As it looks today, 5,000-year-old Stonehenge has an outer ring of 20- to 30-ton sandstone blocks and an inner ring and horseshoe of 3- to 5-ton volcanic bluestone blocks. (See Stonehenge pictures.) The monument's larger outer blocks, called the Sarsen stones, were likely quarried some 20 to 30 miles (32 to 48 kilometers) away in what's now England, where sandstone is a common material. The origin of the bluestones, however, has weighed heavy on the hearts of archaeologists. (Also see "Stonehenge Built With Balls?") Stonehenge Source Near Sheep Farm (Related: "Stonehenge 'Hedge' Found, Shielded Secret Rituals?")

Taman Sari Water Palace, Yogyakarta: Sultan wants a wife Sultan wants a wife This is the website of travel writer, Michael Turtle. After working in broadcast journalism for a decade in Australia, Michael left Sydney to travel the world indefinitely and write about his discoveries. Taman Sari Water Palace, Yogyakarta “The sultans had two hobbies”, the guide is explaining. “They hunt for four-legged…”, he pauses. It’s to investigate this second type of hunting – the one that certainly sounds more salacious – that I’m on my way to the Royal Water Palace (Taman Sari) in Yogyakarta. The Keraton is still in use, as Yogyakarta still has a Sultan who acts automatically as the region’s governor. As I arrive, I can see that it has fallen slightly into disrepair. In the main part of the palace, through the entrance gardens and down the steps beyond a large wall offering privacy, is the pool. It was here the hunted would play, not unwittingly. High in the tower at one end of the pool, the hunter would play. This was a great honour, though.

Exposing the Shadow "Elite" Controlling the World So who really controls the world? The Illuminati? Freemasons? The Bilderberg Group? So who really controls the world? by Jimmy Mengel The answer, like most topics worth exploring, is not quite so simple. But it really may not be as secretive as you would think. But don't take my word for it, we have both science and insider testimony to back it up. We are going to break this down into three categories: Financial, Political and Media. Financial Elite Thanks to the science of complex system theory, the answer may actually be right in front of our faces. This scientific process sheds light on the dark corners of bank control and international finance and pulls some of the major players out from the shadows. From a massive database of 37 million companies, Glattfelder pulled out the 43,060 transnational corporations (companies that operate in more than one country) that are all connected by their shareholders. See the globe chart bellow: The size of the dot represents revenue. From New Scientist:

Tony Newman: The Beginning of the End of the Drug War: Top Stories of 2012 This year will go down in history as the the beginning of the end to America's longest failed war: the war on drugs. Voters in Colorado and Washington made worldwide news by legalizing marijuana, Presidents around Latin America spoke out passionately against the drug war, and award-winning movies documented the horrors of the drug war and gave voice to those seeking change. Below are some of top stories of 2012 that capture the momentum and give us hope that we can and will find an exit strategy to the disastrous war on drugs. Colorado and Washington Make History By Legalizing Marijuana Washington State and Colorado made history on Election Day by becoming the first two states in the country -- and the first political jurisdictions anywhere in the world -- to approve the legal regulation of marijuana. California Votes to Reform Draconian "Three Strikes" Mandatory Minimum Law Latin American Presidents "Break the Taboo" and Call for End to Drug War Caravan of Mexican and U.S.

What Happens to Your Facebook Account When You Die? In 2005, college student Loren Williams was killed in a motorcycle accident. His grieving mother, yearning to feel closer to her son, wanted to use his Facebook page. More than just seeing the site, she wanted to see his correspondence, to read his messages, in hopes of understanding her son better. A 25-year-old federal law, however, barred her from accessing his account. See also: Digital media has evolved at breakneck speed, giving lawmakers little time to catch up. The 1986 Electronic Communications Privacy Act prevents disclosing stored communications unless there’s a court order. Facebook refused Williams’ mother, Karen, access to his account and even changed the password when Karen got it from a friend. License Expired When you sign up for a website, you are agreeing to terms of license, so any “assets” under that license fall under licensing rules, says Florida-based estate planning lawyer David Goldman. Attorney David Goldman Digital Death Attorney Wendy S.

Allegory of the Cave Plato realizes that the general run of humankind can think, and speak, etc., without (so far as they acknowledge) any awareness of his realm of Forms. The allegory of the cave is supposed to explain this. In the allegory, Plato likens people untutored in the Theory of Forms to prisoners chained in a cave, unable to turn their heads. All they can see is the wall of the cave. Behind them burns a fire. Between the fire and the prisoners there is a parapet, along which puppeteers can walk. From Great Dialogues of Plato (Warmington and Rouse, eds.) Here are some students’ illustrations of Plato’s Cave Go back to lecture on the Phaedo Go back to lecture on the “One Over Many” Argument Go to next lecture on Criticism of Forms Need a quick review of the Theory of Forms? Return to the PHIL 320 Home Page Copyright © 2006, S.

North Korea Rocket Launch: Long-Range Missile Fired, South Korean Defense Ministry Confirms By Jack Kim and Mayumi Negishi SEOUL/TOKYO, Dec 12 (Reuters) - North Korea successfully launched a rocket on Wednesday, boosting the credentials of its new leader and stepping up the threat the isolated and impoverished state poses to its opponents. The rocket, which North Korea says put a weather satellite into orbit, has been labelled by the United States, South Korea and Japan as a test of technology that could one day deliver a nuclear warhead capable of hitting targets as far as the continental United States. "The satellite has entered the planned orbit," a North Korean television news-reader clad in traditional Korean garb triumphantly announced, after which the station played patriotic songs with the lyrics "Chosun (Korea) does what it says". The rocket was launched just before 10 a.m. The North American Aerospace Defense Command (NORAD) said that it "deployed an object that appeared to achieve orbit", the first time an independent body has verified North Korean claims.

Kim Jong Un voted Time’s Person of the Year by readers | The Lookout (Time) Kim Jong Un is Time's 2012 Person of the Year. That is, according to the magazine's online readers, who chose the North Korean leader over the likes of President Barack Obama, Olympic gold medalist Gabrielle Douglas, New Jersey Gov. It doesn't mean Kim will be named Time's official Person of the Year when the choice is revealed on the "Today" show on Dec. 19—that honor is decided by the editors. "While we don't make our selection based on the poll results," Time executive editor Radhika Jones noted in the blog post that announced the winners, "it's always interesting to see where some of our preferred candidates end up." As has been the case in previous years, users of 4chan, an Internet forum, launched a campaign to manipulate the poll, pushing North Korea's supreme leader to the top of the list, according to the magazine. Stewart came in second with 2.4 million votes. [Related: Obama no lock for Time's Person of the Year, panel says]

Pre-Adamic man: were there human beings on Earth before Adam? | Vol 24 | Creation Magazine stock.xchng: hisks & Flickr: wayfaring stranger by Russell Grigg Could there have been human creatures, commonly called ‘pre-Adamites’, living on Earth before God created Adam? Many readers, no doubt, will think this a foolish question, but it is, in fact, the belief of many evangelicals. And leading ‘progressive creationist’ Hugh Ross teaches something similar when he says that ‘bipedal, tool-using, large-brained primates roamed Earth for hundreds of thousands (perhaps a million) years’.1 Ross does not believe in biological evolution, although he accepts cosmic and geologic evolution and the evolutionary timescale. Why did they ‘become extinct’? This is a classic example of the confusion that Christians get themselves into when they depart from the text of the Bible and allow outside influences, especially long-age naturalism, to dictate the meaning of Scripture. Pre-Adamism has a long history Pre-Adamism became the scientific justification for slavery and a defence for racism.