Archeological Discoveries in the Americas

Star pupil finds lost Mayan city by studying ancient charts of the night sky from his bedroom. Have we found the resting place of Aztec rulers? Mexican tunnel that leads to sealed chambers could contain ancient royalty. The Aztecs are thought to have cremated the remains of their leaders during their 1325-1521 rule. 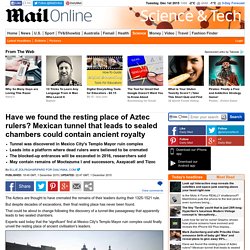 But despite decades of excavations, their final resting place has never been found. That could be about to change following the discovery of a tunnel-like passageway that apparently leads to two sealed chambers. Experts said today that the 'significant' find at Mexico City's Templo Mayor ruin complex could finally unveil the resting place of ancient civilisation's leaders. Mexican archaeologists have discovered, at the archaeological site, a long tunnel leading into the center of a circular platform where Aztec rulers were believed to be cremated.

The Aztecs are believed to have cremated the remains of their leaders during their 1325-1521 rule, but the final resting has never been found A National Institute of Anthropology and History team, led by archaeologist Leonardo Lopez Lujan, discovered the 8.4-meter (27-foot) long tunnel. Mexico finds 'main' skull rack at Aztec temple complex. Archaeologists have found the main trophy rack of sacrificed human skulls at Mexico City's Templo Mayor Aztec ruin site. 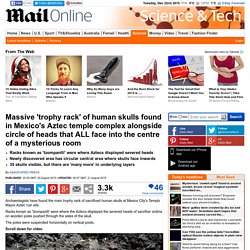 Racks known as 'tzompantli' were where the Aztecs displayed the severed heads of sacrifice victims on wooden poles pushed through the sides of the skull. The poles were suspended horizontally on vertical posts. Scroll down for video All the skulls were arranged to look inward toward the center of the circle, but experts don't know what was at the center. In a typical ritual, sacrificial victims would be taken to the top of the temple where four priests would lay them down on a stone slab. The victim's abdomen would be sliced open by a fifth priest using a ceremonial flint knife to cut right through the diaphragm and split open the chest.

The priest would grab the heart and tear it out, still beating. Religion has been causing conflicts for more than 2,000 years: Rather than binding ancient societies together, belief systems may have torn them apart in Mesoamerica. Many wars in recent years have been fought in the name of various religions, and it now appears the conflict caused by such beliefs was also raging as far back as 700BC. 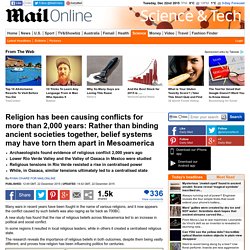 A new study has found that the rise of religious beliefs across Mesoamerica led to an increase in political and social conflict. In some regions it resulted in local religious leaders, while in others it created a centralised religious state. The research reveals the importance of religious beliefs in both outcomes, despite them being vastly different, and proves how religion has been influencing politics for centuries. Archaeologists have found that religion was important in the formation and history of early cities and states, such as the Mayan city of Teotihuacan (pictured), but the shift in religious power from local to a central region would have led to religious-based social and political conflict Mesoamerica gave rise to numerous advanced early cultures during its history. 10,000-year-old remains of settlements are unearthed in Bolivia - making it the oldest archaeological site in the Amazon.

Drugged with beer and cocaine and left to freeze to death, 500-year-old mummies of sacrificed Inca children reveal their secrets. Archaeologists discover traces of coca leaves and beer in Incan mummies The mummies of the three children were discovered in 1999 in ArgentinaThey are the best naturally preserved group of mummies found so far By Fiona Macrae Published: 18:03 GMT, 29 July 2013 | Updated: 07:35 GMT, 30 July 2013 Her body is so perfectly preserved that it is hard to believe this girl died more than 500 years ago. 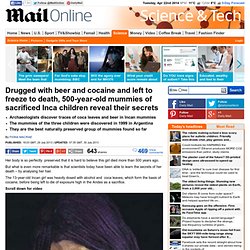 But what is even more remarkable is that scientists today have been able to learn the secrets of her death – by analysing her hair. Treasures of the Peruvian royal tombs: Archaeologists find first unlooted tomb of the ancient Wari civilisation where three queens were buried alongside golden jewellery and human sacrifices. Wari empire ruled the Andes before their better-known Incan successorsTomb was a lucky find at the site which has long been targeted by raidersIt provides a wealth of new information about the enigmatic civilisationRemains found alongside mummies believed to be human sacrifices By Daniel Miller. 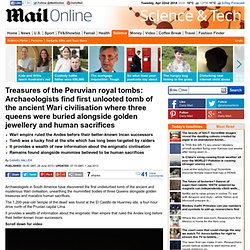 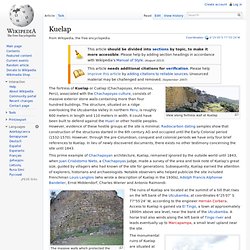 The structure, situated on a ridge overlooking the Utcubamba Valley in northern Peru, is roughly 600 meters in length and 110 meters in width. It could have been built to defend against the Huari or other hostile peoples. However, evidence of these hostile groups at the site is minimal. Radiocarbon dating samples show that construction of the structures started in the 6th century AD and occupied until the Early Colonial period (1532-1570). This prime example of Chachapoyan architecture, Kuelap, remained ignored by the outside world until 1843, when Juan Crisóstomo Nieto, a Chachapoyas judge, made a survey of the area and took note of Kuelap's great size, guided by villagers who had known of the site for generations. Grave of ancient king who laid foundations for Mayan civilisation in 700 B.C. discovered by archaeologists. Amazing discovery at the Tak'alik Ab'aj dig in Retalhuleu, western GuatemalaKing K'utz Chman was a priest who reigned around 700 B.C., experts sayOldest royal Mayan burial ground ever found and it's packed with jade jewels By Mark Duell Published: 00:59 GMT, 26 October 2012 | Updated: 00:59 GMT, 26 October 2012 This is the extraordinary grave of an ancient king credited with laying the foundations for the Mayan civilisation more than 2,000 years ago, which has been discovered by archaeologists in Guatemala. 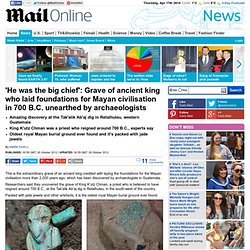 Guatemalan family doing refurbishments discover Mayan murals that haven't been seen in CENTURIES. By Daily Mail Reporter Published: 01:40 GMT, 13 September 2012 | Updated: 19:02 GMT, 13 September 2012 A family in Guatemala was simply looking to renovate their home, hoping to get a different look than what they were used to. 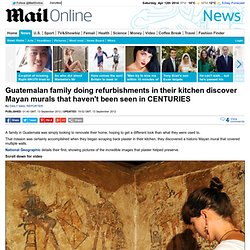 That mission was certainly accomplished when they began scraping back plaster in their kitchen, they discovered a historic Mayan mural that covered multiple walls. National Geographic details their find, showing pictures of the incredible images that plaster helped preserve. Scroll down for video. The first cuppa? researchers find native Americans brewed tea almost a thousand years ago. Also known as 'black drink', it was six times more potent than coffeeMade from toasted holly leaves and stems By Mark Prigg Published: 09:30 GMT, 7 August 2012 | Updated: 13:40 GMT, 7 August 2012 Native Americans were brewing a primitive form of tea almost a thousand years ago, scientists have discovered. 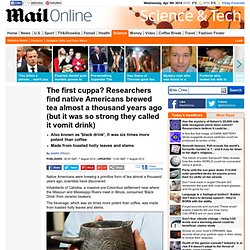 Inhabitants of Cahokia, a massive pre-Columbus settlement near where the Missouri and Mississippi Rivers meet in Illinois, consumed ‘Black Drink’ from ceramic beakers. The beverage, which was six times more potent than coffee, was made from toasted holly leaves and stems. The 1,300 year old Mayan prince found in his tomb surrounded by lavish gifts. By Mark Prigg Published: 11:54 GMT, 31 July 2012 | Updated: 16:39 GMT, 31 July 2012 A 1,300-year-old Mayan prince has been discovered in an ancient tomb along with lavish burial offerings. 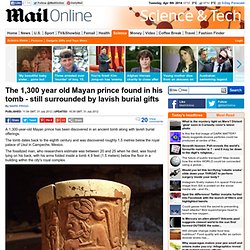 The tomb dates back to the eighth century and was discovered roughly 1.5 metres below the royal palace of Uxul in Campeche, Mexico. The fossilized man, who researchers estimate was between 20 and 25 when he died, was found lying on his back, with his arms folded inside a tomb 4.9 feet (1.5 meters) below the floor in a building within the city's royal complex. A ceramic cup from the newly discovered Mayan prince's tomb, found 1.5 metres below the royal palace of Uxul in Campeche, Mexico. Archaeologists find 2,500-year-old chocolate spread. By Rebecca Seales Published: 12:45 GMT, 3 August 2012 | Updated: 11:41 GMT, 6 August 2012 It's a discovery to challenge even the most ardent cocoa addict: Archaeologists have found traces of chocolate thought to be 2,500 years old. The choc of ages was discovered on a plate in the Yucatan peninsula, the first time chocolate residue has been found on a plate rather than a cup.

The find suggests chocolate may have been used as a condiment or sauce with solid food, as well as for drinking. Second inscription confirming 'end date' of Mayan calendar in 2012 is found in Guatemala. Second inscription that confirms date of 'end' of Mayan calendar'End date' marks end of 5,125-year-old cycle of time1,300 year old carvings described as biggest hieroglyphic find in decadesInscription found on blocks abandoned by looters By Rob Waugh Published: 08:31 GMT, 29 June 2012 | Updated: 14:30 GMT, 29 June 2012 Marcello A.

Canuto, director of Tulane's Middle American Research Institute, examines hieroglyphics at the La Corona dig site in Guatemala. Mexican experts find ancient blood on stone knives. Associated Press= MEXICO CITY (AP) — Traces of blood and fragments of muscle, tendon, skin and hair found on 2,000-year-old stone knives have given researchers the first conclusive evidence that the obsidian blades were used for human sacrifice so long ago in Mexico. The Mayans reveal their darkest mysteries: New excavation reveals secrets of the Mayan calendar - including black-clad figures and symbols never seen before. Wall covered in calculations relating to Mayan calendarLine-up of men in black uniformsAstrological calculations not fully understoodDates seem to stretch 7,000 years into FUTUREContradicts 'doomsday' predictions about 2012First paintings found on walls in Mayan dwellingsHuge city in Guatemala finally reveals its secrets By Rob Waugh Published: 18:04 GMT, 10 May 2012 | Updated: 10:46 GMT, 11 May 2012 A vast city built by the ancient Mayan civilisation and discovered nearly a century ago in modern day Guatemala is finally starting to yield its secrets - including a hint that apocalyptic predictions around the 'end' of the Mayan Calendar may be wrong.

Excavating for the first time in the sprawling complex of Xultzn in Guatemala's Peten region, archaeologists have uncovered a structure that contains what appears to be a work space for the town's scribe. Scroll down for video: Angelyn Bass cleans and stabilizes the surface of a wall of a Maya house that dates to the 9th century A.D. Scientists resurrect microbe used to ferment alcohol in ancient Indian burial ritual. By Ted Thornhill Updated: 12:20 GMT, 22 February 2012 Yeasts that had lain dormant for over 1,300 years in an Andean tomb have been kick-started back to life - and revealed as an entirely new species. 6,700-year-old popcorn found in Peru. By Amy Oliver Created: 12:36 GMT, 19 January 2012 Want dust with that? Archaeologists found corncobs, husks, stalks and tassels dating back 3,000 to 6,700 to 3,000 years along the Peruvian coast Taste wise it probably isn't up to much after nearly 7,000 years.

But the discovery of an ancient form of popcorn along the Peruvian coast has got archaeologists excited none the less. Corncobs, husks, stalks and tassels dating back 3,000 to 6,700 years were found at Paredones and Huaca Prieta - two mound sites the country's northern coast. Corn microfossils were also discovered at the sites by the research team from Vanderbilt University, Tennessee, and Peru's Academia Nacional de la Historia. A-9000-year-old-hunting-cabin-underwater.html?WT.mc_id=D-E-OTB-AD-INYT-HP-OS-0514&WT.mc_ev=click&bicmp=AD&bicmlukp=WT.