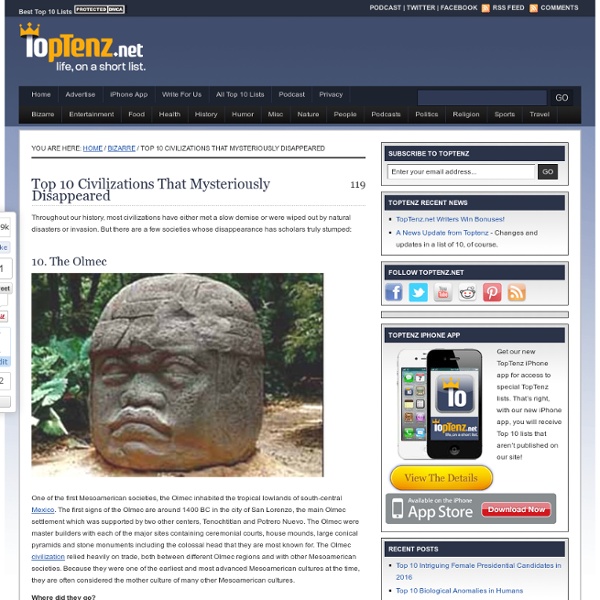 Throughout our history, most civilizations have either met a slow demise or were wiped out by natural disasters or invasion. But there are a few societies whose disappearance has scholars truly stumped: 10. The Olmec One of the first Mesoamerican societies, the Olmec inhabited the tropical lowlands of south-central Mexico. The first signs of the Olmec are around 1400 BC in the city of San Lorenzo, the main Olmec settlement which was supported by two other centers, Tenochtitlan and Potrero Nuevo. Where did they go? Around 400 BC the eastern half of the Olmec’s lands was depopulated- possibly due to environmental changes. 9. The Nabateans were a Semitic culture that inhabited parts of Jordan, Canaan and Arabia from around the sixth century BC. During the fourth century AD, the Nabateans abandoned Petra and no one really knows why. 8. The Aksumite Empire began in the first century AD in what is now Ethiopia and is believed to be the home of the Queen of Sheba. 7.The Mycenaeans 6. 4. 1.

Petra Petra (Arabic: البتراء, Al-Batrāʾ, Ancient Greek Πέτρα) is a historical and archaeological city in the southern Jordanian governorate of Ma'an that is famous for its rock-cut architecture and water conduit system. Another name for Petra is the Rose City due to the color of the stone out of which it is carved. The site remained unknown to the Western world until 1812, when it was introduced by Swiss explorer Johann Ludwig Burckhardt. Ancient underwater cities being found that are 10,000 years old Lost city 'could rewrite history' By BBC News Online's Tom Housden The remains of what has been described as a huge lost city may force historians and archaeologists to radically reconsider their view of ancient human history. Marine scientists say archaeological remains discovered 36 meters (120 feet) underwater in the Gulf of Cambay off the western coast of India could be over 9,000 years old.

Top 10 Unexplained Mysterious Disappearances in History It is a fact that literally thousands of people disappear or go missing every year in this country alone; some of these are likely well-covered up homicides, but most are voluntary—either teenage runaways or people who just want to start over again—with a few as yet undiscovered suicides thrown in for good measure. However, there are a few mysterious disappearances that remain inexplicable or have so captured the public imagination that they continue to intrigue us to this day. Here is my listing of the top ten most mysterious and unexplained disappearances over the years that continue to baffle investigators to this day.

10 Mind-Blowing Theories That Will Change Your Perception of the World Reality is not as obvious and simple as we like to think. Some of the things that we accept as true at face value are notoriously wrong. Scientists and philosophers have made every effort to change our common perceptions of it. The 10 examples below will show you what I mean. Lascaux Cave painting of a dun horse (equine) at Lascaux Modern entrance to the Lascaux cave Lascaux (Lascaux Caves) (English /læsˈkoʊ/,[1] French: [lasko][2]) is the setting of a complex of caves in southwestern France famous for its Paleolithic cave paintings. The original caves are located near the village of Montignac, in the department of Dordogne. They contain some of the best-known Upper Paleolithic art. These paintings are estimated to be 17,300 years old.[3][4] They primarily consist of images of large animals, most of which are known from fossil evidence to have lived in the area at the time.

Ancient City Found in India, Irradiated from Atomic Blast Radiation still so intense, the area is highly dangerous. A heavy layer of radioactive ash in Rajasthan, India, covers a three-square mile area, ten miles west of Jodhpur. Scientists are investigating the site, where a housing development was being built. Top 10 Most Important Historical Finds For as long as there have been civilizations on earth, man has been curious about his ancestors. Our need to connect to our past fuels the study of anthropology and the many important sites and artifacts uncovered through archaeology have opened our eyes to the lives of those that came before us. 10. Qin Shi Huang’s Terracotta Army A farmer in Xi’an named Yang was drilling for water when he found the Terracotta Army in 1947. The Army was carved by 700,000 forced workers and was buried underground in front of the tomb of Qin Shi Huang so they could protect him in the afterlife.

UFOs and Aliens in Ancient Art Posted by theghostdiaries on Wednesday, November 14, 2012 · 1 Comment The earliest depictions of ancient aliens and UFOs are those carved on a mountain in Hunan, China. They are said to be dated 47,000 years old, which puts them in the time span of the Neanderthal man, predating Homo-sapiens. These paintings seem to suggest early encounters with unknown beings and, perhaps, visitations from extraterrestrials. The further back you go in time, the harder these art pieces become to interpret. 31 Architectural Wonders of the Ancient World Have you ever wondered what unknown stories might lie behind the relics of ancient civilizations? Here are 31 of the most impressive—and yet often still mysterious—architectural wonders from the distant past. They include the Seven Wonders of the Ancient World, the Egyptian Labyrinth, Easter Island, and more. I've also posted the fascinating tales behind a few of these monuments. It all comes from the Amazeing Art: Wonders of the Ancient World book, which contains 31 mazes and essays. I've posted some of the mazes here too, so just follow the little red arrows (

Swedish divers unearth a 'Stone Age Atlantis': 11,000-year-old ancient settlement discovered under the Baltic Sea Divers found a harpoon, tools, horns and the bones of ancient cattle The bones belonged to the animal auroch last seen in the early 1600sArchaeologists believe these relics date back to the Stone AgeIt is said to be the oldest settlement in the area - dubbed Sweden’s 'Atlantis' By Victoria Woollaston Published: 16:06 GMT, 27 January 2014 | Updated: 17:16 GMT, 27 January 2014