Ancient wooden statue found in Russia is older than Egypt's pyramids. In 1894, Russian gold miners stumbled upon an unusual wooden object in the Shigir peat bog 62 miles north of Yekaterinburg. 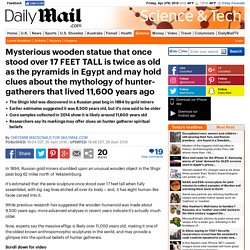 It’s estimated that the eerie sculpture once stood over 17 feet tall when fully assembled, with zig-zag lines etched all over its body – and, it has eight human-like faces carved into it. While previous research has suggested the wooden humanoid was made about 9,500 years ago, more advanced analyses in recent years indicate it’s actually much older. Now, experts say the massive effigy is likely over 11,000 years old, making it one of the oldest known anthropomorphic sculptures in the world, and may provide a glimpse into the spiritual beliefs of hunter gatherers. Scroll down for video It’s more than twice as old as Egypt’s famous pyramids, yet remarkably, much of the wooden sculpture has survived the years. Remains of medieval kitchen discovered in Suffolk. The remains of a medieval kitchen where cooks may have prepared meals for hungry pilgrims, has been discovered in Suffolk. 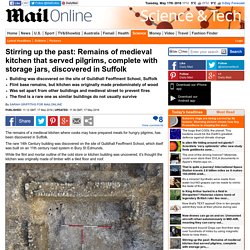 The rare 14th Century building was discovered on the site of Guildhall Feoffment School, which itself was built on an 11th century road system in Bury St Edmunds. Israeli divers find largest trove of Roman shipwreck treasure in decades. Scientists find 16,000-year-old fossilised pollen in mystery tomb. Grave is the first burial of its kind found in the Iberian peninsulaLady's identity and why she was buried in elaborate tomb are unknownPlacing flowers may have been a ritual for locals to honour the Red LadyThe flowers could equally have been placed their to cover up bad smells By Victoria Woollaston and Ellie Zolfagharifard For Dailymail.com Published: 21:46 GMT, 8 May 2015 | Updated: 22:50 GMT, 8 May 2015 Scientists are beginning to unravel the secrets of the 'Red Lady of El Mirón' who was buried deep within a cave on the Iberian peninsula 19,000 years ago. 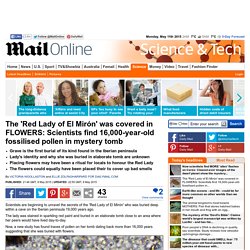 The lady was stained in sparkling red paint and buried in an elaborate tomb close to an area where her peers would have lived day-to-day. Now, a new study has found traces of pollen on her tomb dating back more than 16,000 years suggesting that she was buried with flowers. Oldest toy 'ever found' in Europe is 3,500-year-old bronze and silver stork. Thracian bronze artefact takes the form of a stork with a gemstone eyeIt's head is moveable, allowing children to have let it ‘drink’ waterToy was discovered by locals in Zlatograd in Rhodope Mountains, BulgariaExperts believe it may have had religious links in the Late Bronze Age By Sarah Griffiths for MailOnline Published: 12:53 GMT, 11 May 2015 | Updated: 14:22 GMT, 11 May 2015 At first glance, it may look like a strange sculpture or even a mangled piece of piping, but this unique object is claimed to be the oldest toy in Europe. 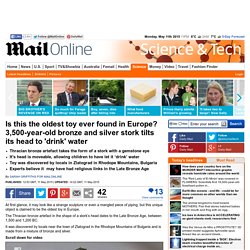 Proof that women have ALWAYS loved jewellery: Skull from 1550BC goes on display with elaborate bronze headband. Female skeleton was discovered in Rochlitz, south of Halle, east Germany, while construction work was underway on a new rail track The skeleton - thought to date back to between 1550 and 1250 BC - was found to be wearing an elaborate headband made of tiny bronze spirals. 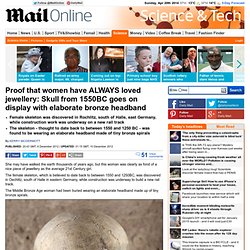 That's going to be one stinky variety! Traces of ancient cheese show the foodstuff dates back at least 7,000 years. Earliest cheeses dating back to 5000BC found in Polish region of KuyaviaScientists found traces by analysing fatty acids found in unglazed pottery By Lewis Smith Published: 18:27 GMT, 12 December 2012 | Updated: 08:57 GMT, 14 December 2012 Assortment of cheeses: A new study shows the art of cheese making dates back at least 7,000 years to Poland. 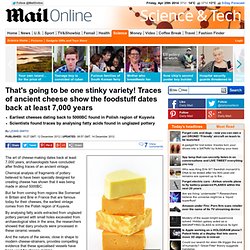 The first carpenters? 7,000 year old German water wells reveal earliest known use of wood for construction. Tests revealed that the wood comes from massive old oak trees felled by early Neolithic farmers with stone axes between the years of 5206 and 5098 BCThe wells were excavated at settlements in the Greater Leipzig region and are the oldest known timber constructions in the worldWood could also hold clues to environmental conditions at the time By Mark Prigg. 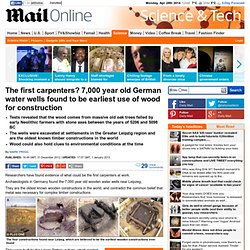 The not-so-Dark Ages: Mummified head from 1200AD reveals enlightened doctors were dissecting human bodies centuries earlier than previously thought. Scientists have found the oldest preserved human dissection in EuropeRadiocarbon dating suggests the head and shoulders are from 1200ADHead so well preserved it retained a red beard By Emma Innes Published: 16:56 GMT, 6 March 2013 | Updated: 17:16 GMT, 6 March 2013 Scientists have found what they believe to be the oldest preserved human dissection in Europe. 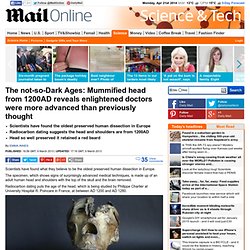 The specimen, which shows signs of surprisingly advanced medical techniques, is made up of an adult human head and shoulders with the top of the skull and the brain removed. Radiocarbon dating puts the age of the head, which is being studied by Philippe Charlier at University Hospital R. Scientists have found what they believe to be the oldest preserved human dissection in Europe The researchers used medical scanners to create a 3D model of them, allowing them to see inside and analyse the methods used to preserve it The head’s arteries are filled with a ‘metal wax’ compound made up of beeswax, lime and cinnabar mercury. Iron Age helmet used to hold human remains following a cremation among rare finds unearthed by Britain's amateur treasure hunters.

Recent finds announced by experts from the British Museum in LondonIron Age helmet unearthed by metal-detectorist near Canterbury, KentA boar mount also found that could have belonged to Richard IIIViking hoard among the other treasures unearthed over the past year By Damien Gayle Published: 14:35 GMT, 3 December 2012 | Updated: 09:28 GMT, 4 December 2012 An 'extremely rare' Iron Age helmet that was later used as a vessel to hold human remains following a cremation has been discovered. 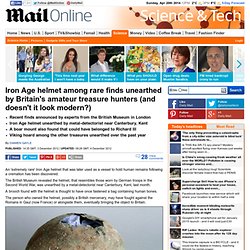 The British Museum revealed the helmet, that resembles those worn by German troops in the Second World War, was unearthed by a metal-detectorist near Canterbury, Kent, last month. A brooch found with the helmet is thought to have once fastened a bag containing human bones. The person who owned the helmet, possibly a British mercenary, may have fought against the Romans in Gaul (now France) or alongside them, eventually bringing the object to Britain. Spoil of war? Alepotrypa: Incredible cave which experts believe inspired the Greek legend of Hades. The cave - named Alepotrypa - dates back to the Neolithic Age but laid undiscovered in southern Greece until the 1950sArchaeologists have uncovered tools, pottery, obsidian, silver and copper artifactsFindings suggest cave dwellers might have connected the cave with Hades By Suzannah Hills Published: 16:32 GMT, 29 November 2012 | Updated: 07:44 GMT, 30 November 2012 An ancient Greek cave nearly the size of four football pitches and with its own underground lake may be responsible for sparking the age-old myth about the Greek underworld god Hades, archaeologists claim. 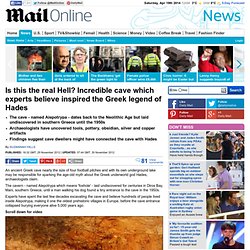 The cavern - named Alepotrypa which means 'foxhole' - laid undiscovered for centuries in Diros Bay, Mani, southern Greece, until a man walking his dog found a tiny entrance to the cave in the 1950s. Scroll down for video To the depths of hell: It has been suggested that this cave called Alepotrypa might have helped serve as the inspiration for the mythic ancient Greek underworld god Hades. Archaeologists unearth Scotland's oldest, 10,000 year-old, home. Ancient dwelling was found in the path of the new Forth bridgeExperts believe remains were from a turf house that would have belonged to first settlers in Scotland Charred bone fragments and hazelnuts found at site By Claire Bates. A golden discovery: Bulgarian archaelogists discover astonishing artifacts linked to Alexander the Great in vast network of tombs.

Beautifully-preserved treasures found in Bulgarian historical siteThracian artefacts are more than 2,000 years oldMay be linked to Phillip II of Macedon, Alexander the Great's father By Sam Webb. Huge ancient Pagan hall unearthed at Lyminge, Kent. The foundations were found under a village green at Lyminge, KentThe 69 feet by 28 feet structure had room for at least 60 peopleA rare piece of horse harness and jewellery were also found By Alex Ward Published: 02:18 GMT, 31 October 2012 | Updated: 16:43 GMT, 31 October 2012 The foundations of a huge Anglo-Saxon feasting hall, the first to be discovered in more than 30 years, has been found below a village green in Kent.

The newly discovered ancient settlement, thought to date back to 4700BC, is near the Bulgarian town of Provadia, about 25 miles from the country's Black Sea coast. Archaeology professor Vassil Nikolov led the dig which focused on the town itself and its necropolis, where the strange and complex burial rituals were discovered.

Foundations of meeting house at least 50ft long found in MonmouthDiscovery was made as builders worked on a new housing estate By Graham Smith. Deepest Roman shipwrecks found near Greece - and prove that ancient seafarers were more adventurous than thought. Wreck and pottery found 0.9 miles down between Corfu and ItalyAncient merchants didn't 'hug the shore' but sailed across seaFound by survey for Greek-Italian gas pipeline By Rob Waugh. 'Black magic' of ancient curse revealed after Roman tablet found hidden in museum. Snake-haired figure called to 'bind' victimBlack-magic tablet calls down curse on specific man - PorcellusMay contain depiction of goddess thought of as 'mother of witches'Tablets lost in Bologna archives for more than a century.