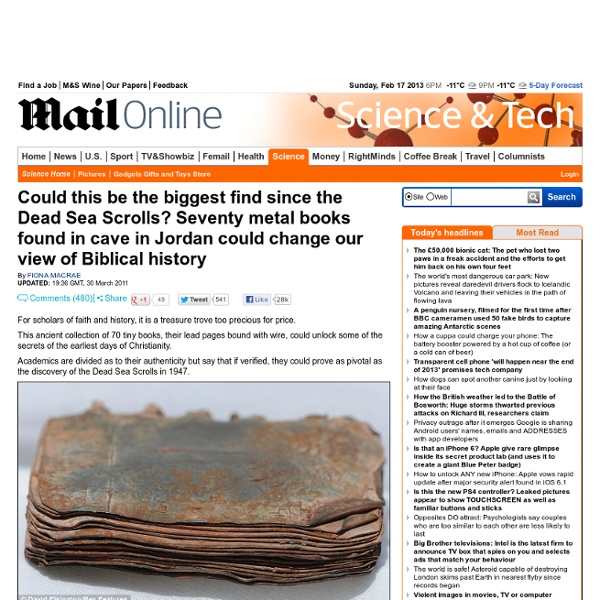 By Fiona Macrae Updated: 19:36 GMT, 30 March 2011 For scholars of faith and history, it is a treasure trove too precious for price. This ancient collection of 70 tiny books, their lead pages bound with wire, could unlock some of the secrets of the earliest days of Christianity. Academics are divided as to their authenticity but say that if verified, they could prove as pivotal as the discovery of the Dead Sea Scrolls in 1947. Lines of inquiry: The metal tablets could change our understanding of the Bible On pages not much bigger than a credit card, are images, symbols and words that appear to refer to the Messiah and, possibly even, to the Crucifixion and Resurrection. Adding to the intrigue, many of the books are sealed, prompting academics to speculate they are actually the lost collection of codices mentioned in the Bible’s Book Of Revelation. Initial metallurgical tests indicate that some of the books could date from the first century AD. A 16th century painting depicting Jesus's death. Related:  Mysteries/History/Discoveries

150,000-Year-Old Pipes Baffle Scientists In China: Out Of Place In Time? The universe is full of mysteries that challenge our current knowledge. In "Beyond Science" Epoch Times collects stories about these strange phenomena to stimulate the imagination and open up previously undreamed of possibilities. Are they true? You decide. Oopart (out of place artifact) is a term applied to dozens of prehistoric objects found in various places around the world that seem to show a level of technological advancement incongruous with the times in which they were made. In a mysterious pyramid in China’s Qinghai Province near Mount Baigong are three caves filled with pipes leading to a nearby salt-water lake. Dating done by the Beijing Institute of Geology determined these iron pipes were smelted about 150,000 years ago, if they were indeed made by humans, according to Brian Dunning of Skeptoid.com. And if they were made by humans, history as it is commonly viewed would have to be reevaluated. The pipes lead into a salty lake, though a twin lake nearby contains freshwater.

1,600-Year-Old Goblet Shows that the Romans Used Nanotechnology The Lycurgus Cup, as it is known due to its depiction of a scene involving King Lycurgus of Thrace, is a 1,600-year-old jade green Roman chalice that changes colour depending on the direction of the light upon it. It baffled scientists ever since the glass chalice was acquired by the British Museum in the 1950s. They could not work out why the cup appeared jade green when lit from the front but blood red when lit from behind. The mystery was solved in 1990, when researchers in England scrutinized broken fragments under a microscope and discovered that the Roman artisans were nanotechnology pioneers: They had impregnated the glass with particles of silver and gold, ground down until they were as small as 50 nanometres in diameter, less than one-thousandth the size of a grain of table salt. The work was so precise that there is no way that the resulting effect was an accident. This is not the first time that Roman technology has exceeded that of our modern day. By April Holloway

'Britain's Atlantis' found at bottom of North sea - swamped by a tsunami 5,500 years ago Divers have found traces of ancient land swallowed by waves 8500 years agoDoggerland once stretched from Scotland to DenmarkRivers seen underwater by seismic scansBritain was not an island - and area under North Sea was roamed by mammoths and other giant animalsDescribed as the 'real heartland' of EuropeHad population of tens of thousands - but devastated by sea level rises By Rob Waugh Published: 23:32 GMT, 2 July 2012 | Updated: 10:49 GMT, 3 July 2012 'Britain's Atlantis' - a hidden underwater world swallowed by the North Sea - has been discovered by divers working with science teams from the University of St Andrews. Doggerland, a huge area of dry land that stretched from Scotland to Denmark was slowly submerged by water between 18,000 BC and 5,500 BC. Divers from oil companies have found remains of a 'drowned world' with a population of tens of thousands - which might once have been the 'real heartland' of Europe. A Greater Britain: How the North Sea grew and the land-mass shrunk

Makthar, Tunisia - مكثر، تونس The Crazy Things The Bible Says About The Apocalypse If you've ever read through the Christian Bible and made it all the way to the end, you know it contains a book called The Book of Revelation. It was written by a man who only referred to himself as "John," and it contains some absolutely freaky things within. Many people believe that this book predicts what the coming apocalypse will look like. The story it tells is a little more than scary... The First Trumpet After the first trumpet of the apocalypse sounds, it will trigger a domino effect. The Second Trumpet After the second angel blows his trumpet, a giant pillar of fire will fall from the sky, killing all animals living in the waters. The Third Trumpet After the third trumpet sounds, a giant star will come down and hit Earth, poisoning the waters and rivers so that humanity can't drink from them anymore. The Fourth Trumpet When the fourth trumpet sounds, darkness will fall over the sky, thus making our days much much shorter. The Fifth Trumpet The Sixth Trumpet The Seventh Trumpet

2,000-year-old ritual bath found in Jerusalem Archaeologists in Jerusalem say they've found a 2,000-year-old ritual bath with a sophisticated system to keep water pure, Israel's Antiquities Authority (IAA) announced. The bath, known as a miqwe or mikveh, was found at a site in southwest Jerusalem's Kiryat Menachem quarter, and researchers say it had a unique water supply system. The miqwe collected rainwater from three basins, which were cut into the roof of the bath, and sent water into an underground immersion chamber through channels, explained IAA excavation director Benyamin Storchan. Storchan said in a statement that this system was more complex than that of other baths of the same time period, which typically had a small rock-cut pool nearby that supplied rainwater to the underground chamber. The bath was associated with a settlement of the Second Temple period, and it apparently got a new life as a quarry after it went out of use. Excavations at the site were taking place ahead of the construction of a new road.

The Most Bizarre Candies That Actually Exist Everyone loves candy! (Well, maybe not too much candy. And certainly not this candy.) Instead of being appetizing to every sweet tooth, these confections are just, well, confusing. Who thought these were a good idea? Who eats them? 1. A tube of black sugar sounds gross enough, but why not go the extra mile and pretend it's someone's bodily remains? 2. I don't even know what to say about this. 3. Not only do you have to pretend to eat sh*t, but you're stuck with a pooping plastic bear forever afterwards. 4. Someone thought encouraging children to dip lollipops in toilets and then lick them was a good idea. 5. If Swedish fish are too normal for you, you can feast on fish guts and bones instead. 6. Even the word chum is gross. 7. This is the worst thing ever. 8. Japan, seriously. 9. Nothing freshens your breath or brightens your smile like a ball of meat. 10. Well, it is known as "junk" food. 11. It's chocolate covered espresso beans, which is fine. 12. What has to be wrong with you to buy this?

Domus de Janas Domus de Janas (Sardinian: "House of the Fairies" or of the "Witches") are a type of pre-historic chamber tombs found in Sardinia. They consist of several chambers quarried out by the Ozieri and Beaker cultures, resembling houses in their layout. Built between 3400 and 2700 BC, more than 1000 of the rock-cut tombs are known on the island. The shape of grottoes can vary from that of a rounded hut with conical or triangular ceiling. See also[edit] Enchanted Moura References[edit] Domus de Janas on the Atlas Obscura. Gallery[edit] Interior of a Domus de JanasPrehistoric complex of Sant'Andrea Priu - Sardinia