China's top 10 archaeological finds of 2016. Tomb mystery: is this the grave of an Emperor? In Photos: Stunning Discoveries at Angkor Wat. Archaeologists have made several stunning discoveries at the 12th-century temple called Angkor Wat in Cambodia. 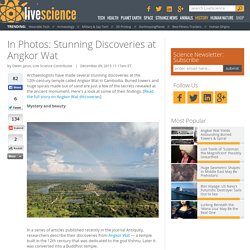 Buried towers and huge spirals made out of sand are just a few of the secrets revealed at the ancient monument. Here's a look at some of their findings. [Read the full story on Angkor Wat discoveries] Mystery and beauty. Angkor Wat was surrounded by a 1-mile long 'mysterious structure', researchers find. Sprawling structures forming the shape of a giant spiral and an ensemble of buried towers have been dug up from the grounds of Angkor Wat, spurring new mysteries about the ancient temple. 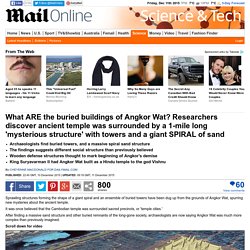 It was once believed that the Cambodian temple was surrounded sacred precincts, or 'temple cities.' After finding a massive sand structure and other buried remnants of the long-gone society, archaeologists are now saying Angkor Wat was much more complex than previously imagined. Scroll down for video Using laser airborne scanning (LiDAR) technology and ground penetrating radar, researchers were able to map the locations of eight buried towers found on the grounds of Angkor Wat. 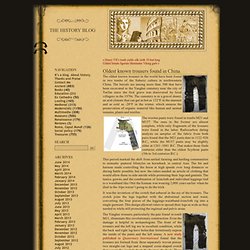 The burials are among more than 500 that have been excavated in the Yanghai cemetery near the city of Turfan since the first grave was discovered by local villagers in the 1970s. The cemetery is in a gravel desert, an arid climate that can get as hot as 122°F in the summer and as cold as -20°F in the winter, which ensures the preservation of organic material like human and animal remains, plants and textiles.

The woolen pants were found in tombs M21 and M157. The ones in the former are almost complete, while only fragments of the trousers were found in the latter. Radiocarbon dating analysis on samples of the fabric from both pairs found that the M21 pants date to 1122-926 B.C., while the M157 pants may be slightly older at 1261–1041 B.C. Prehistoric pornography: Chinese carvings show explicit copulation. Courtesy of Jeannine Davis-Kimball.

Prudes shouldn’t go into archeology. The patina of antiquity may make a carved ivory phallus, Venus figurine, or vulva painting on a cave wall priceless, communicating to us from a mute, distant past. But transplant those images to the modern world and you get dildos, Playboy, and Georgia O’Keefe. Is this the world's first pornography? The incredibly explicit images carved in north-west China 4,000 years ago. The Kangjiashimenji Petroglyphs depict of an intense fertility ritualUniquely for the ancient world, they explicitly show a wild orgyThey are thought to date back to the second century BC By Damien Gayle Published: 14:56 GMT, 19 February 2013 | Updated: 15:10 GMT, 20 February 2013 These remarkable images show some of the earliest known examples of what we these days might dub pornography.

The Kangjiashimenji Petroglyphs, in Xinjiang, north-west China, depict an intense fertility ritual the likes of which is almost unique in the ancient world. Archaeologists baffled by eight-ton, 2,000-year-old 'panda statue' discovered at Chinese excavation site. Ten-foot long statue is 4ft wide, 5ft 7in tall and shaped like an animalDiscovered in China's Sichuan territory, originally pandas' natural habitat By Daily Mail Reporter Published: 17:55 GMT, 10 January 2013 | Updated: 17:55 GMT, 10 January 2013 A giant stone animal has been found at an excavation site in Chengdu, southwestern China, baffling archaeologists as to what it may be. 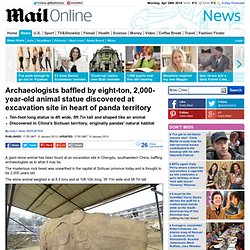 The mysterious rock beast was unearthed in the capital of Sichuan province today and is thought to be 2,000 years old. The stone animal weighed in at 8.5 tons and at 10ft 10in long, 3ft 11in wide and 5ft 7in tall. Pompeii of Japan: Scientists unearth body of 6th century Japanese 'warrior' who was buried by molten ash. First time a warrior been found buried wearing his armourWarrior is from high-caste due to positioning of body and quality of armour By Sean O'hare Published: 16:11 GMT, 18 December 2012 | Updated: 17:40 GMT, 18 December 2012. 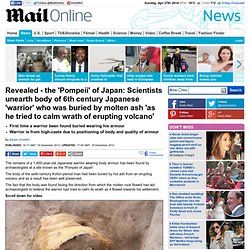 Mystery of Angkor Wat's massive stones solved - they were 'brought to the area by a massive network of canals' Findings reveal how 12th century temple complex was built out of millions of stone blocks weighing up to 1.5tons in just a few decades By Damien Gayle Published: 11:14 GMT, 1 November 2012 | Updated: 17:38 GMT, 1 November 2012 The huge stones from which the Cambodian temple complex Angkor Wat is built were carried to the area by a series of since-filled in canals, a new study claims. 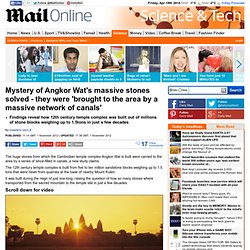 Building blocks of Angkor Wat were shipped in by canal - life - 20 October 2012. IT IS never too late to find a shortcut. 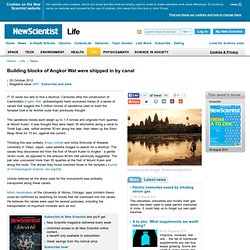 Centuries after the construction of Cambodia's Angkor Wat, archaeologists have uncovered traces of a series of canals that suggest the 5 million tonnes of sandstone used to build the temples took a far shorter route than previously thought. The sandstone blocks each weigh up to 1.5 tonnes and originate from quarries at Mount Kulen. It was thought they were taken 35 kilometres along a canal to Tonlé Sap Lake, rafted another 35 km along the lake, then taken up the Siem Reap River for 15 km, against the current.

Thinking this was unlikely, Etsuo Uchida and Ichita Shimoda of Waseda University in Tokyo, Japan, used satellite images to search for a shortcut. Mystery of Angkor Wat Temple's Huge Stones Solved. The massive sandstone bricks used to construct the 12th-century temple of Angkor Wat were brought to the site via a network of hundreds of canals, according to new research. 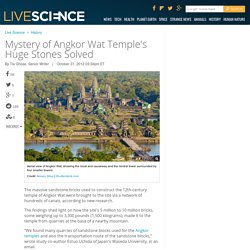 The findings shed light on how the site's 5 million to 10 million bricks, some weighing up to 3,300 pounds (1,500 kilograms), made it to the temple from quarries at the base of a nearby mountain. "We found many quarries of sandstone blocks used for the Angkor temples and also the transportation route of the sandstone blocks," wrote study co-author Estuo Uchida of Japan's Waseda University, in an email. Prehistoric Van Goghs: Artists Used Pointillism 38,000 Years Ago Nineteenth-century artists, such as Georges Seurat and Vincent van Gogh, weren't the first to use pointillism, according to a discovery of 38,000-year-old decorated limestone tablets in France. In the 12th century, King Suryavarman II of the Khmer Empire began work on a 500-acre (200 hectare) temple in the capital city of Angkor, in what is now Cambodia.

Discovered by a Nazi expedition in 1936, the incredible 1,000 year old Buddhist statue made from a METEORITE. Researchers astonished to find priceless stature was made from rare meteorite24cm tall, 10kg statue portrays the god Vaisravana By Mark Prigg Published: 18:14 GMT, 26 September 2012 | Updated: 12:00 GMT, 27 September 2012 In a discovery that sounds uncannily like the plot of an Indiana Jones film, researchers have discovered that a 1,000 year old buddhist statue found by a Nazi expedition in 1938 is made from a meteorite.

The findings, published in the journal Meteoritics and Planetary Science, reveal the priceless statue to be a rare ataxite class of meteorite. Royal discovery: Canadian student digs up 3,000-year-old sculpture of King Suppiluliuma. Darren Joblonkay, 23, was digging at an archeological camp in southeastern Turkey he discovered the two-tonne statue of King Suppiluliuma Regal figure reigned over the Neo-Hittite kingdom of Patina in the 9th century B.C.The enormous sculpture which is preserved from the waist up stands almost 5 feet (1.5 meters) tallAlongside the statue, archaeologists found another carving, a semicircular column base bearing the images of a sphinx and a winged bull By Jill Reilly Published: 16:34 GMT, 1 August 2012 | Updated: 17:15 GMT, 1 August 2012 Archeologists can spend a whole career exploring and never uncover a worthy find, but one lucky student has discovered an archeological treasure chest and he is still only 23.

Darren Joblonkay was digging at an archeological camp in southeastern Turkey when discovered an impressive 3,000-year-old statue of King Suppiluliuma. Iraq Museum International - Safety in Iraq: Civilization + Risk. Mysterious clay pots in China are 20,000 years old - baked 10,000 years before humans settled down and became farmers. Pots are oldest pottery ever discoveredDate from 10,000 years before humans 'settled down' and became farmersPush invention of pottery back to last ice ageArchaeologists struggling to work out how and why they were madeThought to have been used by roving hunter-gatherers By Rob Waugh Published: 09:51 GMT, 29 June 2012 | Updated: 12:20 GMT, 29 June 2012 Pottery fragments found in a south China cave have been confirmed to be 20,000 years old, making them the oldest known pottery in the world, according to archaeologists.

Earlier theories have held that the invention of pottery happened during the period about 10,000 years ago when humans moved from being hunter-gathers to farmers. The new find has been carbon dated by a team of Chinese and American researchers and shows scorch marks that indicate it may have been used in cooking. These pots push the invention of pottery back to the last ice age - and archaeologists are trying to understand how and why they were made.

Prof. Ancient Roman jewellery found in fifth century burial site... 6,000 miles away in JAPAN. Published: 14:56 GMT, 24 June 2012 | Updated: 07:13 GMT, 25 June 2012 Glass jewellery believed to have been made by Roman craftsmen has been found in an ancient tomb in Japan. In a sign the empire's influence may have reached the edge of Asia, three glass beads discovered in the 5th Century 'Utsukushi' burial mound in Nagaoka, near Kyoto, were probably made some time between the first and the 4th century. The government-backed Nara National Research Institute for Cultural Properties has recently finished analysing components of the glass beads, measuring five millimetres (0.2 inches) in diameter, with tiny fragments of gilt attached. Treasure: Pieces of glass jewellery believed to have been made by Roman craftsmen were discovered in a 5th century burial ground in Kyoto, western Japan.

Hidden treat: The Easter Island heads also have BODIES. By Eddie Wrenn. Rock 'n' Roll: Does this cunning technique help explain how the mysterious Easter Island heads 'walked' to their resting places? By Eddie Wrenn Published: 17:13 GMT, 20 June 2012 | Updated: 06:14 GMT, 21 June 2012 Easter Island - the land where giant stone heads gaze distantly at the sea - is both a fascinating conundrum and a wonderful microcosm of a society which moved to a new land, accidentally destroyed the ecosystem, and then eventually destroyed themselves. Legend and tells us that the ancient monuments, which range in height from four to 33 feet, were dragged into place from a distant quarry by Polynesian settlers, who sailed a thousand miles across the Pacific in canoes around AD800, before almost instantly embarking on their campaign of building the mysterious monuments.

But one thing has always led to debate: how exactly did the tribe move the 'moai' - some of which weigh more than 80 tons - to their final destinations without the benefit of modern technology. Archaeologists unveil 120 new figures discovered during third excavation of the site. Latest discoveries in China include never-before-seen artefacts, including war drums and a painted shieldMore than 310 pieces newly excavated in total By Lawrence Conway. Climate change wiped out one of the world's first, great civilisations more than 4,000 years ago. Mysterious 'body jars' used in Cambodian death rituals hints at existence of previously unknown tribe. Göbekli Tepe, Turkey - the world’s oldest temple. Hattusha: the Hittite Capital. Divers find 13th century wreck from Kublai Kahn's Mongol invasion fleet.