The Secret Language of Symbols 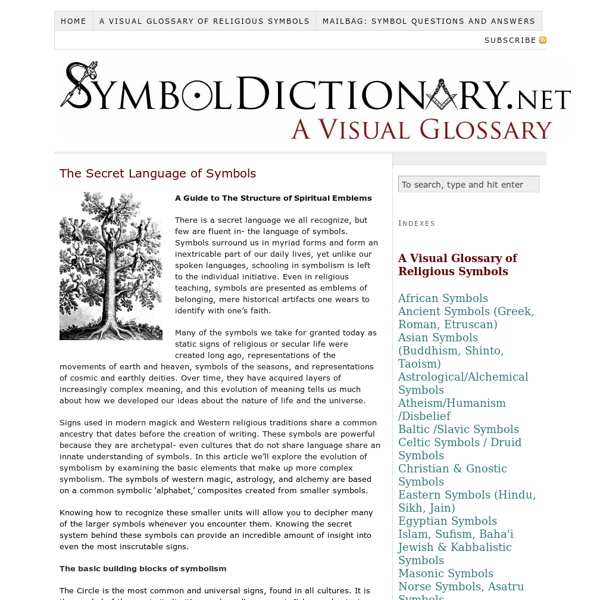 A Guide to The Structure of Spiritual Emblems There is a secret language we all recognize, but few are fluent in- the language of symbols. Symbols surround us in myriad forms and form an inextricable part of our daily lives, yet unlike our spoken languages, schooling in symbolism is left to the individual initiative. Even in religious teaching, symbols are presented as emblems of belonging, mere historical artifacts one wears to identify with one’s faith. Many of the symbols we take for granted today as static signs of religious or secular life were created long ago, representations of the movements of earth and heaven, symbols of the seasons, and representations of cosmic and earthly deities. Over time, they have acquired layers of increasingly complex meaning, and this evolution of meaning tells us much about how we developed our ideas about the nature of life and the universe. The basic building blocks of symbolism The cross is in this case actuality two separate signs-

Mysterious Enormous Underground Labyrinth Of Egypt Holds Secrets Kept From The Outside World- MessageToEagle.com MessageToEagle.com - The lost labyrinth, full of hieroglyphs sculpted for eternity in its endless stone walls is believed to contain all knowledge of ancient Egypt. The Labyrinth of Egypt has been described by a number of ancient writers such as Herodotus, Strabo, Diodorus, and Pliny. The labyrinth's age and ancient origins are unclear, but at the time of Herodotus' visit it was more than 1,300 years old. This legendary complex, named the "Labyrinth" by the ancient Greeks was legendary complex is believed to be an enormous collective tomb of the twelve kings who built it and a resting place for sacred crocodiles.

The Heroes of Myth and Folklore: Part One – Defining a Hero Herakles battling the Hydra There is a special genre of tales in the texts of Hellenic mythology that recounts the deeds of extraordinary men and women such as Herakles, Perseus, Jason and Medeia to name but a few. These larger-than-life people are called the Heroes. Their stories derive from the most ancient form of the oral tradition and have evolved through the ages into the symbolic and historical mythology of mortals who were granted immortality through their destinies and the homage and remembrance of their descendants. To study the heroes is both an historical and symbolic journey that explores how the world of the immortal Gods interacts with the world of mortal men and women.

10 Mind-Blowing Theories That Will Change Your Perception of the World Reality is not as obvious and simple as we like to think. Some of the things that we accept as true at face value are notoriously wrong. Scientists and philosophers have made every effort to change our common perceptions of it. The 10 examples below will show you what I mean. 1. Great glaciation. 5 Tibetans Energy Rejuvenation Exercises We've been practicing, teaching and recommending the 5 Tibetan Energy Rejuvenation Exercises since 1998. You can do the whole routine in 15 minutes and only need enough floor space for your body while laying down and enough air space for your arms to be outstretched. The 5 Tibetans represent a great way to keep your body in shape when you have limited time for a physical workout or limited space for a complete yoga routine.

The big list of free Kindle tools There are quite a few programs and web services that can be really useful to Kindle owners. This post compiles 17 of these that every Kindle user should know about, ranging from eBook conversion programs to services that can broadcast your favorite websites to your Kindle. Note that many of the tools listed here aren’t strictly Kindle specific, but can be very useful to anyone who has a Kindle or any other eBook reading device, such as PDF cropping tools and eBook conversion apps, etc. Areas covered include ‘eBook Reading Tools’, ‘General eBook Conversion’ , ‘PDF to Kindle Conversion’, ‘Organizing files on your Kindle’, and ‘Sending web content to your Kindle’.

How to Detect Lies - body language, reactions, speech patterns Interesting Info -> Lying Index -> How to Detect Lies Become a Human Lie Detector (Part 1) Warning: sometimes ignorance is bliss. How Biophotons Show That We Are Made Of Light. A biophoton or Ultra-weak Photon Emission, (UPE) is a kind of light particle that is emitted by all living things. Though it exists in the visible and ultraviolet spectrum, in order for us to see it, our eyes would have to be about 1,000 times more sensitive. While we can’t see them with our eyes alone, technology has given us a glimpse and what it’s shown us may have a profound impact on us all. Biophotons were first thought to be merely the byproduct of metabolic chemical reactions. That idea is being challenged with an exciting theory that claims biophotons have a much larger role to play when it comes to our physiology and quite possibly our consciousness as well.