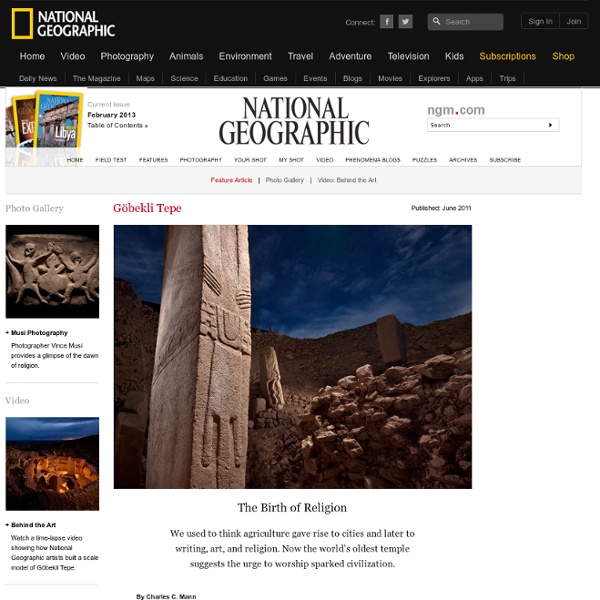 By Charles C. Mann Photograph by Vincent J. Musi Every now and then the dawn of civilization is reenacted on a remote hilltop in southern Turkey. The reenactors are busloads of tourists—usually Turkish, sometimes European. Before them are dozens of massive stone pillars arranged into a set of rings, one mashed up against the next. At the time of Göbekli Tepe's construction much of the human race lived in small nomadic bands that survived by foraging for plants and hunting wild animals. Archaeologists are still excavating Göbekli Tepe and debating its meaning. At first the Neolithic Revolution was viewed as a single event—a sudden flash of genius—that occurred in a single location, Mesopotamia, between the Tigris and Euphrates Rivers in what is now southern Iraq, then spread to India, Europe, and beyond. After a moment of stunned quiet, tourists at the site busily snap pictures with cameras and cell phones. Inches below the surface the team struck an elaborately fashioned stone. Related:  Project Managent in History

The Best Twenty-Minute Workouts by Stew Smith Do you want to jump start your New Year with some great fitness ideas that you can incorporate into your fitness routine? If you are like many Americans, getting the time to exercise is challenging. But, this article is proof that you can fit fitness into your schedule on just about any "busy" day in your life. The other day, I was emailed the following question: I only have about 20-30 minutes a day to exercise. What can I do in that amount of time? The superset is a great way to workout if you have limited time. Pushup/Crunch Superset:Repeat 10 cycles of: - 10 regular pushups- 10 crunches- 10 wide pushups- 10 crunches- 10 tricep pushups- 10/10 Left/Right crunches Leg / ab Superset:Repeat 5 cycles of:- 20 squats - 20 crunches- 10 lunges per leg- 10 crunches - 20 calf raises- 20 crunches Running or Walking! How much running or walking can you do in 20-30 minutes? Six sets of:- Sprint-1/8 mile- Jog - 1/8 mile Spartan Run: Swimming? How much swimming can you do in 20-30 minutes?

Millau Viaduct The Millau Viaduct (French: le Viaduc de Millau, IPA: [vjadyk də mijo]) is a cable-stayed bridge that spans the valley of the River Tarn near Millau in southern France. History[edit] Problems with traffic on the route from Paris to Spain along the stretch passing through the Tarn valley near the town of Millau, during the summer when the roads became jammed with holiday traffic, required construction of a bridge to span the valley.[10] The first plans were discussed in 1987 by CETE, and by October 1991, the decision was made to build a high crossing of the Tarn River by a structure of around 2,500 m (8,200 ft). In July 1996, the jury decided in favour of a cable-stayed design with multiple spans, as proposed by the Sogelerg consortium (Michel Virlogeux and Norman Foster). Possible routes[edit] Routes of the four projects of the A75 autoroute around Millau In initial studies, four options were examined: Choosing the definitive route[edit] Choice of technical design[edit] Contractors[edit]

Telomerase: the Ultimate Medical Breakthrough by Gary Vey for viewzone (2012) A couple of weeks ago the results of an experiment were published that offers a glimpse into the future of the human race -- a future when there is no more "getting old" and, most significantly, no cancer. But to fully appreciate what has happened, you will need to get the background story first. It is a natural desire to want to live a long life. We now understand exactly what causes aging and death -- on the molecular level. About a decade ago, it was discovered that the ends of the DNA molecular strands had a long series of meaningless code ("TTAGGG" in the language of DNA enzymes) that kept repeating and repeating. For humans, this means that most of our cells have a fixed length to their telomeres that shorten each time they make copies of themselves. Telomeres are actually chains of molecules. When a cell divides, the spiral DNA molecule must split in half and reassemble a copy of itself. The Holy Grail (enzyme): Telomerase The Cancer Problem Notes:

Bluestonehenge "Bluestonehenge" or "Bluehenge" is a prehistoric henge and stone circle monument that was discovered by the Stonehenge Riverside Project about 1 mile (1.6 km) south-east of Stonehenge in Wiltshire , England . All that currently remains of the site is the ditch of the henge and a series of stone settings, none of which is visible above ground. The site was excavated in August 2008 and again in August 2009 and is considered to be an important find by archaeologists . [ 1 ] Full details of the discovery were published in the 2010 January / February edition of British Archaeology . [ 2 ] Initial findings [ edit ] Bluestonehenge digital reconstruction - oval configuration. The monument has been tentatively dated to between about 3000 and 2400 BC, although radiocarbon dating of antler tools found at the site has only provided an approximate date of 2469 to 2286 BC for the dismantling of the stones. Context [ edit ] The henge is located beside the River Avon in West Amesbury . See also [ edit ]

A fascinating interview with China’s biggest rock star Cui Jian would probably be the first person to lament that he, at 51, is still the biggest name in Chinese rock music, and that his music last occupied the cultural zeitgeist in a dramatic 1990 concert tour. That's the impression he gives in this revealing interview with Vice, anyway. Whether you think Cui's cynicism is misplaced or not, his thoughts on the state of Chinese are revealing. Cui, often called the father or grandfather of Chinese rock, is careful when discussing the Chinese government, with which he has a complicated history. A scholar of Chinese pop music, Jonathan Campbell, has said, "I can't think of someone who has ever been more worthy than Cui Jian for induction into the Rock and Roll Hall of Fame." In this interview, Cui says that he's tried and failed many times to secure permission for another big show, but he stops short of complaining or criticizing. Here are, in order, "A Piece of Red Cloth," "Nothing to My Name," and my favorite, "Fake Monk":

Göbekli Tepe Göbekli Tepe The function of the structures is not yet clear. The most common opinion, shared by excavator Klaus Schmidt, is that they are early neolithic sanctuaries. Discovery[edit] The site was first noted in a survey conducted by Istanbul University and the University of Chicago in 1963. In 1994, Klaus Schmidt, now of the German Archaeological Institute, who had previously been working at Nevalı Çori, was looking for another site to lead a dig. The following year, he began excavating there in collaboration with the Şanlıurfa Museum. Dating[edit] View of site and excavation The imposing stratigraphy of Göbekli Tepe attests to many centuries of activity, beginning at least as early as the epipaleolithic, or Pre-Pottery Neolithic A (PPNA), in the 10th millennium BC. There are a number of radiocarbon dates (presented with one standard deviation errors and calibrations to BCE): The Hd samples are from charcoal in the lowest levels of the site and would date the active phase of occupation. Plateau[edit]

101 Facts About Newgrange - Construction of Newgrange 21 Newgrange mound should be properly referred to as a cairn, because it consists of water-rolled pebbles, each of which is between 6 to 9 inches across. 22 The entire mound contains an estimated 200,000 tonnes of material, and it has been estimated construction would have taken about 30 years using a workforce of about 300. 23 It is not known with any certainty how the larger stones which form the kerb and passage and chamber of Newgrange were brought to the site. Many of these stone slabs, 550 in number, were collected from where they had been lying in the landscape. Because many of the stones were found to be weathered, it is believed they were not quarried, so there would have been a huge logistical task in finding suitable boulders dotted throughout the landscape. 24 Because Newgrange sits atop a ridge, many of the large slabs would have needed to be brought uphill, again suggesting a highly organised community was behind its construction. 25 Michael J.

Newgrange Newgrange (Irish: Sí an Bhrú)[1] is a prehistoric monument in County Meath, Ireland, about one kilometre north of the River Boyne.[2] It was built about 3200 BC,[3][4] during the Neolithic period, which makes it older than Stonehenge and the Egyptian pyramids.[5] Newgrange is a large circular mound with a stone passageway and chambers inside. The mound has a retaining wall at the front and is ringed by 'kerbstones' engraved with artwork. There is no agreement about what the site was used for, but it has been speculated that it had religious significance – it is aligned with the rising sun and its light floods the chamber on the winter solstice. After its initial use, Newgrange was sealed and it remained so for several millennia, later appearing in Irish mythology and folklore. Physical description[edit] The mound and passage tomb[edit] Cross section sketch of the passage Art[edit] Entrance stone with megalithic art. History[edit] Construction and burials[edit] Newgrange Purpose[edit]

Timeline of project management Timeline of project management - there is a general understanding that the history of modern project management started around 1950. Until 1900, projects were generally managed by creative architects and engineers themselves, among those, for example, Christopher Wren, Thomas Telford and Isambard Kingdom Brunel.[1] Early civilizations[edit] 2570 BC Great pyramid of Giza completed. Some records remain of how the work was managed: e.g. there were managers of each of the four faces of the pyramid, responsible for their completion (subproject managers).208 BC The first major construction of the Great Wall of China. 15th - 19th century[edit] Christopher Wren (1632–1723) was a 17th-century English designer, astronomer, geometer, mathematician-physicist and one of the greatest English architects in history. 20th century[edit] 1910s The Gantt chart developed by Henry Laurence Gantt (1861–1919) 1950s 1960s 1970s 1980s 1990s 21st century[edit] See also[edit] List of project management topics References[edit]

A Brief History of Project Management | Project Smart By Duncan Haughey, PMP | 2 Jan 2010 | updated 21 Apr 2013 In this history of project management, I chart all the major developments and events in the discipline as far back as there are records. Although there has been some form of project management since early civilisation, project management in the modern sense began in the 1950s. 2570 BC: The Great Pyramid of Giza Completed The Pharaohs built the pyramids and today archaeologists still argue about how they achieved this feat. 208 BC: Construction of the Great Wall of China Later still, another of the Seven Wonders of the World was built. 1917: The Gantt chart Developed by Henry Gantt (1861-1919) One of the forefathers of project management, Henry Gantt is best-known for creating his self-named scheduling diagram, the Gantt chart. 1956: The American Association of Cost Engineers (now AACE International) Formed 1957: The Critical Path Method (CPM) Invented by the Dupont Corporation 1975: PROMPTII Method Created by Simpact Systems Limited

The Ur and Harran Latitudes, and Göbekli Tepe NEWS: "... latitude at Harran equals 3/4 atan and at Ur 3/5 atan ..." 2008.04.25 - When is a "moon temple" an observatory? Recent press reports called my attention to Göbekli Tepe in Turkey (Göbekli Tepe - An Introduction). Since 1994, archaeologist Klaus Schmidt has excavated at the Göbekli Tepe stone circles, circles 7,000 years older than Stonehenge. None of us, not even archaeos, needs an excuse for being unfamiliar with such early Neolithic megalithic monuments; their existence is still big news. Harran is renowned as a Sabaean center associated with a moon "temple" and as an earlier Sumerian center. At this point the Old World had captured my attention once again, distracting from great pueblo geometry near the same latitude. Summarizing, colatitude at Harran equals 4/3 atan and at Ur 5/3 atan. Getting to why I did not notice the Ur colatitude right off, I checked latitude first because the precise value for pi caught my eye in the conversion table. I recommend the article.

This is the cutting edge. They question did religion come before agriculture. by worldhistoryhonors Sep 5