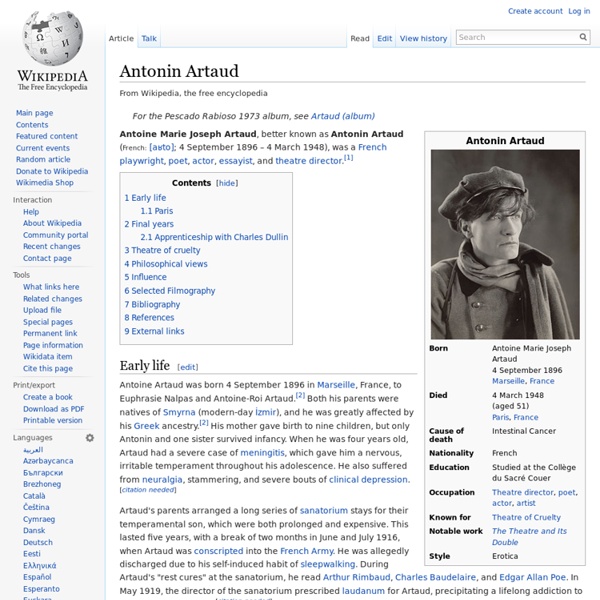 Antoine Marie Joseph Artaud, better known as Antonin Artaud (French: [aʁto]; 4 September 1896 – 4 March 1948), was a French playwright, poet, actor, essayist, and theatre director.[1] §Early life[edit] Antoine Artaud was born 4 September 1896 in Marseille, France, to Euphrasie Nalpas and Antoine-Roi Artaud.[2] Both his parents were natives of Smyrna (modern-day İzmir), and he was greatly affected by his Greek ancestry.[2] His mother gave birth to nine children, but only Antonin and one sister survived infancy. When he was four years old, Artaud had a severe case of meningitis, which gave him a nervous, irritable temperament throughout his adolescence. Artaud's parents arranged a long series of sanatorium stays for their temperamental son, which were both prolonged and expensive. §Paris[edit] In March 1920, Artaud moved to Paris to pursue a career as a writer, and instead discovered he had a talent for avant-garde theatre. §Final years[edit] §Apprenticeship with Charles Dullin[edit]

Latest Shows | Madness Radio Rhizome (philosophy) "As a model for culture, the rhizome resists the organizational structure of the root-tree system which charts causality along chronological lines and looks for the original source of 'things' and looks towards the pinnacle or conclusion of those 'things.' A rhizome, on the other hand, is characterized by 'ceaselessly established connections between semiotic chains, organizations of power, and circumstances relative to the arts, sciences, and social struggles.' Rather than narrativize history and culture, the rhizome presents history and culture as a map or wide array of attractions and influences with no specific origin or genesis, for a 'rhizome has no beginning or end; it is always in the middle, between things, interbeing, intermezzo.' "In this model, culture spreads like the surface of a body of water, spreading towards available spaces or trickling downwards towards new spaces through fissures and gaps, eroding what is in its way. Deleuze, Gilles and Félix Guattari. 1980.

Ashkenazi Jews rank smartest in world - Israel Jewish Scene, Ynetnews Studies show descendants of Jews from Medieval Germany, throughout Europe have IQ 20% higher than global average Is it possible for your ancestry, religious affiliation, or nationality to determine your intellect? According to a study performed by Cambridge University called, "From Chance to Choice: Genetic and Justice," Ashkenazi Jews have a median IQ of 117. That’s 10 points higher than the “accepted” IQ of their biggest competition, Northeast Asia, and 20% higher than the global average. Reprinted with permission from Shalom Life

Gilles Deleuze Gilles Deleuze (French: [ʒil dəløz]; 18 January 1925 – 4 November 1995) was a French philosopher who, from the early 1960s until his death, wrote influentially on philosophy, literature, film, and fine art. His most popular works were the two volumes of Capitalism and Schizophrenia: Anti-Oedipus (1972) and A Thousand Plateaus (1980), both co-written with Félix Guattari. His metaphysical treatise Difference and Repetition (1968) is considered by many scholars to be his magnum opus.[2] Life[edit] Deleuze was born into a middle-class family in Paris and lived there for most of his life. His initial schooling was undertaken during World War II, during which time he attended the Lycée Carnot. Deleuze taught at various lycées (Amiens, Orléans, Louis le Grand) until 1957, when he took up a position at the Sorbonne. In 1969 he was appointed to the University of Paris VIII at Vincennes/St. Deleuze himself found little to no interest in the composition of an autobiography. Philosophy[edit] [edit]

Occupy Wall Street | NYC Protest for American Revolution Dictionary of concepts for Graham Harman’s object-oriented philosophy [draft: work in progress] | Avoiding/the\Void Object-Oriented Philosophy: A Graham Harman Dictionary of Concepts [Feel free to comment if you have improvements for any of the definitions or notice any errors. I will continually update, add new words and generally make it more comprehensive as time goes on. This is by no means a definitive list, and beware that Harman's philosophical terminology and descriptions have changed in parts from Tool-Being to Prince of Networks. Some of the definitions are a little short and scrappy, so there's lots to work to do] “Allure is a special and intermittent experience in which the intimate bond between a thing’s unity and its plurality of notes somehow partially disintegrates” (GM, p.143). “Relations between all real objects, including mindless chunks of dirt, occur only be means of some form of allusion. BONDS [incomplete] - PHYSICAL BONDS: “there is the unremitting duel between an object itself as a real unity, as a single thing, and the same object as made up of numerous specific features”.

We Are the 99 Percent 14th October 2013 Question with 172 notes Anonymous asked: How can you claim to speak for 99% of people? We don’t claim to speak for anyone, we merely present stories. 14th October 2013 Photo with 186 notes I am 23 years old I am a female (not that it should make a difference, but apparently in our society it does…) From the day I moved out of my parent’s house, I’ve supported myself 100%, not because they don’t love me but because they can’t support my dreams financially. For over two years I schlepped 2-for-1’s and shots to pay for my rent, a used car, and tuition at a community college. Now I’m attending the University of MN and I depleted all of my savings just so I wouldn’t have to take out a loan this semester. I’m majoring in journalism, a profession I consider a civic duty. I am the 99%. occupywallst.org 14th October 2013 Question with 12 notes Anonymous asked: We are the 99 percent- Why don't we RECALL these extremist NUTS that are in Washington, DC.??!!!! 9th September 2013 Thank you!

Speculative Heresy | exploring speculative realism, non-philosophy, and other heresies Teign Estuary Transition nick land Single-nucleotide polymorphism DNA molecule 1 differs from DNA molecule 2 at a single base-pair location (a C/T polymorphism). A Single-nucleotide polymorphism (SNP, pronounced snip; plural snips) is a DNA sequence variation occurring when a Single Nucleotide — A, T, C or G — in the genome (or other shared sequence) differs between members of a biological species or paired chromosomes. For example, two sequenced DNA fragments from different individuals, AAGCCTA to AAGCTTA, contain a difference in a single nucleotide. In this case we say that there are two alleles. Almost all common SNPs have only two alleles. These genetic variations between individuals (particularly in non-coding parts of the genome) are exploited in DNA fingerprinting, which is used in forensic science. Types[edit] SNPs in the coding region are of two types, synonymous and nonsynonymous SNPs. Use and importance[edit] The study of SNPs is also important in crop and livestock breeding programs. Examples[edit] Databases[edit] Nomenclature[edit] Notes[edit]