Wars of the Roses - Wikipedia 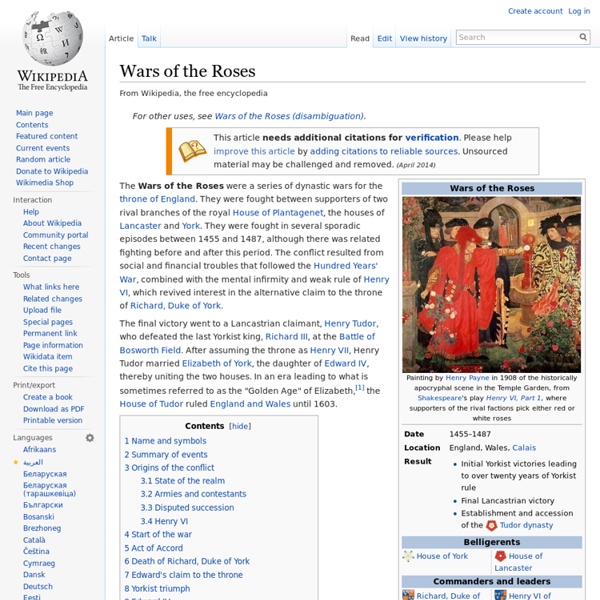 The Wars of the Roses were a series of dynastic wars for the throne of England. They were fought between supporters of two rival branches of the royal House of Plantagenet, the houses of Lancaster and York. They were fought in several sporadic episodes between 1455 and 1487, although there was related fighting before and after this period. The final victory went to a Lancastrian claimant, Henry Tudor, who defeated the last Yorkist king, Richard III, at the Battle of Bosworth Field. Name and symbols[edit] The name Wars of the Roses refers to the Heraldic badges associated with the two royal houses, the White Rose of York and the Red Rose of Lancaster. Though the names of the rival houses derive from the cities of York and Lancaster, the corresponding duchies had little to do with these cities. Summary of events[edit] Summary of events - Wars of the Roses York returned to the country and became Protector of England, but was dissuaded from claiming the throne. Origins of the conflict[edit]

Battle of Ludford Bridge The Battle of Ludford Bridge was a largely bloodless battle fought in the early years of the Wars of the Roses. It took place on 12 October 1459, and resulted in a setback for the Yorkists. Although this seemed to be a triumph for the rival Lancastrians at the time, they had thrown away their advantage within six months. Background[edit] In the first pitched battle of the wars, the First Battle of St Albans in 1455, Richard of York had eliminated most of his rivals at court. He reaffirmed his allegiance to the King, Henry of Lancaster and was reappointed Lord Lieutenant of Ireland. Events were precipitated by some high-handed actions by Richard's nephew Richard Neville, 16th Earl of Warwick. Richard's forces began the campaign dispersed over the country. Battle[edit] Ludford Bridge with Lower Broad Street leading to Ludlow's Broad Gate. Richard retreated towards Ludlow, before making a stand at a fortified position near Ludford, Shropshire on 12 October. Aftermath[edit] Notes[edit]

Marrying for Love: The Experience of Edward IV and Henry VIII | History Today Edward IVShould the monarch or heir to the throne marry for love? ‘Of course’ is the answer most people in Britain would give today, but history suggests otherwise. It is not just that the 1689 Bill of Rights and the 1701 Act of Settlement rule out marriage with a Roman Catholic. Monarchs and heirs to the throne have never had the freedom of choice which their subjects enjoy. Three basic principles have governed the choice of a royal consort. The story of Edward IV’s marriage is that in 1464 the twenty-four-year-old king stopped at Stony Stratford on a march north to counter Lancastrian threats. Henry VIII’s marriage to his first wife, Katherine of Aragon, was made in the cause of diplomacy and when it broke down Cardinal Wolsey proposed a French bride. This personal involvement started off the marriages of Edward IV and Henry VIII on a totally novel basis. Under these circumstances, emotional commitment was never a real possibility early in a conventional royal marriage.

Richard of York, 3rd Duke of York Richard of York, 3rd Duke of York (21 September 1411 – 30 December 1460), was a leading English magnate, a great-grandson of King Edward III through his father and a great-great-great-grandson of that king through his mother. He inherited great estates, and served in various offices of state in France at the end of the Hundred Years' War, and in England, ultimately governing the country as Lord Protector during Henry VI's madness. His conflicts with Henry's wife, Margaret of Anjou, and other members of Henry's court, as well as his extremely strong competing claim on the throne, were a leading factor in the political upheaval of mid-fifteenth-century England, and a major cause of the Wars of the Roses. Richard eventually attempted to take the throne but was dissuaded, although it was agreed that he would become King on Henry's death. Although Richard never became king himself, he was the father of Edward IV and Richard III. Descent[edit] Childhood and upbringing[edit] St.