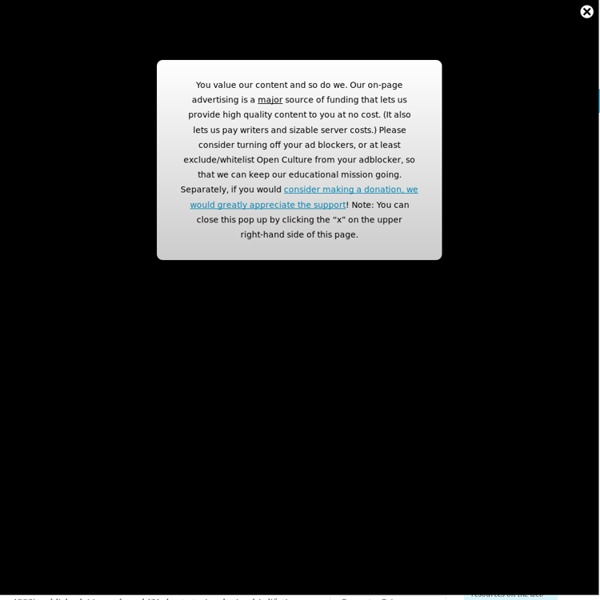 Although he died when he was only 53 years old, Philip K. Dick (1928 – 1982) published 44 novels and 121 short stories during his lifetime and solidified his position as arguably the most literary of science fiction writers. His novel Ubik appears on TIME magazine’s list of the 100 best English-language novels, and Dick is the only science fiction writer to get honored in the prestigious Library of America series, a kind of pantheon of American literature. If you’re not intimately familiar with his novels, then you assuredly know major films based on Dick’s work – Blade Runner, Total Recall, A Scanner Darklyand Minority Report. Today, we bring you another way to get acquainted with his writing. We're presenting a selection of Dick's stories available for free on the web. eTexts (find download instructions here) Audio P.S. Related Content: Robert Crumb Illustrates Philip K. Philip K. Free Science Fiction Classics on the Web: Huxley, Orwell, Asimov, Gaiman & Beyond

Short Stories Online Homepage > Resources > Web Sites > Short Stories Online These Philip K. Dick stories come from Project Gutenberg and are stories that were written early in his career. For more reading formats, visit that site. Only html and text are provided here. Beyond Lies the Wub html text Beyond the Door html text Mr. Emily Wilson's 'Odyssey' Scrapes The Barnacles Off Homer's Hull In the 17th century, the poet John Dryden satirized the deep anxiety around letting women learn the Classics: But of all Plagues, the greatest is untold;The Book-Learn'd Wife in Greek and Latin bold.The Critick-Dame, who at her Table sits:Homer and Virgil quotes, and weighs their Wits; Alas! We Critick-Dames abound. Your Picks: Top 100 Science-Fiction, Fantasy Books More than 5,000 of you nominated. More than 60,000 of you voted. And now the results are in. The winners of NPR's Top 100 Science-Fiction and Fantasy survey are an intriguing mix of classic and contemporary titles. Over on NPR's pop culture blog, Monkey See, you can find one fan's thoughts on how the list shaped up, get our experts' take, and have the chance to share your own. A quick word about what's here, and what's not: Our panel of experts reviewed hundreds of the most popular nominations and tossed out those that didn't fit the survey's criteria (after — we assure you — much passionate, thoughtful, gleefully nerdy discussion).

40 Great Anthropology Books That Anyone Can Appreciate Humans studying humans is what anthropology essentially boils down into. Considering what all the subject entails, it comes as no shock to anyone at all that many find it absolutely gripping. But not everyone ends up with a formal education or profession in or near the field, thus rendering some reads a little too technical. But fortunately, a right fair amount of excellent popular anthropology books exist to make the extremely nuanced topic accessible to anyone. As anthropology feeds from such a diverse range of scientific and liberal arts subjects, this list (which reflects no intentional order) seeks to reflect that structure rather than focusing on one in particular. Therefore, many worthwhile reads ended up slashed for space and time reasons, but that doesn’t mean their words ought to go unconsidered.

List of books banned by governments - Wikipedia Wikipedia list article A display of formerly banned books at a US library In many territories, distribution, promotion, or certain translations of the Bible have historically been prohibited or impeded. See Censorship of the Bible.[1] Many countries throughout the world have their own methods of restricting access to books, although the prohibitions vary strikingly from one country to another: hate speech, for example, is prohibited in a number of countries, such as Sweden, though the same books may be legal in the United States or United Kingdom, where the only prohibition is on child pornography.[citation needed]

A Visual Timeline of AI Predictions in Science Fiction As anyone who’s started a company knows, choosing a name is no easy task. There are many considerations, such as: Are the social handles and domain name available?Is there a competitor already using a similar name? Torching the Modern-Day Library of Alexandria You were going to get one-click access to the full text of nearly every book that’s ever been published. Books still in print you’d have to pay for, but everything else—a collection slated to grow larger than the holdings at the Library of Congress, Harvard, the University of Michigan, at any of the great national libraries of Europe—would have been available for free at terminals that were going to be placed in every local library that wanted one. At the terminal you were going to be able to search tens of millions of books and read every page of any book you found. You’d be able to highlight passages and make annotations and share them; for the first time, you’d be able to pinpoint an idea somewhere inside the vastness of the printed record, and send somebody straight to it with a link.

How to Build a Universe That Doesn't Fall Apart Two Days Later First, before I begin to bore you with the usual sort of things science fiction writers say in speeches, let me bring you official greetings from Disneyland. I consider myself a spokesperson for Disneyland because I live just a few miles from it—and, as if that were not enough, I once had the honor of being interviewed there by Paris TV. For several weeks after the interview, I was really ill and confined to bed.