17 Beautiful Indigenous Comic Books and Video Games For Kids. If you know where to look, there has been a noticeable reclamation for Indigenous storytellers. 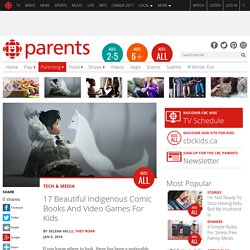 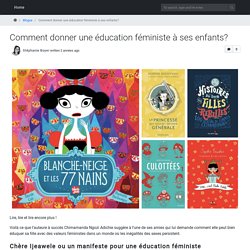 Des livres pour découvrir les nations autochtones. 14 Books That Teach Intersectional Feminism To Kids. For little learners, bedtime stories (or anytime stories) can be one of the best parts of the whole day. 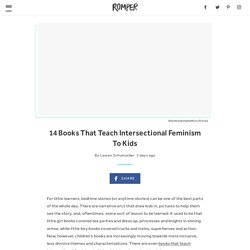 There are narrative arcs that draw kids in, pictures to help them see the story, and, oftentimes, some sort of lesson to be learned. It used to be that little girl books covered tea parties and dress up, princesses and knights in shining armor, while little boy books covered trucks and trains, superheroes and action. Now, however, children's books are increasingly moving towards more inclusive, less divisive themes and characterizations. There are even books that teach intersectional feminism to kids, which is an important topic to cover. But, as important as it is, concepts like intersectional feminism can sometimes be tricky to teach little ones, whose worlds revolve so heavily around what they can see with their own two eyes and what directly affects them personally.

The Feminist Legacy of the Baby-Sitters Club. Not long ago, I found a homemade flyer inside my mailbox. 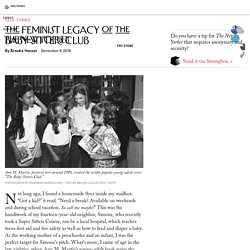 “Got a kid?” It read. “Need a break? Available on weekends and during school vacation. So call me maybe!” 8 Middle Grade Books with LGBTQ Characters. Hello and welcome to the second installment of Ask Your Friendly Neighbourhood Lesbrarian! 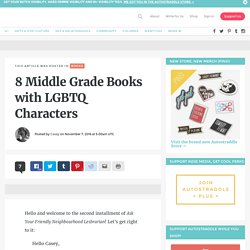 Let’s get right to it: Hello Casey, Please help! I have a very precocious eight year old daughter who began speaking at nine months and decided that she would marry a woman before she turned two. She learned the term lesbian from the show Supergirl, and now matter of factly proclaims herself a lesbian to anyone. How to Build a Feminist Library For Your Baby. It was bedtime and I was reading "The Story of Ruby Bridges" to my almost 3-year-old daughter Satya. 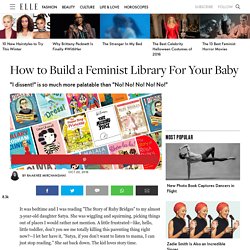 She was wiggling and squirming, picking things out of places I would rather not mention. A little frustrated—like, hello, little toddler, don't you see me totally killing this parenting thing right now? —I let her have it, "Satya, if you don't want to listen to mama, I can just stop reading. " 19 Children's Books That Help Kids Understand Feminism. Teaching your children about the world around them is no easy feat. 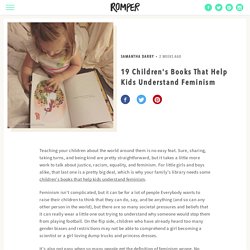 Sure, sharing, taking turns, and being kind are pretty straightforward, but it takes a little more work to talk about justice, racism, equality, and feminism. For little girls and boys alike, that last one is a pretty big deal, which is why your family's library needs some children's books that help kids understand feminism. Feminism isn't complicated, but it can be for a lot of people Everybody wants to raise their children to think that they can do, say, and be anything (and so can any other person in the world), but there are so many societal pressures and beliefs that it can really wear a little one out trying to understand why someone would stop them from playing football. On the flip side, children who have already heard too many gender biases and restrictions may not be able to comprehend a girl becoming a scientist or a girl loving dump trucks and princess dresses. Visionary Vintage Children’s Book Celebrates Gender Equality, Ethnic Diversity, and Space Exploration.

For all their immeasurable delight, children’s books also have a serious cultural responsibility — they capture young minds and plant in them the seeds that blossom into beliefs about what is socially acceptable, what is right and wrong, and what is possible. 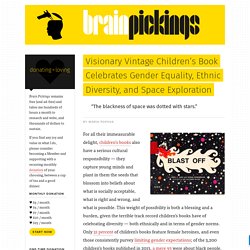 This weight of possibility is both a blessing and a burden, given the terrible track record children’s books have of celebrating diversity — both ethnically and in terms of gender norms. Only 31 percent of children’s books feature female heroines, and even those consistently purvey limiting gender expectations; of the 3,200 children’s books published in 2013, a mere 93 were about black people. The ones that fully embrace cultural diversity or empower girls are few and far between, to say nothing of those rare specimens that get girls excited about science. One of the most heartening antidotes to this lamentable state of affairs comes from 1973. She explains that it’s a spaceship and shares her dream of flying on a real one someday: 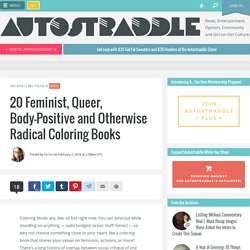 You can zone out while doodling on anything — owls! Bridges! 50 Feminist Book Gifts For Your Nieces and Nephews This Holiday Season. Nieces and nephews are hands down the absolute best relatives. 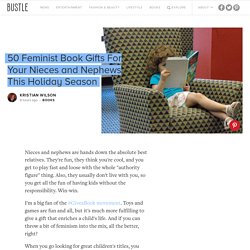 They're fun, they think you're cool, and you get to play fast and loose with the whole "authority figure" thing. Also, they usually don't live with you, so you get all the fun of having kids without the responsibility. Win-win. La littérature jeunesse avant la guerre #OMG littéralement. Qu'est-ce qui fait triper vos enfants ces temps-ci? 11 Frequently Banned Books By Female Writers That You Absolutely Cannot Miss. There’s one upside to book-banning: it’s that kind of like anything-banning, the more you take something away, the more people want it.

Is it the danger? The mystery? (The ridiculousness of a book being banned in the first place?) Whatever it is, reading banned books is a fantastic idea. Not only are you telling those who are pro-censorship that you’re not going to take any of their BS, but you also just might get a little thrill from getting your paws on the prohibited. Fuckyeahyoungadultlit: citizen-zero: YA... Fallacy of shielding boys from stories about girl characters. Best-selling author Shannon Hale thought something was up when she looked into her audience of middle schoolers and saw only girls' faces.

Hale is the voice behind 15 children's and young adult novels, including "The Princess Academy" series (Bloomsbury USA), the "Ever After High" series (Little/Brown) and "Austenland" (Bloomsbury USA), which was adapted into a 2013 movie starring Keri Russell. Her books are richly imagined, beautifully woven and widely embraced by educators and kids alike. So where the heck were the boys? "The administration only gave permission to the middle-school girls to leave class for your assembly," a teacher later told Hale, who recounted the experience on her blog.

Children’s books are never just for children. Who today remembers the plays of AA Milne or the political writing of Erich Kästner? Yet their children’s books are read the world over. Salman Rushdie has suggested that of all his work – including Midnight’s Children, which won the Best of the Booker – his children’s books may last the longest. He recalled being urged to write them by publisher Kurt Maschler, who had published Kästner’s Emil and the Detectives. Des livres pour enfants qui bousculent les stéréotypes. La nouvelle super-héroïne indienne est une femme victime de viol.

23 Vintage Young Adult Novel Covers With Major Lesbian Subtext. 100 Young Adult Books for the Feminist Reader. Sujets graves dans la littérature pour enfants : POUR. Why Women Writers Still Take Men's Names. “It sometimes makes sense for a female author to... Elizabeth Vail: The Legacy of Katniss, or, Why We Should Stop 'Protecting' Manhood and Teach Boys to Embrace the Heroine. Beyond Judy Blume: Which Young Adults are They Courting? Where Are the Girls in Children’s Lit? Writing Children’s Books While Black and Feminist.