A Weekly Conservative Magazine and Blog of News and Opinion. 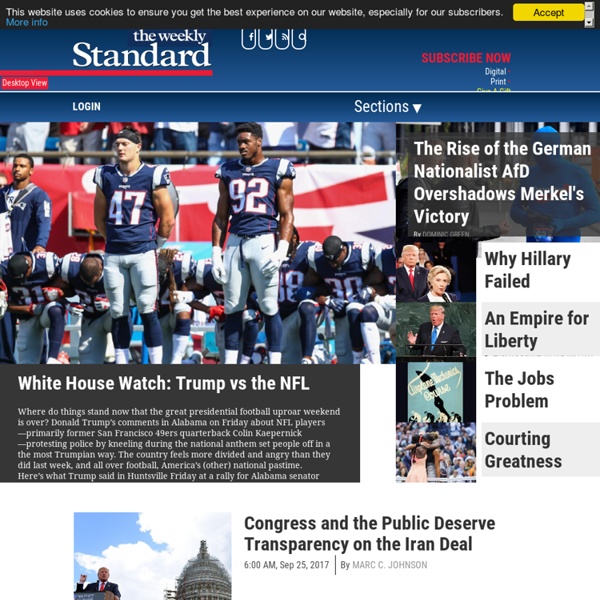 “The Better Angels of Our Nature: Why Violence Has Declined,” by Steven Pinker Most people, however, think they live in uniquely violent times, a popular misconception that encourages panic. Travelers frightened of terrorism spurn airplanes in favor of much more dangerous cars. Parents worried about sidewalk pedophiles drive children to school and thereby exponentially increase the risks they face. The world seems violent partly because films, Web sites, video games and music pummel us with images of brutality.

Amazing Places To Experience Around The Globe (Part 1) 98 Flares Facebook 13 Twitter 15 Google+ 60 StumbleUpon 0 Pin It Share 10 10 98 Flares × Kayangan Lake, Coron islands, Palawan, Philippines Preachers Rock, Preikestolen, Norway Blue Caves – Zakynthos Island, Greece Skaftafeli – Iceland William Kristol The crowing by the Obama administration over getting 7 million people to sign up for mandatory health insurance—with some portion actually paying for it—will soon fade. The big picture will remain clear: Obamacare isn’t working. And Americans, who didn’t like Obamacare when the Democrats passed it four years ago, don’t like it now, don’t want it to remain, and doubt it can be fixed. But they also don’t much want to go back to the pre-Obamacare world. According to Real Clear Politics, a recent ABC News/Washington Post poll of registered voters was the 111th consecutive poll to find more opposition to Obamacare than support for it. That poll—which was more favorable to Obamacare than most—found 48 percent support for Obamacare, 50 percent opposition to it, and a 12-point deficit for it among those who feel “strongly” (27 to 39 percent).

Long Island Tide Tables Here are the tide tables for Long Island. Just about every possible location is covered here. Listings are in alphabetical order. Amy Chua - The 2011 TIME 100 Amy Chua, 48, started a firestorm when she published her memoir, Battle Hymn of the Tiger Mother. When an entire nation reacts so strongly to something, you know you have hit a nerve. And Amy did. She hit us where it hurts, questioning our parenting, our kids' educational achievement and our nation's ability to compete globally in today's world.

Marginal Revolution Going as far back as Andrew Weiss’s survey paper , there are various attempts to argue that the two theories make the same predictions about earnings and education. A randomly elevated individual will earn more money but is this from having learned more or from being pooled with a more productive set of peers? To explore this, let’s pursue the very good question asked by Bryan Caplan : Our story begins with a 22-year-old high school graduate with a B average. He knows an unscrupulous nerd who can hack into Harvard’s central computer and give him a fake diploma, complete with transcript.

Thomas Sowell - Conservative Columnist and Political Commentator2010 Column Archive2007 Column Archive Thomas Sowell was born in North Carolina and grew up in Harlem. As with many others in his neighborhood, Thomas Sowell left home early and did not finish high school. The next few years were difficult ones, but eventually he joined the Marine Corps and became a photographer in the Korean War. The Tyranny of Meritocracy - Megan McArdle - Business I don't care about income inequality. I care about the absolute condition of the poor--whether they are hungry, cold, and sick. But I do not care about the gap between their incomes, and those of Warren Buffett and Bill Gates. Nor the ratio of Gates and Buffett's incomes to mine. And I'm not sure why anyone should. Other than pure envy, it's hard to see how I could somehow be made worse off if Bill Gates' income suddenly doubled, but everything else remained the same.

Street Sweep - Fortune Finance: Hedge Funds, Markets, Mergers & Acquisitions, Private Equity, Venture Capital, Wall Street, Washington Apparently Bernie Madoff wasn't the only bad apple at Nasdaq. In the latest shining moment for the U.S. stock exchanges, the Securities and Exchange Commission on Thursday charged Donald Johnson, a former Nasdaq managing director, with ripping off investors to the tune of $755,000 by insider trading ahead of the release of corporate press releases. Johnson, you will be impressed to learn, was in charge through October 2009 of the Nasdaq's "market intelligence" desk, which is surely a misnomer but seems in any case to have afforded him with a lot of info he used to trade profitably on outfits like United Therapeutics (UTHR). Fearless leader The SEC has come under heavy fire in recent years for its failure to nab Madoff, a three-term Nasdaq chairman in the 1990s, before he frittered away $20 billion in the biggest-ever Ponzi scheme.

To Tweet or Not to Tweet The economy may be troubled, but one area is thriving: social media. They begin with Facebook and extend through a dizzying array of companies that barely existed five years ago: Twitter, LinkedIn, Groupon, Yammer, Yelp, Flickr, Ning, Digg — and the list goes on. These companies are mostly private but have attracted the ardent attention of Wall Street and investors, with Facebook now worth a purported $75 billion and Groupon valued at close to $25 billion. There can be little doubt that these companies enrich their founders as well as some investors. But do they add anything to overall economic activity? While jobs in social media are growing fast, there were only about 21,000 listings last spring, a tiny fraction of the 150 million — member U.S. workforce.