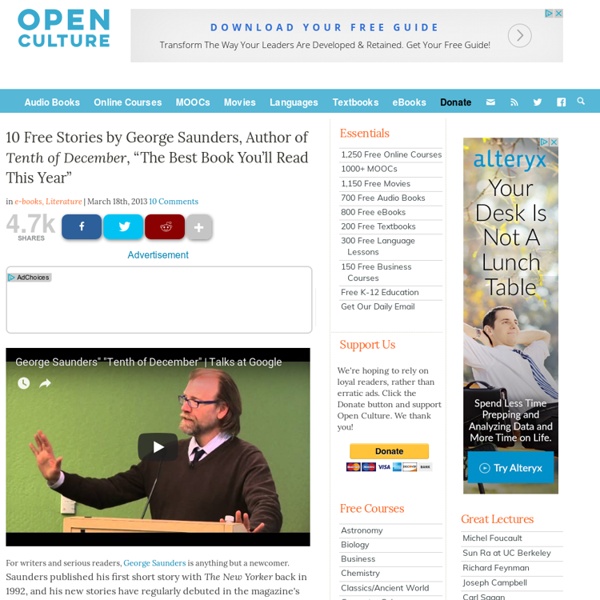 For writers and serious readers, George Saunders is anything but a newcomer. Saunders published his first short story with The New Yorker back in 1992, and his new stories have regularly debuted in the magazine's Fiction section ever since. Over the years, he has gained the reputation of being a "writer's writer," with authors like Tobias Wolff saying about Saunders: “He’s been one of the luminous spots of our literature for the past 20 years.” If you're not familiar with Saunders' writing, then we have you covered. The Semplica-Girl Diaries * - New Yorker, October 2012Tenth of December * - New Yorker, October 2011The Red Bow - Esquire, April 2009Puppy * - New Yorker, May 2007CommComm - New Yorker, August 2005Bohemians - New Yorker, January 2004Adams - New Yorker, August 2004Jon - New Yorker, January 2003Sea Oak - Barcelona Review, 2000A Lack of Order in the Floating Object Room - Northwest Review, 1986 Related Content Neil Gaiman’s Free Short Stories Free Philip K.

"A Temporary Matter," Jhumpa Lahiri – 8 Short Stories For Spring Here are some short stories to get us ready for spring in all the weirdest ways. For those living in the coldest parts of the world, spring can signify a glorious moment of change and of transition. When the air begins getting lighter, the nights longer, the sun brighter, many move forward with the push of spring at our heels. Storyville: Top Ten Best Short Stories Ever How dare I make a list of the top ten short stories ever, right? Who the hell do I think I am? Well, obviously I’m a fan of fiction, of the short story form. I’m also an author. And I now have my MFA in Creative Writing as well. Does that make me an authority? Roman Fever- by Edith Wharton (1862-1937) Read the collected works of Edith Wharton.More E-texts Roman Fever by Edith Wharton (1862-1937) From the table at which they had been lunching two American ladies of ripe but well-cared-for middle age moved across the lofty terrace of the Roman restaurant and, leaning on its parapet, looked first at each other, and then down on the outspread glories of the Palatine and the Forum, with the same expression of vague but benevolent approval. As they leaned there a girlish voice echoed up gaily from the stairs leading to the court below. "Well, come along, then," it cried, not to them but to an invisible companion, "and let's leave the young things to their knitting," and a voice as fresh laughed back: "Oh, look here, Babs, not actually knitting—" "Well, I mean figuratively," rejoined the first.

Hares in the Old Plantation: a short story by Kevin Barry Illustration by Laura Carlin Listen – There’s a lock-in at the Connaught Arms, and every melodious old soak in town is inside the place, wall-eyed with drink and songful as crows – it’s three in the morning – and the liquid drunken notes float off and above the town – there are no women to be heard – and from the dark of the alleyway I can name each voice as it rises and taunts, and who have we now, cresting the happy babble, but Mr Cremins – Mr Teddy Cremins of the square jaw and the emotional shoulders – and he rants directions to the Highwood quarry at the top of his burly throttle:

Seeking Inspiration in Jane Austen’s World Photo Imprint By CHARLIE LOVETT 7 Short Stories by Junot Díaz Free Online, In Text and Audio As much as any contemporary writer of literary fiction ever does, Junot Díaz has become something of a household name in the years since his debut novel, The Brief Wondrous Life of Oscar Wao appeared in 2007, then went on to win the Pulitzer Prize, among other many other honors. The novel has recently topped critics lists of the best 21st century novels (so far), and the recognition is well-deserved, and very hard-won. Díaz spent a decade writing the book, his process, in the words of The New York Times’ Sam Anderson, “notoriously slow” and laborious. But none of his time working on Oscar Wao, it seems, was spent idle.

5 Odd Facts About Lewis Carroll Alice fell down the famous rabbit hole 150 years ago, after family friend Charles Lutwidge Dodgson (better known by his pen name, Lewis Carroll) told the story to the Liddell sisters on a boat trip down the Thames on July 4, 1862. Ten-year-old Alice Liddell, delighted by the tale, asked him for a written copy of the story. The rest is history. Carroll published the adventures in 1865, and the book hasn't gone out of print since. Here are five odd facts about Lewis Carroll (1832-1898), including his enthusiasm for word games, microscopes and photography. [10 Mythical Beasts That Might Really Exist] 1. The Short Story Podcasts Broadening the number of resources The Short Story brings its readers, we are extremely pleased to provide this set of podcasts, courtesy of the Florida Centre of Instructional Technologies (FCIT) from the University of South Florida (USF). In due time, we hope to provide a greater number and range of podcasts to TSS. If you would like to offer your own recordings, please contact us as at info@theshortstory.co.uk to discuss the details. This set of twenty five short story podcasts is from Sherwood Anderson’s influential short story collection Winesburg, Ohio (1919).

The 25 Best Opening Lines in Western Literature Introducing a story to a reader is a lot like dropping a pickup line on someone: do it the wrong way and they’ll wind up under the covers with a different… book. Here to show you how it’s done are the top twenty-five cold openings in Western literature. For some additional insight, we’ve included speculations as to the thought process that might have influenced each author’s writing. Enjoy! 1. Another Cotton Picking Day! by Norris Chambers (Old Timer's Tales) Very few people under the age of "Senior Citizen" have ever picked cotton. The cotton patch is now harvested by machine, about the same way as grain, potatoes and other back breaking gatherings. But it wasn't always that way. Cotton matured in the early Fall, and when it matured, that was the time to pick it.

New look for the short story Some of the UK's best young novelists are working with computer games designers to create digital short stories, each inspired by a classic work of literature but featuring games, blogs and web tools. The first of the six stories is Charles Cumming's The 21 Steps, based on John Buchan's classic thriller The 39 Steps. It uses Google Maps and Google Earth to follow the trail of a bewildered young Londoner who witnesses a murder and is forced to smuggle a mysterious liquid on to a plane. The We Tell Stories project has been created by Penguin in partnership with alternate reality games company SixtoStart. Other participating writers include Toby Litt, who was named as a Granta best young British novelist, Naomi Alderman, winner of the 2006 Orange prize for new writing, and Mohsin Hamid, whose The Reluctant Fundamentalist was shortlisted for last year's Man Booker prize.

List of forms of word play This is a list of techniques used in word play with Wikipedia articles. Techniques that involve the phonetic values of words Mondegreen: a mishearing (usually unintentional) ase as a homophone or near-homophone that has as a result acquired a new meaning. The term is often used to refer specifically to mishearings of song lyrics (cf. soramimi).Onomatopoeia: a word or a grouping of words that imitates the sound it is describingRhyme: a repetition of identical or similar sounds in two or more different words Alliteration: matching consonants sounds at the beginning of wordsAssonance: matching vowel soundsConsonance: matching consonant soundsHolorime: a rhyme that encompasses an entire line or phraseSpoonerism: a switch of two sounds in two different words (cf. sananmuunnos)Janusism: the use of phonetics to create a humorous word (e.g. BOREneo from Borneo)) Techniques that involve semantics and the choosing of words

20 Tips For Writing a Captivating Short Story (Part 1) by Mindy Halleck Today, as I edit, trim, cut, and otherwise obliterate a short story I wrote that ended up to be 8,000 words, but needs to be 5,000 words, I am reminded of this quote: “Not that the story need be long, but it will take a long while to make it short.” -Henry David Thoreau Wise man. From William Shakespeare to Henry VIII: The most visited grave sites in Britain revealed The remains of Richard III were laid to rest at Leicester Cathedral Famous resting places make popular tourist spots all over the UKShakespeare fans flock to his grave site at Stratford-upon-Avon A memorial statue for Pocahontas is visited by tourists at Gravesend By Emily Payne for MailOnline Published: 16:26 GMT, 26 March 2015 | Updated: 17:55 GMT, 26 March 2015 King Richard III was laid to rest in a ceremony at Leicester Cathedral today, and his final resting place is sure to become Britain's newest tourist attraction.