The Witcher. Books[edit] The short stories in The Witcher series were first published in Fantastyka, a Polish science fiction and fantasy magazine. 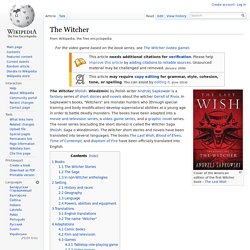 Category:20th-century American novels. From Wikipedia, the free encyclopedia Subcategories This category has the following 5 subcategories, out of 5 total. 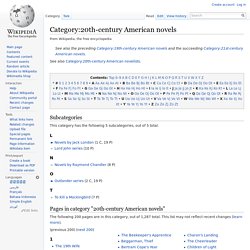 Pages in category "20th-century American novels" The King in Yellow. The British first edition was published by Chatto & Windus in 1895 (316 pages).[5] Stories[edit] The first four stories are loosely connected by three main devices: A fictional play in book form entitled The King in YellowA mysterious and malevolent supernatural entity known as The King in YellowAn eerie symbol called The Yellow Sign. 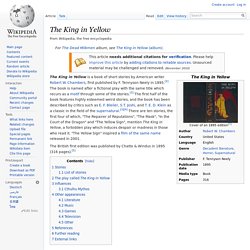 Robert W. Chambers. Robert William Chambers (May 26, 1865 – December 16, 1933) was an American artist and fiction writer, best known for his book of short stories entitled The King in Yellow, published in 1895. 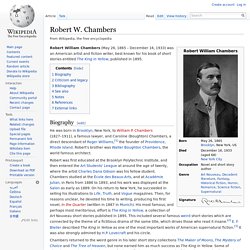 Biography[edit] Chambers returned to the weird genre in his later short story collections The Maker of Moons, The Mystery of Choice and The Tree of Heaven, but none earned him as much success as The King in Yellow. Some of Chambers's work contains elements of science fiction, such as In Search of the Unknown and Police!!! , about a zoologist who encounters monsters.[4] Chambers later turned to writing romantic fiction to earn a living. Jack Ketchum. Ketchum lives in New York City.[1] Biography[edit] Education[edit] Ketchum earned a B.A. 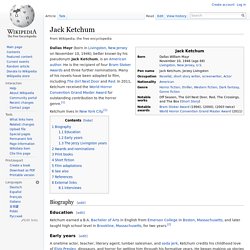 Bachelor of Arts in English from Emerson College in Boston, Massachusetts, and later taught high school level in Brookline, Massachusetts, for two years.[2] Antonin Artaud. Antoine Marie Joseph Artaud, better known as Antonin Artaud (French: [aʁto]; 4 September 1896 – 4 March 1948), was a French playwright, poet, actor, essayist, and theatre director.[1] §Early life[edit] Antoine Artaud was born 4 September 1896 in Marseille, France, to Euphrasie Nalpas and Antoine-Roi Artaud.[2] Both his parents were natives of Smyrna (modern-day İzmir), and he was greatly affected by his Greek ancestry.[2] His mother gave birth to nine children, but only Antonin and one sister survived infancy. 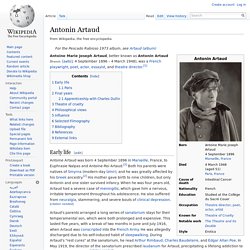 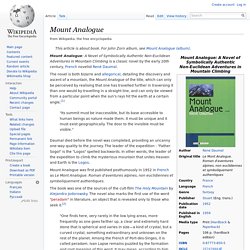 The novel is both bizarre and allegorical, detailing the discovery and ascent of a mountain, the Mount Analogue of the title, which can only be perceived by realising that one has travelled further in traversing it than one would by travelling in a straight line, and can only be viewed from a particular point when the sun's rays hit the earth at a certain angle.[1] "Its summit must be inaccessible, but its base accessible to human beings as nature made them.

It must be unique and it must exist geographically. Hardboiled. §Origin of the term[edit] The term comes from a process of hardening one's egg; to be hardboiled is to be comparatively tough. 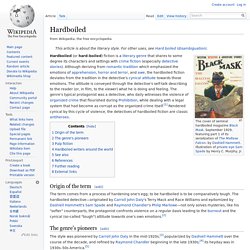 The hardboiled detective—originated by Carroll John Daly's Terry Mack and Race Williams and epitomized by Dashiell Hammett's Sam Spade and Raymond Chandler's Philip Marlowe—not only solves mysteries, like his "softer" counterparts, the protagonist confronts violence on a regular basis leading to the burnout and the cynical (so-called "tough") attitude towards one's own emotions.[2] §The genre's pioneers[edit] Philip Marlowe. Some of those short stories were later combined and expanded into novels featuring Marlowe, a process Chandler called "cannibalizing". 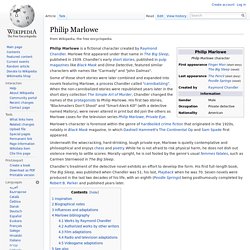 When the non-cannibalized stories were republished years later in the short story collection The Simple Art of Murder, Chandler changed the names of the protagonists to Philip Marlowe. His first two stories, "Blackmailers Don't Shoot" and "Smart-Aleck Kill" (with a detective named Mallory), were never altered in print but did join the others as Marlowe cases for the television series Philip Marlowe, Private Eye. Underneath the wisecracking, hard-drinking, tough private eye, Marlowe is quietly contemplative and philosophical and enjoys chess and poetry.

While he is not afraid to risk physical harm, he does not dish out violence merely to settle scores. Dashiell Hammett. §Early life[edit] Hammett was born on a farm called Hopewell and Aim in St. 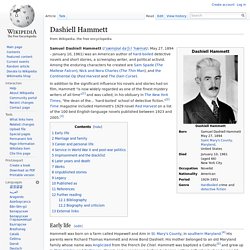 Mary's County, in southern Maryland.[4] His parents were Richard Thomas Hammett and Anne Bond Dashiell. His mother belonged to an old Maryland family whose name was Anglicized from the French De Chiel. Hammett was baptized a Catholic[5] and grew up in Philadelphia and Baltimore. "Sam", as he was known before he began writing, left school when he was 13 years old and held several jobs before working for the Pinkerton National Detective Agency.

Sam Spade. Spade was a departure from Hammett's nameless and less-than-glamorous detective, The Continental Op. Spade combined several features of previous detectives, most notably his detached demeanor, keen eye for detail, and unflinching determination to achieve his own justice. Portrayals[edit] Spade was a new character created specifically by Hammett for The Maltese Falcon; he had not appeared in any of Hammett's previous stories. Hammett says about him: Spade has no original. James M. Cain. James Mallahan Cain (July 1, 1892 – October 27, 1977) was an American author and journalist. The King in Yellow. Super-Toys Last All Summer Long. "Super-Toys Last All Summer Long" is a short story by British science fiction author Brian Aldiss, first published in 1969. The story deals with humanity in an age of intelligent machines and of the aching loneliness endemic in an overpopulated future where child creation is controlled.

§Plot[edit] In a dystopian future where only 1/4th of the world's overcrowded population is fed and living comfortably, families must request permission to bear children. Monica Swinton lives with her husband Henry and her young son David, whom she struggles to bond with. She seeks help from Teddy, a robot toy companion of sorts, to try to understand why she feels unable to communicate with David, let alone feel compassion for him. Hugo Award. The Hugo Awards are a set of awards given annually for the best science fiction or fantasy works and achievements of the previous year. The awards are named after Hugo Gernsback, the founder of the pioneering science fiction magazine Amazing Stories, and were officially named the Science Fiction Achievement Awards until 1992.

The King in Yellow. Outlander (novel) After separation by their work in World War II, British Army nurse Claire Randall and her husband Frank, a history professor, go on a second honeymoon to Inverness, Scotland, where Frank conducts research into his family history and Claire goes plant-gathering near standing stones on the hill of Craigh na Dun. The Thin Man. Trainspotting (novel) Trainspotting is the first novel by Scottish writer Irvine Welsh, first released in 1993. Category:Book websites. Category:Library 2.0. The main article for this category is Library 2.0.

Articles in this category describe innovative library-related services introduced about or after the year 2000, also known as Library 2.0. Ray Bradbury. §Early life[edit] Sleep diary. Wars of the Roses. The Shock Doctrine. The New York Trilogy. The New York Trilogy is a series of novels by Paul Auster. Something Wicked This Way Comes (novel) Something Wicked This Way Comes is a 1962 fantasy novel by Ray Bradbury. Flowers for Algernon.